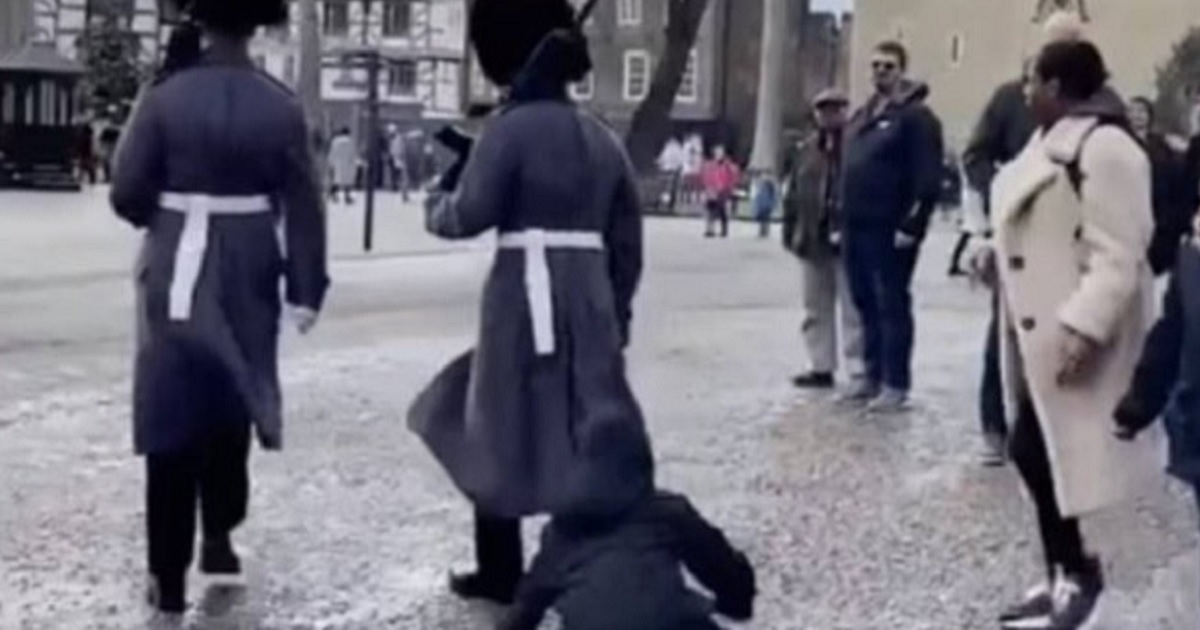 The following article, Watch: Child Caught in Path of Marching Queen’s Guard Bowled over by Patrolling Troops, was first published on Flag And Cross.

One child in London last week got to star in a viral video.

All it took was getting flattened by a member of the Queen’s Guards at the Tower of London.

The TikTok video shows the ceremonial ritual of the guards, with their distinctive red uniforms replaced by long gray coats for the winter, stomping along as tourists gather to watch.

As the two hand-swinging guards came into view, the guards in their bearskin hats marched in perfect tandem until one suddenly collides with a child.

A Guardsman can be heard calling out a warning as the collision takes place.

For a moment, the child became entangled in the legs of the soldier, but not for long.

Without a backward glance, the Guardsmen moved on, keeping in step as an adult checked on the welfare of the child,

A spokesman for Britain’s Ministry of Defense explained the guard’s side of the incident, according to the Daily Mail.

“We are aware of an incident at the Tower of London earlier today during a routine patrol,” the spokesman said Wednesday, according to the newspaper.

“The Guardsmen on duty warned members of the public that a patrol was approaching but the child unfortunately ran out in front of the soldier unexpectedly. The soldier tried to step over the child and continued on his duty,” the spokesman said.

The Queen’s Guard are responsible for protecting royal residences and have a pretty no nonsense approach when tourists get in the way (which happens often), however this particular non-threatening incident seems a little unnecessary. Was it *that* important to stay in formation? pic.twitter.com/0xxngDyzgT

Although it’s not shown in the video posted to TikTok, the spokesman said a check was made to be sure the child was not hurt.

“Following the incident, the soldier checked on the child and was reassured that all was well,” the spokesman said.

This feels like a metaphor for the monarchy’s overall attitude towards their subjects https://t.co/hMjrU2hKuz

Controversy Over Viral Video Of Child Getting Trampled By UK Royal Guard
–I don’t understand what the kerfuffle is about. The guards at the Tomb of the Unknown Soldier DEMAND respect! Next time Junior will be alert when the Queen’s guards are present.https://t.co/uWuuKbMkbn

The user on TikTok who shared the video wrote, “My sister went to England, first day in.”

One poster who viewed the video added a criticism of the Guardsman: “Just no need for this.”