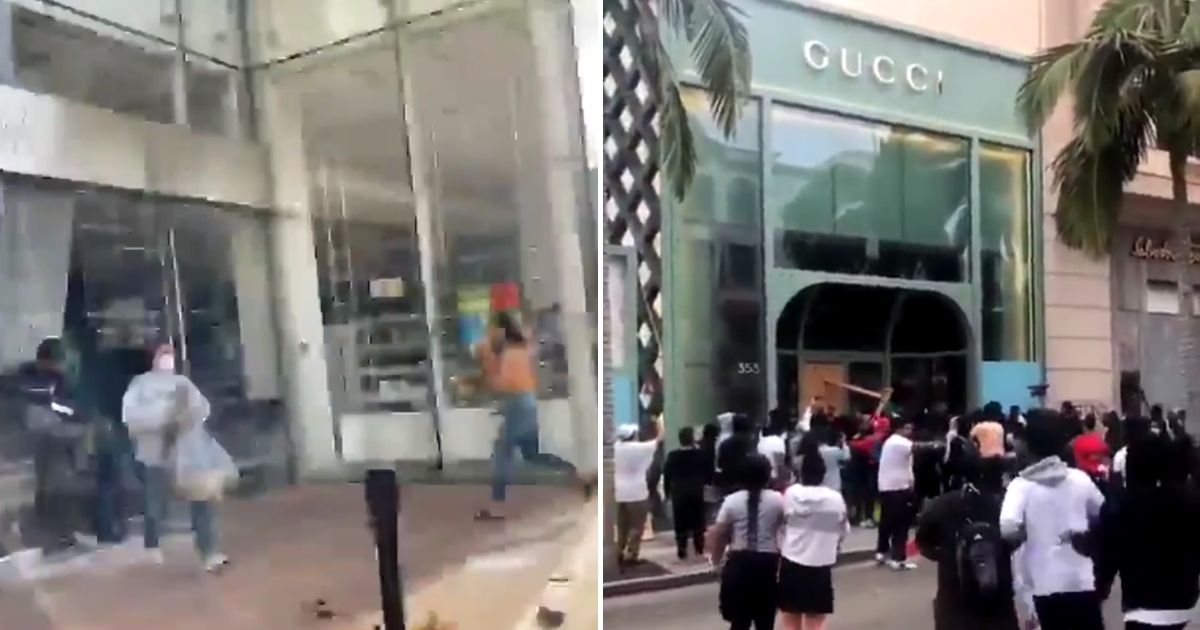 The following article, Terrified Elites Flood Beverly Hills’ Only Gun Store as Chaos Grows in California, was first published on Flag And Cross.

The home-security industry is booming in Beverly Hills, California, thanks to the frightening crime waves ravaging the Democrat-run state.

Russell Stuart, the owner of the only gun store in the posh Los Angeles suburb, said residents have been rushing out en masse to buy firearms amid the smash-and-grab robberies infesting the liberal city.

“This morning I sold six shotguns in about an hour to people that say, ‘I want a home defense shotgun,’” Stuart told Los Angeles Magazine on Wednesday.

“Everyone has a general sense of constant fear,  which is very sad. We’re used to this being like Mayberry.”

Since opening in July 2020, Stuart said his shop has been barraged by anxious locals who are terrified of being targeted by lawless thugs.

This is ironic because California — like other liberal states — has among the strictest gun control laws in the country, and its residents are among the most vocal opponents of the Second Amendment right to bear arms in self-defense.

The catalyst for the surge in gun purchases, Stuart said, was the May 2020 Black Lives Matter riot, where gangs of marauding looters ransacked stores in Beverly Hills.

Now that California has devolved into a lawless hellscape thanks to destructive left-wing policies, the scales have finally fallen from residents’ eyes.

Breaking: Widespread looting is ongoing at The Grove in Beverly Hills, California. Rioters have set a police outpost outside the mall on fire. pic.twitter.com/aIoNlayQFt

Looting on Rodeo Drive now too. Gucci broken into. pic.twitter.com/1qbHnkfqA3

For everyone messaging me “How do you know it’s BLM?” pic.twitter.com/6I6Pfj1T5L

These distressing crime sprees have been a boon for gun-shop owners and home-security companies.

Stuart, who also owns a home-security company, said one of his clients even asked about having an armada of automated drones to hover over his mansion.

As we’ve seen in recent months, Californians are not safe from criminals even right on their doorstep.

A mom with her baby in a stroller is robbed by two crooks who follow her home. @ABC7Leanne live in #HancockPark with new calls for action to fight brazen #followhome bandits bringing their dirty deeds to your front door. Tonight at 11 from ABC7 https://t.co/4O4tJf6ZQH pic.twitter.com/f0Wh2jlPHf

Accordingly, he advises his clients to be low-key whenever they step outside their homes.

Debbie Mizrahie, a resident of Beverly Hills, said she and her family are worried sick about being burglarized or murdered.

“I’ve always been anti-gun,” Mizrahie told the New York Post earlier this month. “But I am right now in the process of getting myself shooting lessons because I now understand that there may be a need for me to know how to defend myself and my family. We’re living in fear.”

Mizrahie said a turning point was when her neighbor’s home was firebombed with Molotov cocktails during last year’s Black Lives Matter protests.

“My kids were outside and they saw a huge explosion,” she recounted. “[The neighbor’s] backyard went up in smoke. Trees burned down … But it’s only gotten worse. Beverly Hills has been targeted.”

“It’s gotten to a point where residents feel insecure even going from their door to their car,” Reitman told the Post. “A lot of residents are applying for a concealed carry weapon permit, even though that’s a great challenge in LA County.”

The appalling crime waves ravaging liberal cities affirm what conservatives have said all along: that defunding the police, stoking race wars, eliminating bail and going soft on crime is a recipe for disaster.

Bending the knee to race-baiting mobs like BLM and demonizing law enforcement is an existential threat to all Americans, including the delusional limousine liberals who think they’re exempt from the grim consequences of their destructive rhetoric.