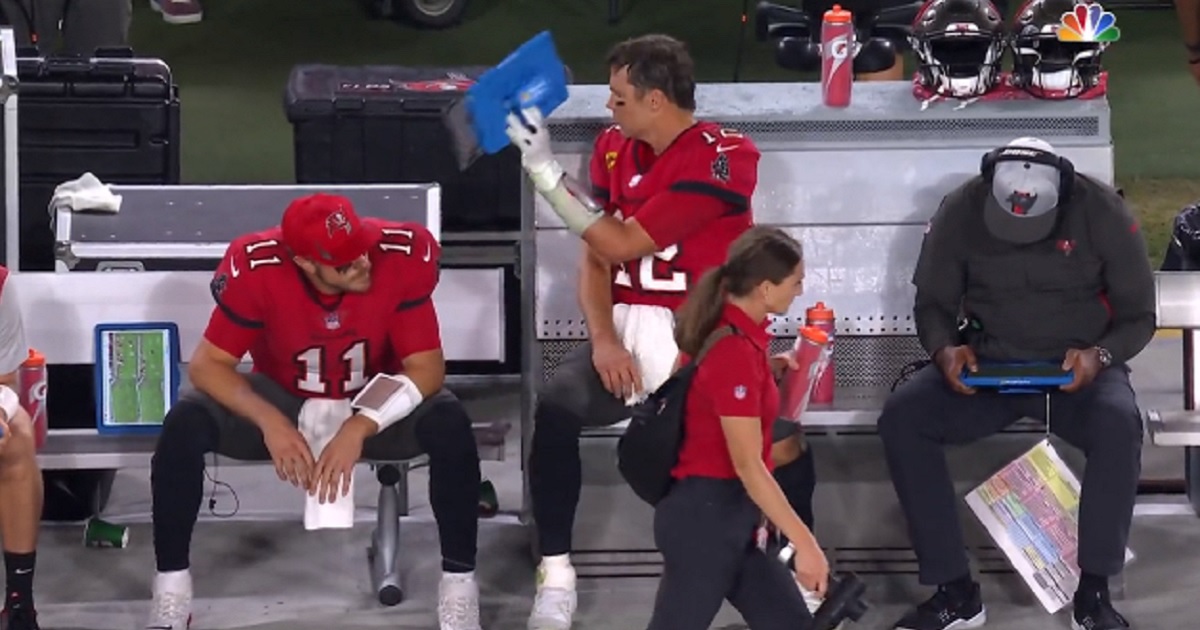 The following article, Video: Tom Brady Erupts in Destructive Sideline Tantrum During Worst Game in 15 Years, was first published on Flag And Cross.

When the lights come on, that is usually when Tampa Bay Buccaneers quarterback Tom Brady excels. This was not the case in Sunday night’s embarrassing 9-0 loss to the New Orleans Saints.

According to ESPN, Brady completed just 26 of his 48 passing attempts and mustered just 214 yards. He added an interception and a lost fumble to the mix.

All of those factors resulted in Brady’s Bucs scoring 0 points. It was the first time Brady had been shut out in 15 years.

Throughout the game, Brady made his frustrations very well known. After throwing his interception, he was seen spiking the team’s Microsoft tablet on the sideline.

Tom Brady threw the tablet after his INT

At another point, Brady ran over to the Saints sideline and appeared to tell a coach, “Go f*** yourself.”

Looks like Tom Brady goes to the #Saints sideline and says: “Go f*** yourself.” pic.twitter.com/CA2tDakqXn

In a third incident, Brady screamed in the face of one of the officials in apparent disagreement with his decision.

So Tom Brady goes off on refs; then slams/breaks a Microsoft Tablet; & runs to Saints sideline to curse out a Saints coach — all in one game.
IDC how many SB’s he won. Write about it as if he were Lamar Jackson pic.twitter.com/1RuWsIWehR

Throughout his record-setting career, Tom Brady has seen the Saints become a thorn in his side. Since joining the Buccaneers in 2020, he has an 0-4 record against the Saints in the regular season, Pro Football Talk reported.

While Brady did defeat the Saints in the postseason en route to a Super Bowl last season, his overall record against the Saints as the Buccaneers quarterback is hardly awe-inspiring.

The game was not the only thing the Buccaneers lost on Sunday night. According to a separate ESPN article, the team lost its top two receivers, Mike Evans and Chris Godwin, to injuries in the first half.

In the second half, running back Leonard Fournette, who has enjoyed a breakout season, also left due to injury.

“I wish it was just one thing,” Brady said, according to ESPN. “It was a lot of things. We’ve gotta do better in every facet of offensive football to score points. We’re not gonna win scoring no points.”

In a night full of losses, Brady losing his temper may prove to be the most memorable. As the playoffs near in the NFL, he will be tasked with resetting and leading the Buccaneers into the final postseason push.