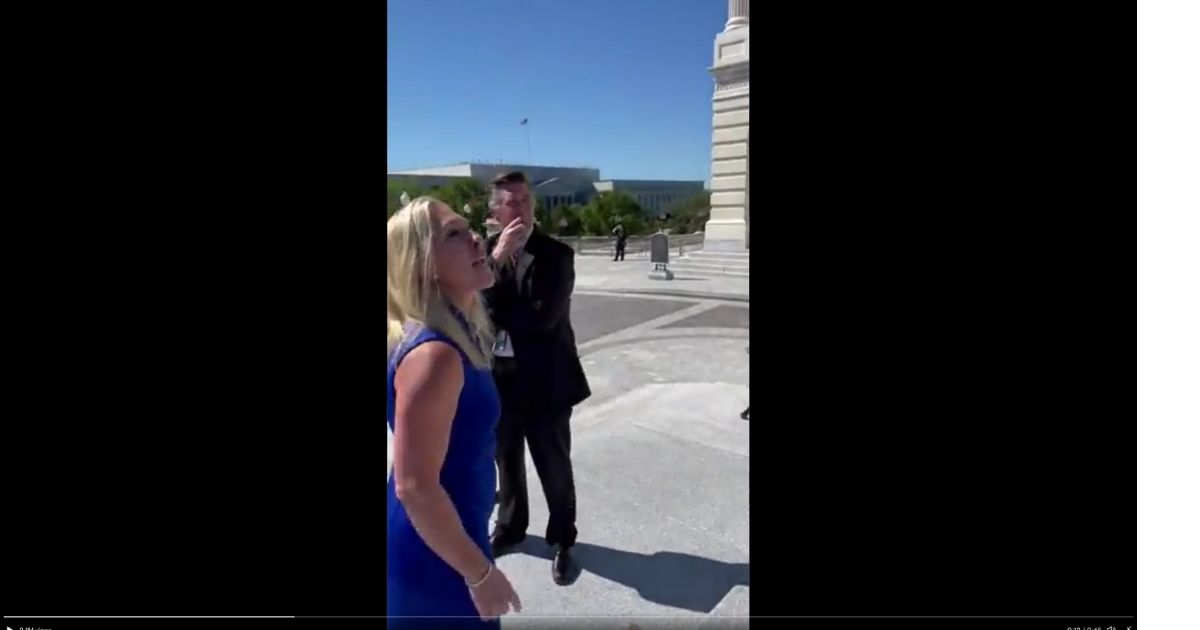 “Oh, I know exactly what this is — the left calls this a white supremacist party.”

So said Republican Rep. Marjorie Taylor Greene of Georgia about the four-day America Fest 2021 put on in Phoenix in recent days by the conservative campus grassroots organization Turning Point USA.

“When I walked in yesterday, I said, ‘What kind of people come here?'” she began.

“So I’m walkin’ around and seeing some good people, and I see white people, black people, brown people …”

“And then there’s talk of freedom, and loving America, and conservative principles. Some crazy people in here were talking about how much they love this guy named Jesus,” she said.

“And … I think I heard that a lot of people here like a guy named Donald J. Trump.

“And then I said: Oh, oh I know exactly what this is — the left calls this a white supremacist party.”

Marjorie Taylor Greene suggests the presence of “yellow people” and other groups at TPUSA’s #AMFEST2021 means it’s not a “white supremacist party.” pic.twitter.com/78N9KB9UdS

Marjorie Taylor Greene suggests the presence of “yellow people” and other groups at TPUSA’s #AMFEST2021 means it’s not a “white supremacist party.” pic.twitter.com/78N9KB9UdS

Greene’s remarks reflected the ongoing reality of growing numbers of minorities joining the conservative movement — or at least allying themselves with conservative values.

Unknown to or not publicized by Democratic strategists, there are tectonic shifts in the Republican Party that go beyond the recognized morphing of the GOP base into the party of the working class and small business.

Minorities — especially Hispanics — are increasingly supporting Republicans, and there has been a growing movement in that direction among black Americans. The move appears to be taking place because these groups recognize the GOP represents values held by growing numbers of middle-class minorities.

That image runs counter to the stereotypes of Republicans as the party of white supremacy and big business.

Conversely, Democrats no longer represent the middle class, and in addition to subsidizing the poor, they have sidled up to the interests of the coastal elites whose ties to Europe and especially China have aided in hollowing out the economies of the nation’s midsection, as analyzed by Victor Davis Hanson in an article for The Providence Journal.

Full disclosure demands I tell you I am active in the Republican Party at the county and state levels.

It also means I can expand on observations made by Greene at America Fest 2021: The growing racial diversity among conservatives and ongoing love of country and patriotism, coupled with a strong Christian influence and appreciation for Donald Trump, are also present among grassroots Republicans.

And Turning Point USA is apparently becoming effective at colleges and high schools in organizing young people for conservative activism.

Recently, our local Republican committee organized a joint meeting with Turning Point USA, and of the some 200 people there, perhaps half of them were under age 30.

So effective was the America Fest 2021 meeting, that one columnist for Azcentral, Elvia Diaz, lamented that Democrats have planned nothing similar to stir up their base.

“I get that the Democrats who control the White House and Congress are busy trying to govern under a thin-razor majority,” Diaz wrote.

“But it is also clear that they aren’t connecting with voters with the same vigor, passion and determination as Trump’s Republicans.”

And Diaz wondered if Democrats even know who their base is.

“That brings me to another burning question: Who are the Democrats’ base, nationally and in Arizona? We just don’t know,” she wrote.

“They may say they’re casting a wider net that includes everybody — white voters, independent voters, Latino voters, Black voters, and on and on.

“But their actions and lack of a cohesive strategy — that we could tell, anyway — to target those in that wider net say otherwise, and that spells trouble for them at the polls,” Diaz said.

Maybe more Democrats of all races, ethnicities and social classes have joined Greene and all those other “white supremacists.”