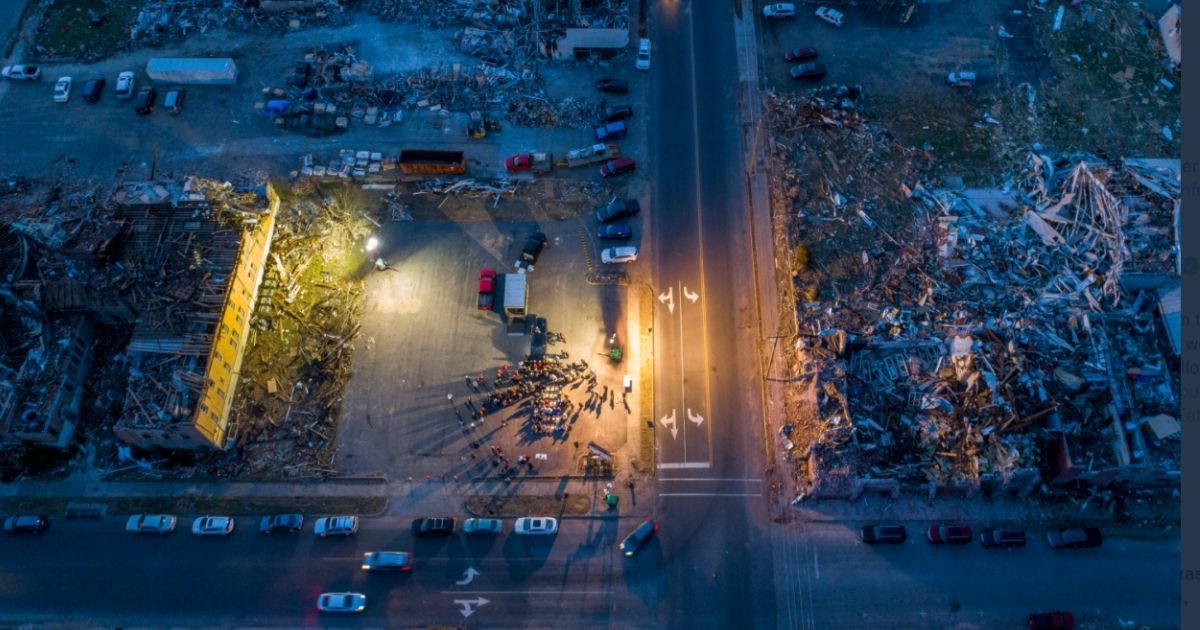 The following article, Congregations from Destroyed Kentucky Churches Meet at Lot That Used to Separate Them, Give Thanks to God, was first published on Flag And Cross.

The early December tornadoes that struck the Midwest couldn’t stop two Kentucky congregations from coming together to honor the Lord this Christmas Eve.

In an empty lot between their destroyed churches, two congregations came together tonight for a joint Christmas Eve service in Mayfield, Kentucky. @heraldleader pic.twitter.com/m6UUm0MeU0

Around 100 people took part in the parking lot service that evening in the lighting of generator-powered lamps, the Lexington Herald-Leader reported.

The service was an opportunity for the two congregations to bid farewell to the buildings that had housed them for many years.

After the reading of a few scriptures and communion to commemorate the death and resurrection of our Lord Jesus Christ, First Christian Church Senior Pastor Dr. Milton West delivered the liturgy.

West highlighted that though the congregations were closing their buildings, the closures were not the “closing of a ministry.”

“We will stop and we will shed a tear, but we will also see this as an opportunity,” West said, according to the Lexington Herald-Leader. “An opportunity to rise from the ashes of the loss of a building, to reclaim our place in this community and to bring our understanding of faith to succeeding generations.”

“What lies ahead for both congregations will be one of the most challenging things you will ever undertake, and if we do it together, it will last,” West told the congregations.

After saying one last goodbye to their buildings, the congregations sang the Christmas song “Silent Night.”

West concluded the service by telling those who had gathered there to “Go in peace, and share the light and love of Christ.”

Two weeks before the service, a powerful “historic” long-track EF-4 tornado tore through Western Kentucky, according to information from the National Weather Service, leaving destruction, death and injury in its wake.

The twister came from the direction of Tennessee on the night of Dec. 10, National Weather Service data shows. It first struck Cayce, Kentucky, before entering Mayfield at around 9:25 p.m., causing severe damage there.

Around 76 people lost their lives in Kentucky because of the tornados. Eight died in a candle factory in Mayfield, The Guardian reported.

“Smaller tornadoes bounce, but an EF-4 stays on the ground,” Mayfield property owner Hoot Gibson told the outlet. “The only difference between this and an atom bomb is that a bomb would have fried people.”

“First-light drone footage of the wreckage showed chaotic scenes of twisted metal and trash and shattered lumber. I couldn’t even identify the remnants of the buildings in downtown Mayfield,” The New Yorker contributor Bobbie Ann Mason wrote in a reflection piece on the wrecked town. “A friend who had served as a diplomat in Afghanistan told me that the scenes looked even worse than a war zone.”

“[A] spirit of generosity and kindness prevails,” Mason wrote, as she described how the tragedy also shed light on human goodness in tough times.

“Within hours of the disaster, help began flowing in. People all over the country packed their vehicles with supplies and headed for Mayfield. The fairgrounds, where I used to go to the harness races with my granddaddy, filled up with supplies. Pallets of water. Pet food. Bedding. The pavilions were stocked with clothes, toiletries, food, and medicine. Corporations sent food trailers.”

To help tornado survivors, especially children, celebrate Christmas despite the heavy losses they encountered because of the twister, Operation BBQ Relief, a nonprofit, helped bring Santa to town, giving out toys and clothes to families and children, KFVS-TV reported Saturday.

With the help of volunteers nationwide, the NGO also organized food for the survivors, according to the outlet.

Continue reading: Congregations from Destroyed Kentucky Churches Meet at Lot That Used to Separate Them, Give Thanks to God ...