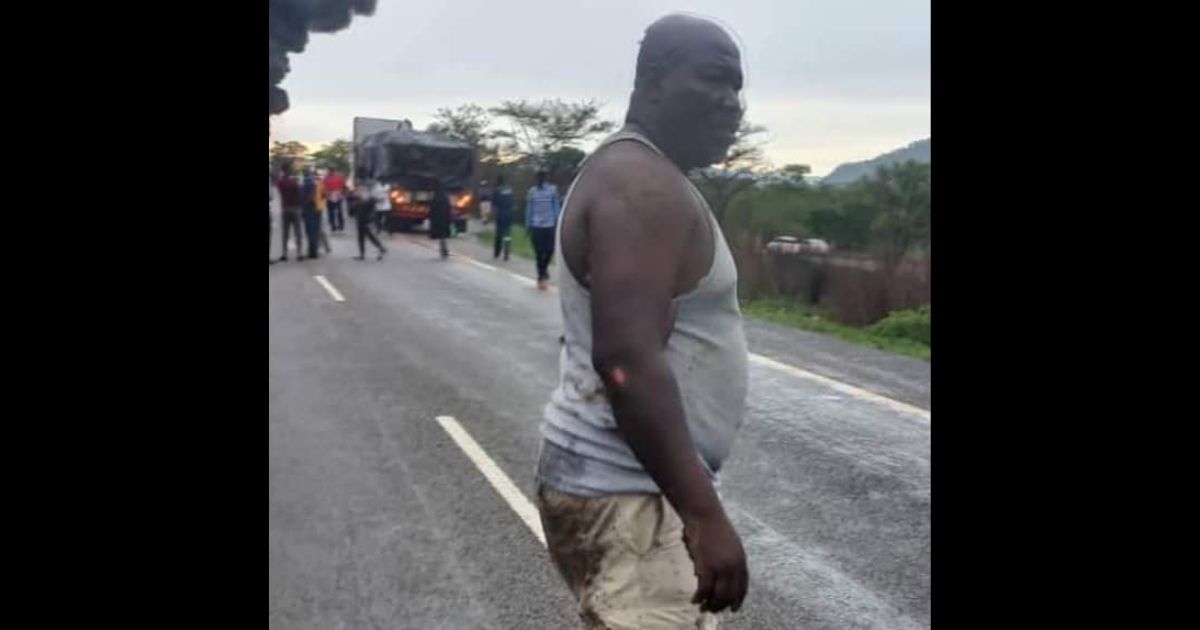 The following article, After Seeing Bus Engulfed in Flames, Man Scrambles and Rescues 8: Gets Shock Surprise, was first published on Flag And Cross.

When Sirizani Butau of Kadoma, Zimbabwe, came across a horrific crash on Christmas Eve, he didn’t hesitate to throw himself into danger to help save the victims.

Butau, a truck driver, was driving on the Harare-Mutare Highway when he saw a bus and a fuel tanker collide. The resulting fire put dozens of people’s lives at risk.

He ran to the bus and helped pull at least eight people from the wreckage, according to My Zimbabwe. Butau even tried to rescue the driver of the fuel tanker.

Five people ended up dying in the accident, and 60 were taken to the hospital.

A photo of Butau has gone viral. It shows him standing in the roadway, barefoot, a column of black smoke rising from the accident behind him, his legs and arms covered in serious burns.

The hero was taken to the hospital, where he was treated for third-degree burns.

His brother, Trevor, spoke on his behalf, saying, “At the moment he is unable to talk because he is being attended to by doctors, what we can say is he is overwhelmed by the kindness and love from across Zimbabwe, he never sought to be a hero and he does not feel like one.”

Fellow Zimbabweans started a crowdfunding effort for Butau and soon hit the limit. Still others have started other fundraising efforts for him and have asked the government to cover his medical expenses.

“I am humbled by the response,” Butau said from his hospital bed, according to The Herald in the capital of Harare. “It is something I never expected. My preoccupation on the day was to help and unfortunately got injured in the process, but I am doing well.”

“It’s quite humbling,” his wife, Wadzanai Butau, said. “I wish I could be able to do the same to others in need.

“My husband is a truck driver. On this day he was travelling from Beira to Zambia. When he called I intended to travel that night, but he dissuaded me from doing so. I travelled the following day with some relatives to Mutare where by then he had been admitted to the hospital.

“We requested the medical doctors to discharge him so that he will be treated in Kadoma where we reside because his continued stay in Mutare would have taken a toll on us in terms of accommodation and other related costs. At the moment we are in Kadoma at a private hospital where he is being treated. He is recovering well.”

“I am truly shocked and saddened by news of yesterday’s crash near Mutare, which took 4 lives too soon,” Mnangagwa tweeted on Christmas. “May their souls rest in eternal peace.

“To all those travelling this holiday season, please stay safe and remain vigilant.”

Let me take this opportunity to appreciate Sirizani Butau who saved people from the Mutare Accident .As government we will honour him for his selfless sacrifice. pic.twitter.com/bb2qU6NvWO

“Let me take this opportunity to appreciate Sirizani Butau who saved people from the Mutare Accident,” he tweeted on Sunday. “As government we will honour him for his selfless sacrifice.”