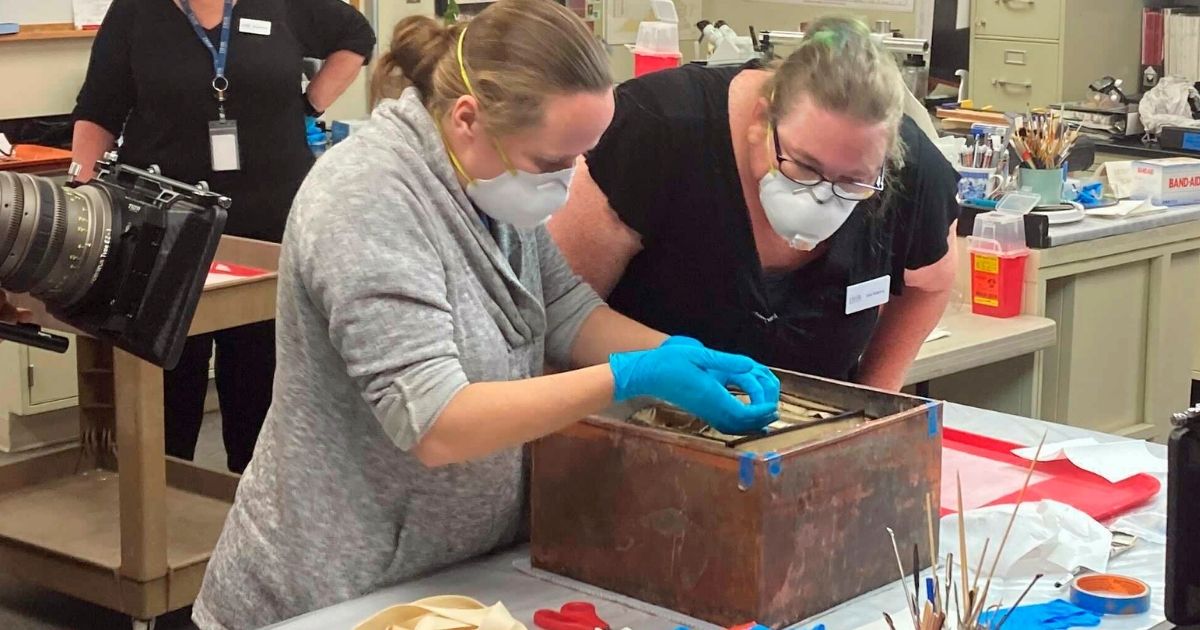 The following article, Watch: Civil War Time Capsule Being Opened for 1st Time in 130 Years, was first published on Flag And Cross.

Over 130 years ago, beneath the site of a now-canceled statue of Confederate Gen. Robert E. Lee, a group of Virginians buried two time capsules so that future generations would have an important link to their past.

In the grand scheme of world history, 130 years is a very short period of time, but in the short-yet-revolutionary period of history during which the United States has existed as a nation, these last 130 years have been world-shaking.

We have come so remarkably far as a nation and a people, and yet while we have much to learn from our recent past, these days sadly, as evidenced by the removal of controversial historical monuments like Lee’s statue, history isn’t examined so much as demonized and erased.

On Tuesday, a group of conservators opened what was the second time capsule found by the crew that is working to remove Lee’s statue on Monument Avenue in Richmond, Virginia, as NPR reported.

History buffs and nerds watched with bated breath as experts carefully opened the copper box, which NPR noted had evaded the crew that searched for it for months.

The conservators from the Virginia Department of Historic Resources showed the world what Victorian-era Richmond residents had collected to be buried in 1887, much of which was Confederate memorabilia and artifacts from the Civil War period as well as several documents.

“One book was called ‘The Minutiae of Soldier Life,'” NPR reported. “They found a Bible and an 1887 Almanac. Another booklet was called ‘Army of Northern Virginia Memorial Volume 1880.’ Two booklets were in a small container together: Chamber of Commerce reports from 1886 and 1887.”

There were also Masonic artifacts and a pamphlet, coins, various kinds of money and an 1884 commemorative ribbon which was used as a bookmark that featured a likeness of Lee.

Many of these items were expected; however, a potentially priceless photograph of Abraham Lincon before he was buried did not appear to be in the box.

“Conservators also found pages from an April 29, 1865 issue of Harper’s Weekly that featured a printed image appearing to show a person grieving over the casket of Abraham Lincoln,” NPR added. “There was speculation that the box may have contained a rare photograph of Lincoln in his coffin, though they did not find it upon their initial unpacking on Tuesday.”

It honestly takes my breath away to imagine what it must be like to carefully extract a newspaper, coin or book from this historical treasure box, knowing that it was carefully placed there so long ago by hands that had lived through one of the darkest and most important periods of American history. Their intention was that future generations could benefit from the preservation and discovery of these relics.

I wonder, however, what the people who preserved these priceless artifacts for us would think if they knew the state of American discourse surrounding our nation’s hard-fought civil liberties and victory over slavery and institutionalized racism.

As a Christian homeschool mom, one of the things I appreciate the most about studying history with my children with a biblical worldview is being able to see, throughout the grand drama of human history, that there has never been a period of time during which mankind has not been fallen and capable of sinning against God and fellow man.

Even history’s greatest kings and leaders had falls and setbacks, and even the most glorious endeavors mankind has undertaken to improve the conditions in this dying world are full of moral complexities and nuance.

I believe one of the greatest intellectual crimes currently being committed by our secular society is the oversimplification of several centuries of struggle against the institution of slavery and its legacy in our country.

How soon might it be before someone is spinning this impressive historical find, this deliberate act on the part of past generations of Virginians to preserve part of their history, as evidence of our nation’s irredeemable sins rather than a valuable peek into the past?

Already the comments left on Virginia Governor Ralph Northam’s tweet sharing the live opening of the capsule indicated that the event evoked references to things like the 1619 Project, which argues that our nation was founded on deep-seated institutional racism, despite the fact that the slaves first transported to what would become the U.S. in 1619 were likely captured and sold into slavery by other Africans.

Despite the leaps and bounds that the western world had undertaken to free the slaves and combat racism by 1890, it appears that there are many today who can’t look back on the last century-and-a-half without seeing only racism.

The reason this is so dangerous is that they are blind to the tremendous efforts all of our ancestors took to end the institutionalization of this grievous sin.

What’s more, I do not believe that we moderns can possibly grasp the weight of the Reconstruction period and the efforts made to raise up monuments to Confederate leaders and to heal the great bloody divide that the Civil War created in our country.

It seems horrific to us today to pay homage to men who fought to protect the Southern States’ right to maintain the institution of slavery, and there are certainly many worthy arguments to be made that perhaps these monuments need no longer remain intact.

However, we cannot simply erase or demonize our history; already, important American figures well deserving of our homage like Thomas Jefferson or Teddy Roosevelt are being treated with the same scorn as Confederate leaders, something which is grossly and abhorrently misguided.

Our history is full of painful and difficult occurrences, there is no doubt. It is fallacious, however, for proponents of things like critical race theory and the 1619 Project to paint what they offer as the “real” history of our country. They erroneously and shamefully link racism to the driving motivation of our Founding Fathers. Worse than that, they link racism to white people as a whole, despite the thousands upon thousands of white people who worked hard, many unto death, to end slavery and preserve a Union that could move forward.

The real history of our nation is a history of a people who have fought hard to be defined by their deeds and not the color of their skin, to overcome class and racial prejudices and ensure that all men are treated equally as the Good Lord created them, so that the original vision of the Founding Fathers could be seen through to fruition.

We would not be where we are as a nation without the legacy of men whose history we now view as problematic, so how can we possibly hope to progress toward a more perfect union by demonizing our forefathers?

You know what they say: Those who don’t know their history are bound to repeat it. I grow more concerned by the day that the fate of those who oversimplify and misrepresent our history may be even worse.