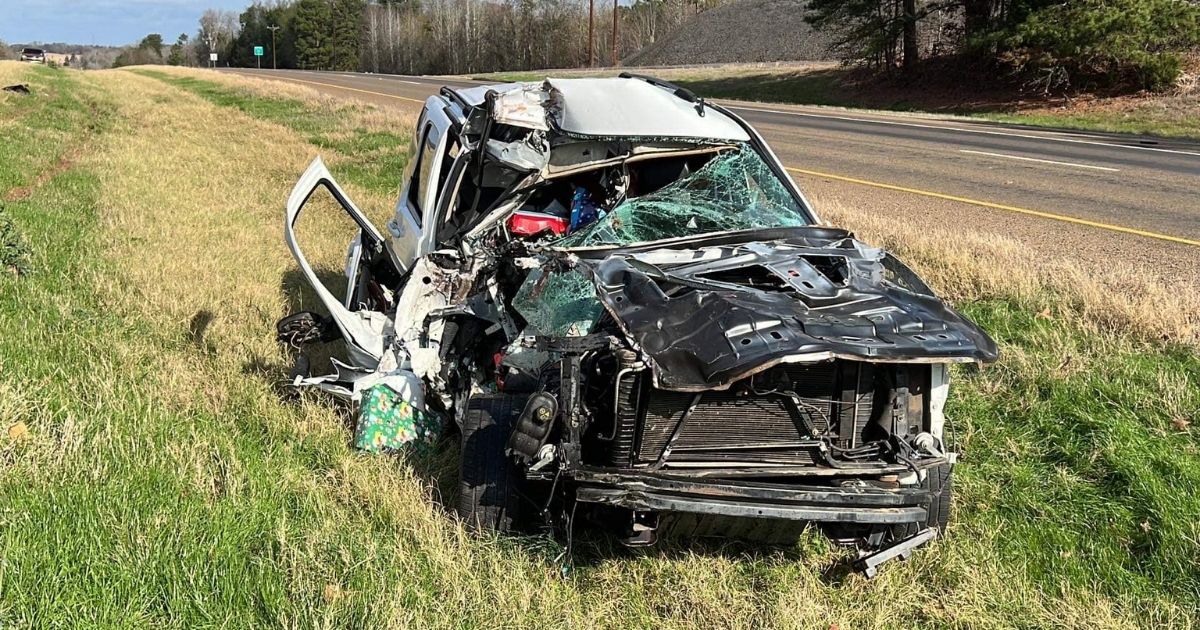 The following article, ‘Christmas Miracle’: No One Seriously Injured After ‘Major Vehicle Collision’ on Christmas Day, was first published on Flag And Cross.

During certain times of the year, it’s much more common to see tractors and other large farm equipment on public roads in rural areas as they move from field to field.

They’re pretty slow-moving, though, and many agencies warn drivers in rural areas to drive carefully, as mixing large, slow equipment and fast cars can be a bad combination.

That combination is what led to a major crash on Saturday in Rusk County, Texas — and given the state of the vehicles involved, it was a Christmas miracle that no one was severely injured.

“Crims Chapel VFD is responding to a crash involving a vehicle and a tractor on US Highway 259 North at CR 236,” it wrote. “Please use caution in the area.”

Photos show a crumpled white SUV, most of its front torn off, the windshield broken, the passenger door hanging off the car and presents spilling out.

The damage to the car looks catastrophic — but someone was watching out for the people involved.

“Update: By a Christmas miracle, no one was seriously injured in this crash,” the post continued. “An SUV struck a large tractor pulling a bush hog. The roadway is being cleared of oil and fluids and will be reopened soon.

“Final update: @ 11:37, As stated previously, It truly was a Christmas day miracle in which neither of the occupants of these two vehicles were seriously injured in this major vehicle collision on US Hwy 259 and CR 236 in Rusk County,” the department posted.

“The roadway was cleared of as much debris as possible, but ask that you use caution as the hydraulic oil could still leave the roadway somewhat slick. Thank you for the fast response by Wayne Griffith’s Towing. All units are now clear of the scene and roadway is fully open.”

According to Iron Solutions, disasters between farm equipment and cars can take only seconds to develop.

“If a car is traveling 60 mph and approaching a tractor from behind that is traveling 20 mph, it only takes 6.5 seconds for the car to travel 400 feet and meet the rear of that tractor….….not much time,” its website says.

The equipment industry site also urged anyone driving near farm equipment to be very cautious when attempting to pass the slower-moving vehicles and to keep a safe distance back.

Thankfully, both parties involved in this particular accident were able to celebrate another Christmas, and hopefully they won’t have this close a brush with disaster again.