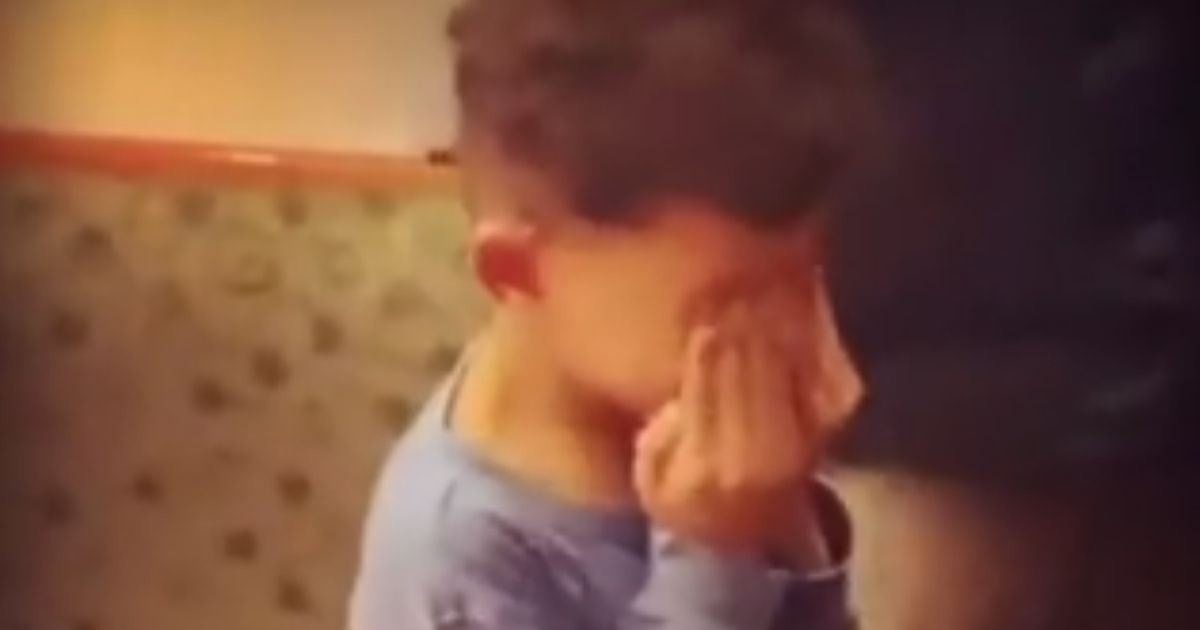 The following article, Watch: Frightened Child Cries As Police Force Him from Restaurant Due to Mandate, was first published on Flag And Cross.

If the command “your papers please” sounds like a movie line from the 1980s, you haven’t been paying attention. A video posted on Twitter shows a group of NYPD officers demanding that a family either produce papers proving they have been vaccinated for COVID or leave a restaurant.

There is a third alternative: getting arrested.

The video opens with a frightened child attempting to comply to the NYPD orders. It escalates when a woman, apparently the person taking the video, begins to berate the officers.

NYPD kicks out a child for not having a vaccine passport.

The police tell the other diners in the restaurant that they either have to have proof of vaccination or leave the restaurant. Failing that, they will be arrested for trespassing.

The NYPD officers in the video are polite and following orders from above. The family in question put the officers in a tough spot by failing to comply to the vaccine mandate. However, the woman presumably filming the incident does have a valid question when she asks, “Is this what justice looks like?”

This isn’t about COVID so much as it is about society. When politicians elect to arbitrarily require proof of vaccination of all citizens if they are to be allowed to “freely” participate in society — go to restaurants and movies — it’s bound to cause strife.

COVID is a serious matter, and it makes sense for some people, those who have underlying conditions or who fall into high risk groups, to get vaccinated. Requiring everyone to be vaccinated, even children, however, is overkill to say the least. Humans are not bees in a hive. The one-size fits all approach makes no sense, and people need things to make sense.

When things don’t make sense, it makes people uneasy because they are confused, and confusion breeds suspicion.

In Feb. 2021, The Heritage Foundation posted visuals that put the pandemic in perspective.

“According to data from the Centers for Disease Control and Prevention,” the Heritage post begins, “COVID-19 is deadliest among older populations. In fact, through February 17, 93 percent of COVID-19 deaths nationwide have occurred among those ages 55 or older. Only 0.2 percent were younger than 25. This trend can also be found on the state level.”

That’s less than a year ago. Has something changed?

One thing is for sure, something’s not right. People sense this. The police know it. The citizens know it. It’s not their fault.

If the 1980s seem like a time from a world far, far away, they’re not. “Your papers, please,” was a line used to depict the totalitarianism that had run rampant in the twentieth century. Remember the Nazis? The Communists? Pol Pot?

Filmmakers often use humor as a warning to avoid the mistakes of the past, as they did in the 1984 film Top Secret! In the movie, Val Kilmer is asked for his papers before witnessing a man gunned down in the streets by German soldiers. The man’s crime: He was carrying a bundle of dog bones.

Apparently, the information that is top secret today is why the government officials have concluded that American citizens are too dumb to figure out individually, with the help of their doctors, the pros and cons of getting vaccinated. Does the government have secret medical evidence that they are keeping from the public?

This is no comedy.

I predict that 30 years from now, though, if the U.S. can still claim to be the Land of the Free, some filmmaker will make a comedy out of Mayor Bill DeBlasio’s handling of COVID in New York City.  It’s not funny now. Just like the totalitarian regimes of the twentieth century were not funny for the oppressed citizens who endured them.

To answer the woman in the Twitter video’s question, “Is this justice?” I’d have to say no. Far from it.

The NYPD and the citizens of NYC are in a tough spot. They need to come together for the sake of the freedom America was founded upon. Globalist politicians be damned.

Continue reading: Watch: Frightened Child Cries As Police Force Him from Restaurant Due to Mandate ...