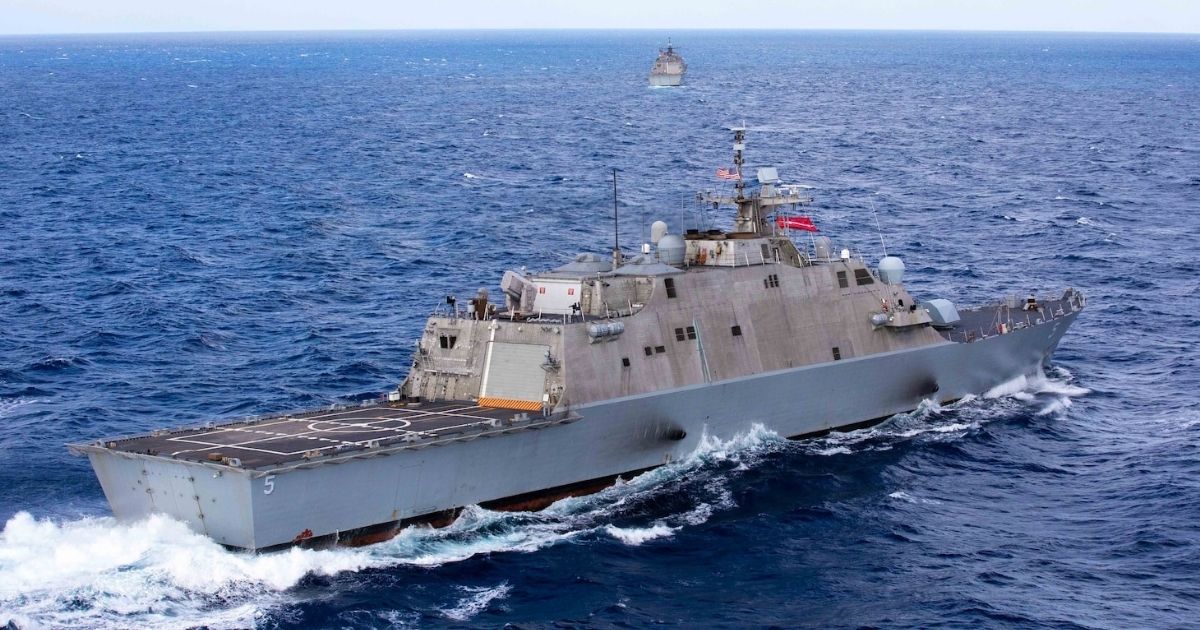 The following article, US Warship Stuck Overseas After COVID Spreads Through Fully Vaccinated Crew, was first published on Flag And Cross.

The littoral combat ship USS Milwaukee and its crew are stuck at Guantanamo Bay Naval Base in Cuba amid a coronavirus outbreak.

Navy leadership kept the ship in port after some sailors among the fully immunized crew tested positive for COVID-19, according to a Friday news release from the Navy. Infected crew members have been quarantined, kept away from the rest of the crew, the statement from the armed service said.

Some of those who tested positive have shown mild symptoms, according to the Navy. The exact variant causing the infection among crew members is yet to be identified.

“Centers for Disease Control and Prevention (CDC) guidelines are being followed, including contact tracing and testing protocols,” the news release said.

The ship is undergoing an “aggressive mitigation strategy” in compliance with guidelines issued by Navy leadership and the CDC, the Navy said.

As of Monday, the ship remained in Naval Station Guantanamo Bay, The Associated Press reported.

According to defense officials who spoke to the outlet anonymously, the number of sailors infected with the virus is remaining constant. The infected people make up around 25 percent of the more-than-100-member crew, according to the AP.

The Milwaukee left Jacksonville, Florida, its home port, on Dec. 14 for its deployment to the U.S. 4th Fleet area of operations. It was there to help the Southern Command stop narcotics trafficking operations in the Caribbean Sea and East Pacific Ocean, according to information from the Navy and the Defense Visual Information Distribution Service.

“This crew is excited to take the ship on its maiden deployment to 4th Fleet. They have put in many hours to ensure the ship is ready to deploy and conduct a wide array of missions,” Milwaukee commanding officer Commander Brian A. Forster said ahead of the ship’s departure from Florida, according to the DVIDS.

“This will be the first deployment for many of my crew members who are eager to see the world and accomplish missions they have been training for. To say the crew is excited is an understatement and I am honored to be their commanding officer,” Foster said.

The Milwaukee is the first Navy ship this year to pause its deployment because of a coronavirus outbreak on board, according to the AP. The ship was on a scheduled port visit to Guantanamo Bay when officials learned of the outbreak and had to sideline it in compliance with health protocols, according to the Navy.

As we celebrate the holidays, we must remain diligent to help stop the spread and #SinkCOVID

Sailors are encouraged to get their Covid-19 Booster shots.

“The U.S. officials said Monday that the Navy believes the total vaccination of the crew is the key factor in controlling the outbreak,” the AP report said.

The COVID-19 outbreak did not stop crew members from celebrating Christmas. Navy spokeswoman Cmdr. Kate Meadows told The New York Times on Saturday that the Milwaukee’s crew conducted an open-air service on the ship’s pier that day to commemorate the holiday.

“They are using the open space and fresh air for as many safe activities as they can,” she told the outlet, adding that the chefs onboard helped cook a special Christmas meal for the crew. The service followed social distancing and public health protocols, according to Meadows.

The first Navy warship COVID-19 outbreak the military experienced was in March 2020 aboard the aircraft carrier Theodore Roosevelt, the Times reported. That outbreak led to the ship being stranded in Guam for months. Around a dozen sailors onboard had COVID-19, and one of them died from it, according to the Times.

As many as 20,000 service members are facing discharge for refusing to take the COVID-19 vaccine after the Biden administration imposed a vaccine mandate for military personnel.

Cumulatively, as of Wednesday, the Department of Defense has seen 406,147 COVID-19 cases since the pandemic’s beginning. Of this number, 5,632 were hospitalized, 389,077 recovered and 632 died. The numbers include military personnel, civilians, contractors and their dependents.

According to data from the Pentagon, 332,263 service members had received one dose of the vaccine as of Wednesday. This figure is made up of 261,224 Army personnel, 7,093 Marine Corps personnel, 9,321 Navy personnel and 54,625 Air Force personnel.

Wuhan Red Death shots? What do you expect? Follow the money.