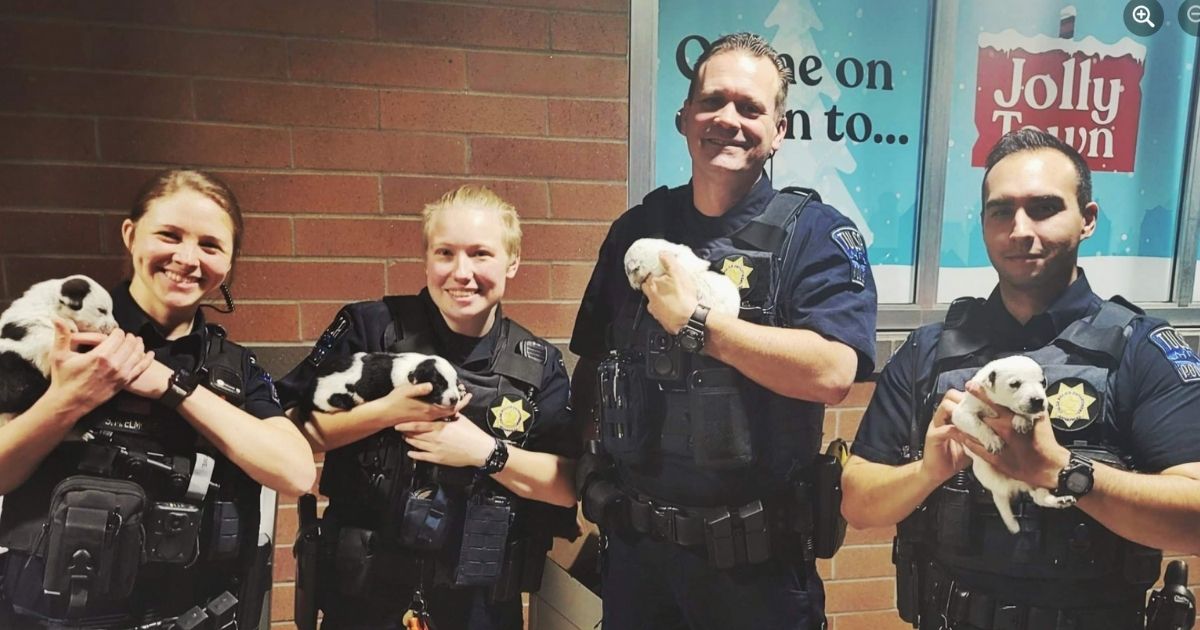 Not everyone gets Christmas day off of work — plenty of men and women still have very important jobs in lines of work that never take a break.

But for four officers in Tulsa, Oklahoma, working on Christmas night came with a few perks of its own — five, to be exact.

The situation didn’t start out positively. Police were called after a bag of puppies was left at a convenience store.

“Abandoned Christmas Puppies,” the Tulsa Police Department shared on Sunday. “Last night someone left 5 puppies in a zipped duffel bag on the counter at QT.”

“Mingo Valley Division — Edward Squad officers were made aware of the situation and responded to the scene.”

The puppies, who appear to be quite young and will likely need extra feeding care, couldn’t stay at the QuikTrip, but the Christmas spirit must have overtaken all four responding officers, as well as one of the employees on-site, as they quickly stepped up to claim the abandoned pups.

“Overwhelmed with Christmas feelings, 4 of the officers immediately adopted 4 of the puppies and the 5th went home with the QT employee,” the police department’s post continued.

“Big thanks to the cute pups, awesome officers and QT employee.”

The black-and-white puppies look like they might be part cattle dog, and many concerned people commented to thank the officers for their kindness.

“What a wonderful police department we have,” one person commented. “Thanks to the WT employee also. This is what the Christmas season is about. Salvation to all creatures.”

Someone, presumably a local, mentioned in the comments that they’d seen a surveillance video where a couple abandoned the mama dog, too.

“(I)t looked like they left the mama behind,” the person wrote. “I was looking on here to see if they picked her up too? In the video you see the couple dropping stuff off and the mama was wagging her tail running around with the lady and man and then the truck drives away and mama is left there.

“These people don’t deserve animals and I sure hope to read the mama was picked up too.”

No word from the police department on whether or not the pups’ mom was found, but at least the puppies are in good hands — and hopefully if their mom is out there somewhere, she finds a loving home, too.

Another commenter identified themselves as a trainer and kept up the trend of generosity by extending a special offer to the adopters.

“[T]hank you for your generosity,” they wrote. “As a professional dog trainer, I would like to gift each of these officers access to an online dog training program to help them on the path to owning dogs they are proud of, not embarrassed by.”

All in all, it was a heartwarming tale that came out of Tulsa on Christmas night.

The police department closed out their post with a word to prospective pet owners: “If you’re looking for a pet, please adopt don’t shop, there are lots of rescues and shelters that are over capacity for abandoned pets.”