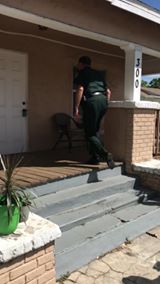 As Christmas approaches, delivery packages show up at many homes across the country. Be they Christmas presents, holiday purchases or regular purchases, they are all vulnerable to thieves — known as porch pirates — who snatch them from other people’s doorsteps.

To put an end to this kind of theft, cops in California, with the consent of homeowners, are placing fake delivery packages in front of homes to lure porch pirates.

These boxes, according to WTKR-TV, contain iPhones and general gifts along with GPS trackers to pinpoint the thief.

“We’re going to a prearranged residence with the homeowner’s consent. They are a prior victim of either mail theft or package theft. We place the package at the front door, and we wait for the signal to go off,” Anaheim Police Officer Andrei Bratiloveanu told WTKR-TV.

When someone moves the package from its original position, dispatch receives an alert and “they’re able to relay to officers at what speed and which direction the package is going in,” Bratiloveanu explained.

A video shared by KCBS-TV on YouTube shows how police use this method to catch package thieves.

In the video, officers riding in a black van drop a FedEx package in front of the door of a home near police headquarters, robbed twice by porch thieves.

After leaving the package at the porch, cops wait for an unsuspecting porch thief to steal it.

Once someone gets their hands on the package, dispatch gets a notification and police officers receive alerts through text messages indicating that the box they left on the porch has been stolen.

The video then cuts to a previous instance where cops successfully nabbed a porch pirate. A man wearing a blue jacket and black knapsack, as seen in the clip, comes and takes the GPS-tracker-equipped package.

Cops then, according to the video, arrested the man when he was opening the package in a park nearby.

Police officers have been using this method to catch porch pirates during the holidays, but they expect to start doing it all year, according to WTKR-TV.

According to a survey conducted by Safewise, in collaboration with Cove Home Security, around 210 million packages went missing from porches nationwide this year.

The theft, survey results showed, occurs even to Americans who have installed security equipment in their houses.