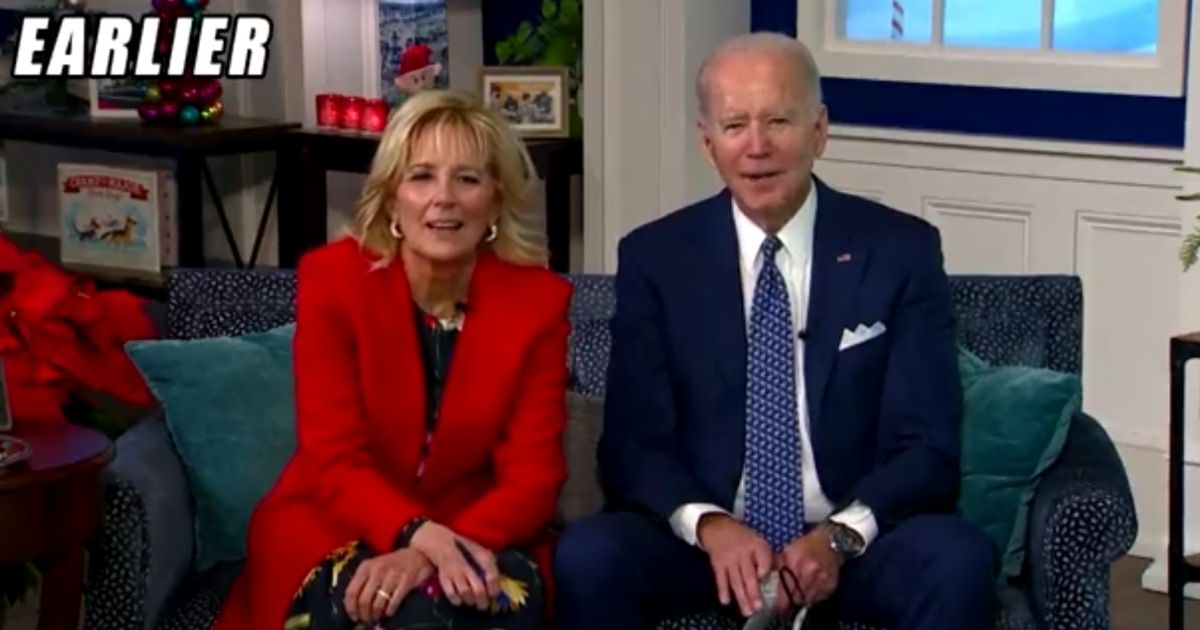 The following article, Dad Pulls Epic Prank on Joe Biden, But Now He Says He’s Being Flooded with Threats, was first published on Flag And Cross.

The MAGAverse was delighted on Christmas Eve when a sly Oregon father managed to sneak a subtle “Let’s go Brandon” in at the end of a call with President Joe Biden, who had called into Norad’s Santa Tracker for a livestream event.

“Let’s go Brandon,” of course, has become a popular refrain of Biden critics who prefer the less vulgar alternative it offers to “F*** Joe Biden” as well as the commentary on media coverage of the Biden administration, as it began after a reporter said on air that the crowd was shouting “Let’s go Brandon” to celebrate NASCAR driver Brandon Brown’s successful run rather than expressing their distaste for our current president.

The father, whose children each spoke to POTUS and first lady Jill Biden to tell them what they’d like for Christmas, warmly wished the first couple a merry Christmas before adding “Let’s go Brandon” at the end of the call.

BREAKING: Joe Biden was taking calls from the NORAD Santa tracking program and a dad ended the call with “Merry Christmas, and Let’s Go Brandon.”

You’ve got to hand it to Biden, he did not let the moment phase him in the slightest. Of course, this could be due to the fact that he didn’t have the slightest idea he’d just been had, to be fair.

However, his apparently incredibly diehard fans didn’t take it so gently.

Despite the fact that “F*** Trump” had no clean alternative for the four years during which President Donald Trump was in office and that celebrities freely discussed assassinating him with little to no recourse, the tongue-in-cheek PG version of “F*** Joe Biden” might actually be putting this cheeky father’s life at risk.

That’s right — he says he’s been receiving threats all for making the joke on air, which he says wasn’t rooted in ill will at all, but simply frustration and a healthy regard for the First Amendment.

“At the end of the day, I have nothing against Mr. Biden, but I am frustrated because I think he can be doing a better job,” Jared Schmeck, the former police officer and father of four, told The Oregonian on Christmas Day.

“I mean no disrespect to him,” he said.

The 35-year-old says that he is not a “Trumper,” but simply a “free-thinking American and follower of Jesus Christ.”

“And now I am being attacked for utilizing my freedom of speech,” he told the paper, explaining that he’s been receiving “vague but threatening” calls, as the outlet described them.

“I understand there is a vulgar meaning to ‘Lets go Brandon,’ but I’m not that simple minded, no matter how I feel about him,” he said. “He seems likes he’s a cordial guy. There’s no animosity or anything like that. It was merely just an innocent jest to also express my God-given right to express my frustrations in a joking manner … I love him just like I love any other brother or sister.”

He added that regardless of the backlash, he “stood 100% behind what I did and what I said.”

As well he should.

I don’t need to explain that the insult is certainly less-than-polite, as Schmeck himself seems to realize this.

His “Let’s go Brandon” moment on Biden’s livestream rather epitomizes the “Let’s go Brandon” spirit as a whole — it’s a clean-ish way to express frustration toward a president that, in many ways, is rather difficult to insult because the media is so determined to cover for him, one way or another.

Just as the reporter who told the cameras that the crowd was chanting “Let’s go Brandon” when they were very much not chanting “Let’s go Brandon,” the establishment supporters of Biden’s presidency routinely gaslight Americans, as the administration does itself, by telling us that we’re just anti-science, white supremacist, domestic terrorist supporters of a despotic madman who almost overthrew our democracy if we don’t support Joe Biden and everything he stands for.

Case in point: Schmeck is allegedly receiving threats for a light-hearted gag roasting the president in front of the whole world. Seriously?

And they wonder why “Let’s go Brandon” has become so popular … this is exactly why.

Biden’s America is beyond backward, and the people who support him are getting crazier and more rabid by the day.