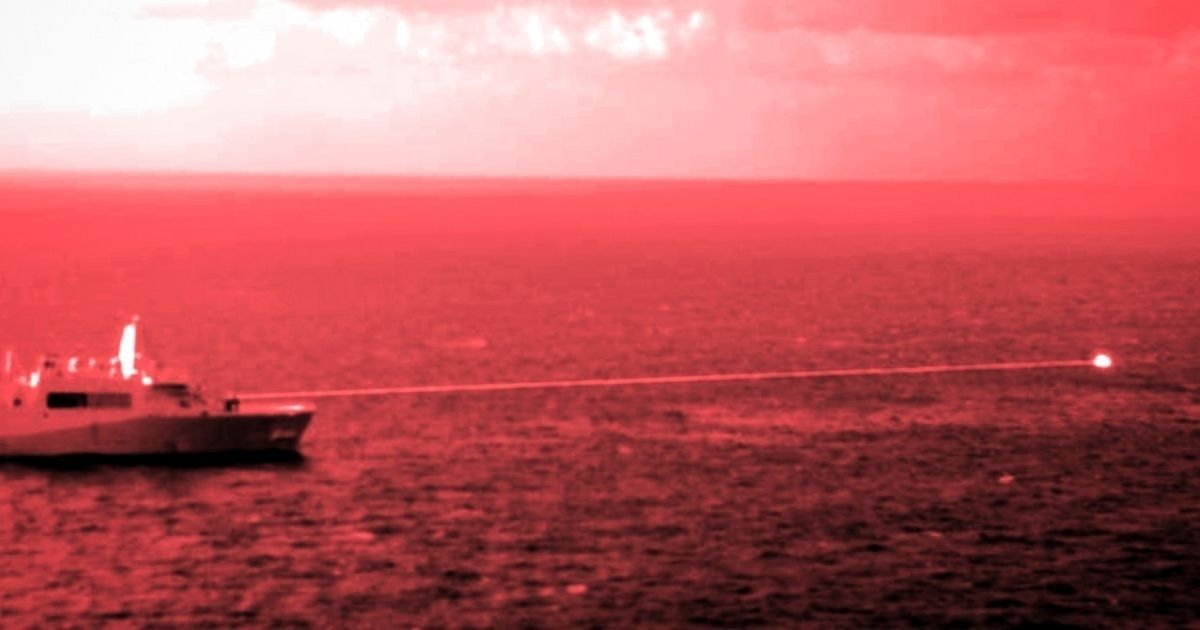 The following article, Sea Glows Red as Navy Fires Laser Weapon in the Middle East, was first published on Flag And Cross.

The Navy tested a high-energy laser weapon system Tuesday in the Gulf of Aden near Yemen.

Photos released by Naval Forces Central Command showed the sea glowing red as if it were filled with blood while the laser weapon took out a static surface training target.

The test wasn’t the Portland’s first. The ship used the LWSD in a May 2020 Pacific Ocean demonstration in which it disabled a drone.

Laser weapons once used to be the stuff of science fiction films and novels.

However, with rapid scientific progress in the last few decades, several countries — including Israel, Russia and China — have developed or are seeking to develop their own laser weapons to combat the threats of the 21st century.

The South China Morning Post reported in 2018 that China had developed a 15mm-caliber portable laser rifle with a range of half a mile, the ZKZM-500.

It said the laser assault rifle could produce an invisible beam that could penetrate windows and result in “instant carbonization” of the target’s skin and tissues.

In 2020, the Navy said China’s People’s Liberation Army had attacked a U.S. P-8 surveillance aircraft with a high-grade laser weapon, leading to a formal protest from the United States, CNN reported.

The United States has long been testing, developing and looking for ways to implement laser weapons in its arsenal.

The company is working on different laser-based technologies to improve the nation’s defense infrastructure.

One such technology is the High Energy Laser with Integrated Optical-dazzler and Surveillance system for naval warfare.

HELIOS, according to an infographic from the defense contractor, will have a 60-plus-kilowatt high-energy laser for inshore attack crafts, along with long-range surveillance capabilities.

It also will have an unmanned-aircraft-system dazzler — a laser weapon capable of temporarily disabling a target.

The weapon would come in handy in a great power conflict and in securing the seas from threats such as Iran-backed militias or Iranian naval aggression in the Persian Gulf.

With the rise of China, having an edge in laser weapons would prove beneficial, if not crucial, for the United States to defend its allies in the South China Sea.

and Biden and the Dems can’t wait to use it……on We The People ?

Sleepy Joe should never be told of any developments of our military for a few years after he is no longer tthe POTUS.