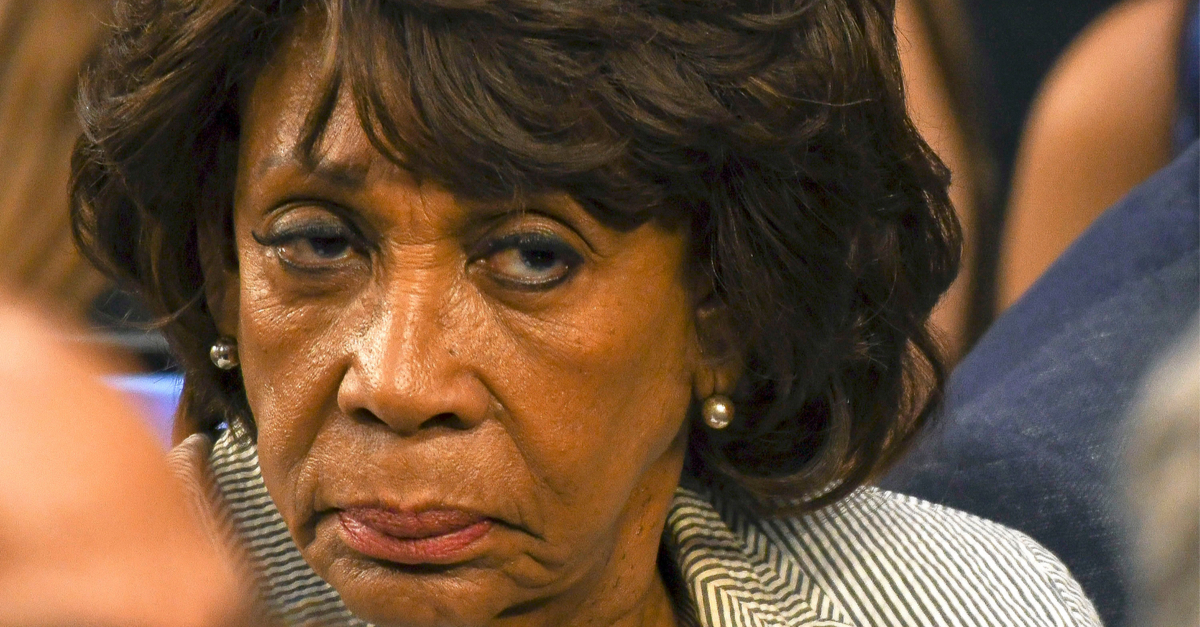 The California congresswoman — a vocal proponent of mask mandates — was caught not wearing her mask on a cross-country United Airlines flight from Virginia to Los Angeles last week.

The passenger who snapped the damning photo told the Daily Wire she was outraged that flight attendants repeatedly hounded her and other passengers to keep their masks on while ignoring Waters’ blatant violation of the Federal Aviation Administration’s mask mandate.

Another Do As I Say, Not As I Do Democrat! Aka Hypocrite.

“Maxine had her mask off for at least an hour while she read her paper and took a nap,” the source told the Daily Wire. “Attendants brought her fresh coffee while she was napping and didn’t say a thing as three of them walked past and saw Maxine reading and then sleeping while she remained maskless.”

In contrast, the source said, flight attendants repeatedly nagged her and other passengers to wear their masks properly — even while eating.

“Flight attendants stay on you,” the woman said. “If you don’t put your mask on in between bites of food or sips of drink, they will ask you to, they state so at the start of their safety guidelines before the flight.”

The passenger said the airline crew scolded her to keep her mask on even though she had suffered a nose bleed.

“My nose had bled pretty early into the flight, so I later on pulled my mask down below my nose to get some cooler air,” she said. “Within a few minutes, a flight attendant informed me I had to put my mask back on over my nose, the right way, immediately.”

When the woman pointed to Waters, who was blithely maskless, the flight attendant replied, “Okay, but you need to put your mask on the right way.”

The tipster said the airline employee reminded Waters once to put her mask on — but only after she pointed out their disparate enforcement of the rules.

“I put the mask on ‘the right way’ after the flight attendant told Maxine to put her mask on,” the source told the Daily Wire. “Maxine had been napping. She did put the mask on after the attendant interrupted her sleep and told her to do so. I think she was startled by the rude awakening.”

The source was disgusted with United Airlines‘ dismal customer service and special treatment of Waters, a public servant who should follow the same rules she imposes on others.

The passenger said “being roughly spoken to for having my own mask down a fraction of an inch when someone else, a well-known politician, just six feet away from me, was ‘breaking’ the required face masks on airlines was flabbergasting.”

Keep in mind that at 83 years old, the California congresswoman is at the highest risk of dying from COVID-19. Based on the nonstop fearmongering of Democrats and their media lapdogs, you’d think Waters would eagerly follow every precaution to ensure she doesn’t get infected.

“But none of them once bothered Maxine when she was maskless,” the tipster told the Daily Wire. “A politician who believes in masks, but only when others wear them for her. It’s a double standard, but people seem to be blind to it.”

Reminder: In May 2020, Waters berated former President Donald Trump, claiming he did not wear a mask in public.

Trump is a dangerous example for children and those who tend to follow him. Not wearing a mask and not social distancing is dangerous. Do not follow his example. Protect yourself. Coronavirus kills! Maybe this ignoramus doesn’t care, but you should care about yourself!

In June 2020, Waters blamed Trump supporters for the pandemic when she claimed — without evidence — that they don’t wear masks or socially distance.

Trump still refuses to wear a mask. Trump’s FAILED leadership & his unfortunate followers not wearing masks & not social distancing is responsible for the growing infections, death, & surge in #coronavirus cases.

For the record, many Trump supporters wear masks, social-distance and are even vaccinated against COVID.

Just because they protest Big Government overreach does not mean they’re anti-mask or anti-vaccine.

Waters joins a long list of hypocritical Democrats who scold Americans to comply with draconian, unscientific coronavirus restrictions while ignoring the rules themselves.

House Speaker Nancy Pelosi visited a San Francisco hair salon on Monday afternoon for a wash and blow-out, despite local ordinances keeping salons closed amid the coronavirus pandemic according to FOX News.

She wasn’t wearing a mask. pic.twitter.com/WFZAS8Bc1H

Newsom would like you to forget about his dinner at French Laundry during his lockdown. https://t.co/o8ukXbd9Ry pic.twitter.com/xeeRhLtEZd

Let’s be clear: I wish them well & hope they have a speedy recovery.

Maskless Biden coughs into his hand and then goes around shaking other people’s hands.pic.twitter.com/hLRlPbaWRp

At this point, the pandemic is still raging as the nation crumbles under the weight of terrifying crime waves, daily border invasions and soaring inflation.

If you think things are bad now, just wait until 2022. Things can — and probably will — get worse, especially as the country approaches the midterm elections.