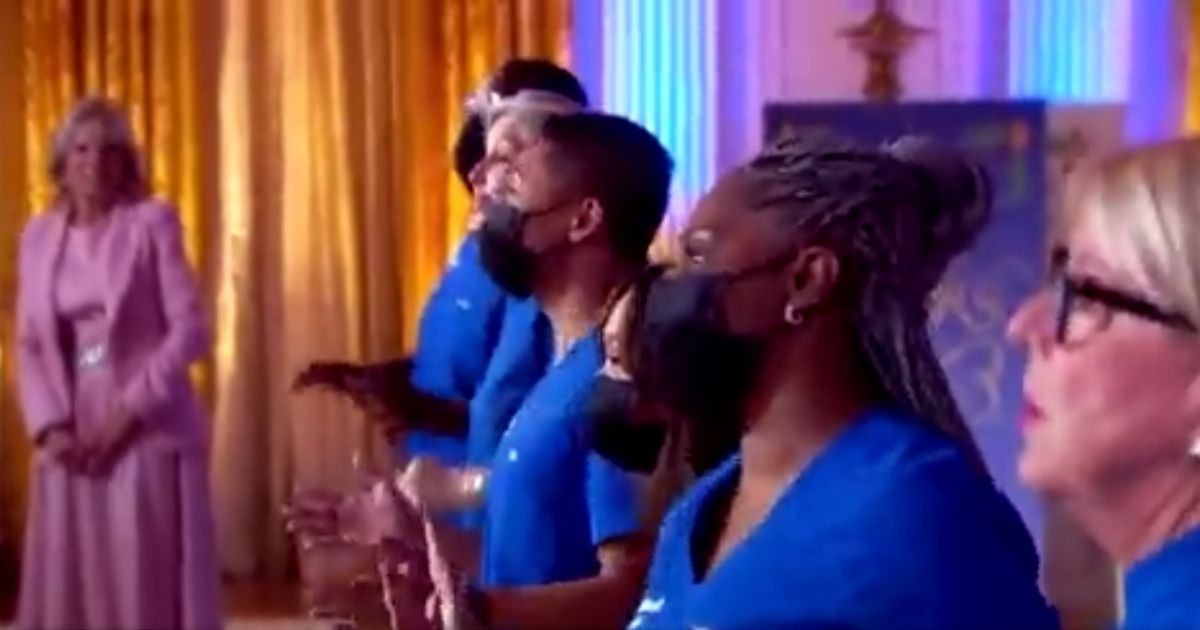 The following article, Here’s the Dark Story Behind Biden’s Dancing Nurses and Where They’re From, was first published on Flag And Cross.

If you’ve popped onto social media this Christmastime, you’ve probably noticed a widely-shared video of some very cheerful nurses singing at a White House Christmas celebration in a video that is bound to be either tremendously heartwarming or cringeworthy, depending on the viewer.

The performance, which had been viewed over 6.8 million times as of midday Christmas Eve, was given by the Northwell Health Nurse Choir from Long Island, New York, and was part of the “Spirit of the Season” public television special which was filmed at the White House.

Newsweek reported that the 17-member group of nurses first rose to fame while competing on “America’s Got Talent” this year, where they got a spot on the show’s finale.

On Tuesday, they performed “We Need A Little Christmas” from the Broadway musical “Mame” for a delighted First Lady Dr. Jill Biden and millions of social media viewers, many of whom wrote sincere messages of praise for the choir.

However, there is a rather unsettling backstory to these delightful musical nurses.

As they bask in the limelight and enjoy celebrity status, over 1,000 of their coworkers will be celebrating the holiday with no job and, in many cases, an uncertain future ahead of them.

This is because their former coworkers at Northwell Health who refused to get the vaccine were fired earlier this year. These singing nurses are among those who complied to keep their jobs.

These are employees of Northwell Health, which just fired 1,400 unvaxxed healthcare workers due to the Biden Admin’s OSHA rule. https://t.co/PdoLsBz5Y0

In October, Northwell Health, which is New York State’s largest health care provider, fired 1,400 employees over their refusal to comply with the state’s strict vaccine mandate for employees of health care facilities, as The New York Times reported at the time.

Earlier this month, the Supreme Court allowed Governor Kathy Hochul’s mandate, which does not include religious exemptions or regular COVID-19 testing as an alternative, to stay in place, so thousands of workers across the state are likely facing unemployment or have already been fired.

This is in spite of staffing shortages in hospitals so pronounced that Hochul declared a state of emergency in September which would allow her to bring in National Guard assistance to hospitals still grappling with the pandemic.

Other states are facing health care staffing shortages as well, as omicron spreads and public health officials issue dire warnings, so others on Twitter also took a cynical view of the singing nurses in light of the Biden administration’s heavy-handed approach to pandemic vaccine mandates and public health advisories.

Nothing says “DEADLY PANDEMIC – HOSPITALS OVERWHELMED, LOCK IT ALL DOWN!” quite like the cringe nurse choir taking time to learn a song and dance and perform at the White House for their regime masters.

Straight out of North Korea pic.twitter.com/raG7r4Pl1v

We have been constantly fed a narrative throughout the pandemic that health care workers are heroes. Indeed, they sincerely deserve our appreciation and consideration for the role they play in our current public health crisis.

Yet the moment that thousands of them began to resist being required to take the COVID-19 vaccine to remain on the job, suddenly these nurses, doctors and other health care professionals were told they weren’t so vital to the workforce anymore. This was in spite of the fact that they’d passionately performed through over a year of pandemic crisis and many had already contracted and recovered from the virus.

There could easily be at least tens of thousands of health care workers across the country now facing or coping with unemployment over their refusal to comply with private or federal mandates. At the same time, hospitals around the country are facing staffing shortages that you’d think would make every worker critical as the media and public health officials sound the alarm about the rise of the omicron variant.

So why do the nurses from the Northwell Health choir have time to do cheesy televised Christmas specials from the White House?

If the virus is so very serious and deadly that it is critical for health care workers to sacrifice their personal consciences or set aside their objections to the COVID-19 vaccine, so dire that the White House is warning the unvaccinated that we are in for a “winter of severe illness and death” and will soon be overwhelming the hospitals, why was the White House so disinterested in even public continuity behind their masking regulations that neither First Lady Dr. Jill Biden nor all of the singers bothered to be masked?

This performance was heartwarming to many because, in the pandemic, it does pull at the heartstrings to see nurses singing joyfully in the midst of an otherwise dark time for their vocation and country.

This isn’t about admiring health care workers, since those who won’t get vaccinated are still irrefutably heroes for working without a vaccine last year.

This is blatant propaganda for Biden’s two-tiered American society. Get the jab, comply and we can all get along. Peace, love and lots of Biden “unity” for anyone whose willing to keep their head down and play ball.

But if you refuse? You’re out of a job, ostracized from society, called a zealot and a heretic for raising honest questions about constitutionality and medical autonomy and threatened with a “winter of severe illness and death.”

This holiday season, never forget that these dark tactics and twisted threats are no match to the burning light of freedom that shines in the heart of everyone who refuses to compromise what is right for what is convenient or comfortable.

As the light of Christ shines through the celebration of his birth, so may he also bless and be with those who have risked it all to stand up for what they believe in in these terrifyingly divisive times.

Continue reading: Here’s the Dark Story Behind Biden’s Dancing Nurses and Where They’re From ...