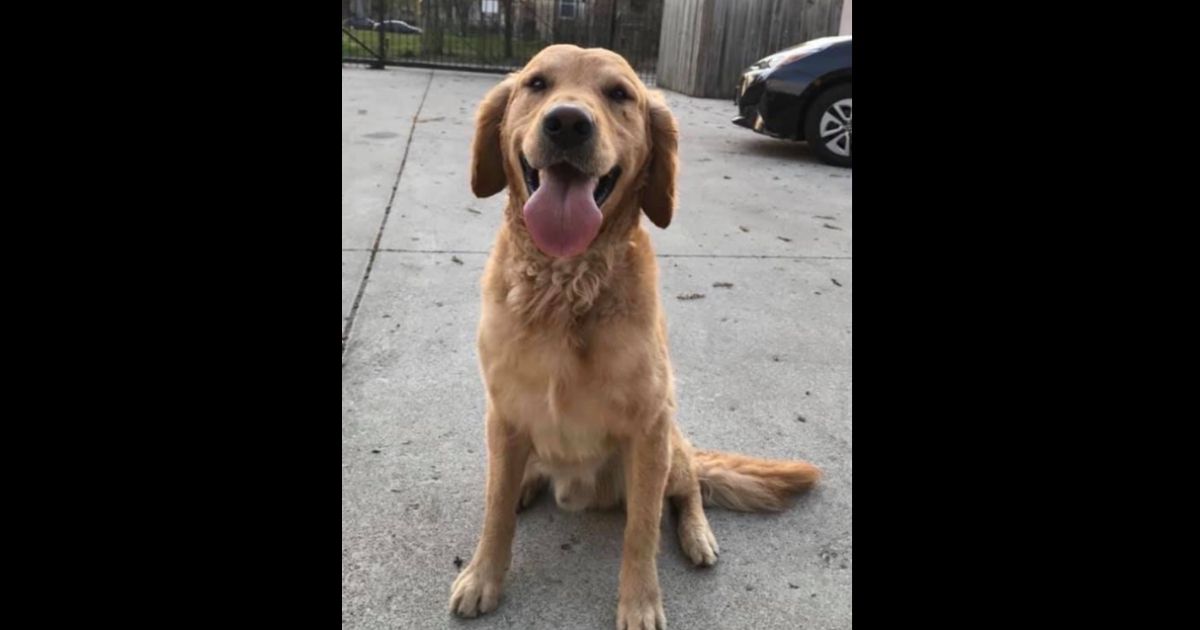 The following article, Woman Sues Animal Control After Dog She Says Had ID Is Rehomed, New Family Refuses to Return Him, was first published on Flag And Cross.

Many people fear what could happen to their dog if it got out into the wide world on its own. All manner of terrible ends are possible, and many families never get closure on their missing furry friends.

But few people have to deal with what 20-year-old Karly Moran-West of Chicago has been going through for over a year. Her golden retriever was lost in January 2020 — and she found him, but she can’t have him back.

Moran-West picked Zeus out when he was a puppy, and the two developed a close bond over the six years they were together.

“Zeus, he was very outgoing — he came straight up to me,” she told WBBM-TV. “He was playing with us, and I was like, that is the one I want. He acts exactly like me.”

Last January, while Moran-West was on a trip, Zeus stayed with her dad — but the dog managed to get out of the yard and eventually found his way to the Chicago Animal Care and Control.

According to WGN-TV, it was a few weeks before Moran-West learned that Zeus had escaped — but she did everything she could from that point on to recover him.

“I immediately made posters, I posted them all around the neighborhood, I would go consistently, almost every day I would call his name,” she told WGN-TV. “Finally somebody sent me a picture of Zeus with a family and I was like, ‘that’s Zeus right there.'”

Apparently, within the few weeks that he’d been missing, the dog had gone from CACC to the rescue Fetching Tails Foundation, where he was adopted out to a family who has no interest in returning him to Moran-West.

But there were curious inconsistencies. Zeus had been wearing a custom-made collar Moran-West had made just for him: It was bright red and embroidered with his name and her phone number.

CACC intake documents listed the golden retriever’s name as Zeus and stated the dog was “wearing a red collar with the name ‘Zeus,'” according to WBBM-TV.

The problem is that Moran-West claims she was never contacted. She said she’s gone through her phone’s history and there’s no record of any attempt to reach out to her.

“I have tried several times to reach out to FTF with no cooperation,” she posted on Facebook in April 2020. “All I want is my Zeus back.

“I’m sure the family are nice people, they adopted my fur baby after all. Suspiciously, Zeus still has his name with his new family. FTF had posted photos with his name (some they have since removed) & they stated that He was wearing a custom red collar when he was found. This collar had his name and my phone number stitched into the collar. No one from CACC, where he was at, at first before being transferred to FTF, or anybody from FTF called me, I have even checked my phone records thoroughly to make sure.”

She’s cried. She’s been depressed. She misses her dog — and she’s not giving up. Now, armed with an attorney, Moran-West is going after the Department of Animal Care and Control and suing them.

“I’m still blown away by the fact that there’s a dog with a collar, with a phone number — and nobody saw fit to call,” Moran-West’s attorney, Jonathan Rosen, said. “She was lied to and told there was no phone number.”

“We were told by Fetching Tails Foundation that they did reach out to the family and the family said no,” Rosen added of their request to have the dog turned back over to Moran-West.

To the family who still has her dog, Moran-West has a clear message: “You guys should have a heart and give me back my dog.”

Continue reading: Woman Sues Animal Control After Dog She Says Had ID Is Rehomed, New Family Refuses to Return Him ...