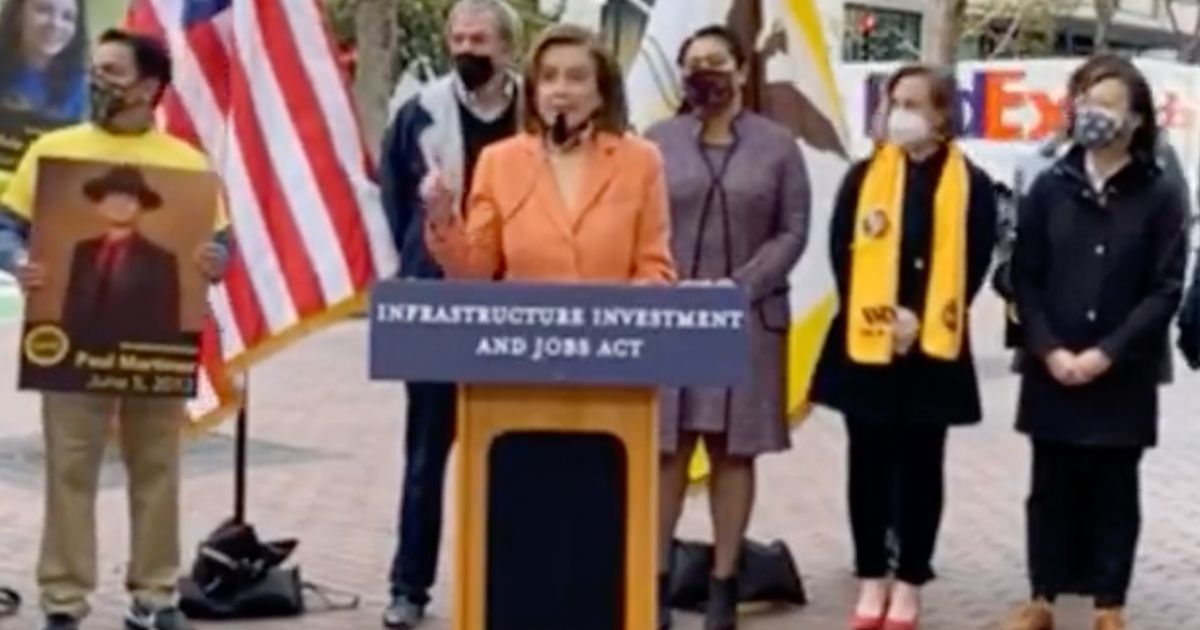 Career Congresswoman Nancy Pelosi is a mainstay of California politics and, as the Democratic Speaker of the House, represents the epitome of the leftist swamp establishment, so she probably never expected to be confronted with the brutal reality of what the rest of America thinks about the Biden era status quo while giving some nice, friendly comments about fellow Dems on her home turf.

After all, downtown San Francisco isn’t exactly the first place you’d expect to hear chants of “Let’s Go Brandon,” but a hearty, echoing “Let’s Go Brandon” is exactly what threw Pelosi off her game as she made some remarks at a press conference for the city’s Democratic Mayor London Breed and other leaders on Monday.

A video posted to Twitter captured the incredibly awkward — and let’s be real, totally hilarious — moment that a boisterous dissident shouted the popular anti-Biden phrase, throwing Madame Speaker entirely off her game.

While Pelosi did not acknowledge the heckler, she was clearly distracted by his shouting, which continued with a loud “whooo!!” and “USA! USA!” chant as the speaker fumbled to pass the podium off to fellow California Congressman Mark DeSaulnier.

The New York Post noted that this incident came just one day after Democratic Senator Joe Manchin of West Virginia announced he would not be voting on President Joe Biden’s Build Back Better economic package, throwing a wrench in the gears of Pelosi and the Democrat’s starry-eyed dreams of plunging our nation into the dark abyss of economic devastation and radical social upheaval.

So, it was a rough time to catch the Speaker unawares.

Now, as someone who grew up in San Francisco, I have to say I’m a bit tickled by the whole scene.

On the one hand, as an ex-liberal who has been observing the city’s descent into a dystopia of failing and tyrannical progressive policies from the comfort and safety of Middle America, it gives me hope to know there’s at least one “Let’s Go Brandon” patriot in the city who is willing to, um, vocalize that the proverbial emperor has no clothes, so to speak.

Do you think Americans are becoming tired of Democrats and their policies?
Yes: 0% (0 Votes)
No: 0% (0 Votes)

His shouts seem to crack through the façade that the Democrats try to keep up that, with their leadership, moderate Americans have had the calm, mature, return to normalcy they’ve all been so desperately craving as everything quietly smolders in the background behind their fancy podiums and bald-faced lies.

The Biden agenda is crumbling in D.C. As prices skyrocket, inflation is rising, and crime rates continue to climb.

Can you imagine what this heckler is paying for gas or for groceries or what it’s like to walk home from the underground at night worrying about getting mugged?

Or what he sees when he looks at the headlines claiming the Biden administration is threatening Americans who won’t get vaccinated, pretending his son Hunter Biden’s suspicious art career isn’t corrupt at all and gaslighting the country about how bad the supply chain crisis is?

What about how he feels to be subject to absurd masking and vaccine requirements when Biden promised he’d “shut down the virus” and has done exactly nothing of the sort?

Meanwhile, just last week, Pelosi herself feigned ignorance as to where all the lawlessness comes from — as her own district has effectively decriminalized theft below $950 and large-scale, coordinated smash-and-grab looting sprees have become commonplace in the city’s high-end retailers.

This is happening as homelessness and drug addiction have become so marked in the city that there’s an app just to track human poop sightings.

So it might seem surprising that Pelosi would inspire heckling in her own hometown — but is it really, for the people who are closest to the terrible results of her party’s terrible leadership?

Not so much. What’s more, I think this kind of scene might start happening more and more as this dumpster fire continues to rage.