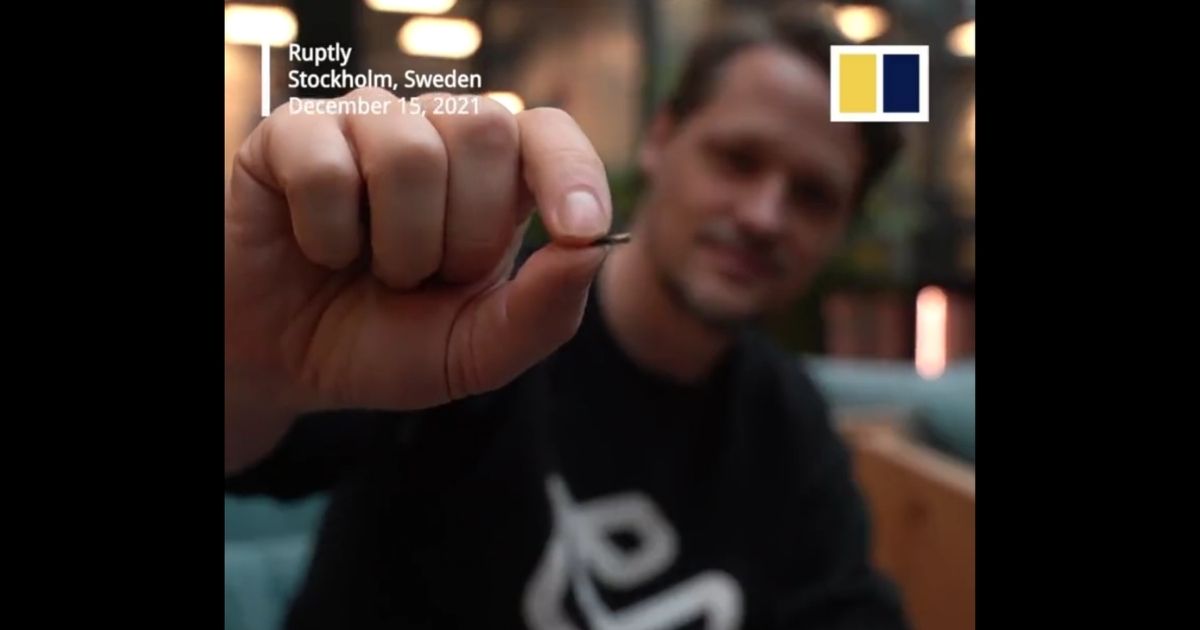 The following article, Sign of the Times: Company Debuts Vaccine Passport That Can Be Implanted Inside Your Body – Video, was first published on Flag And Cross.

A video posted last week showing how a microchip can be implanted containing a person’s COVID-19 vaccine status is causing speculation whether it is a precursor to the “mark of the beast” written about in the Bible’s book of Revelation.

The Apostle John wrote prophetically that an evil beast would arise during the end times who would deceive many and seize control of much of the earth.

This beast will cause “both small and great, both rich and poor, both free and slave, to be marked on the right hand or the forehead, so that no one can buy or sell unless he has the mark, that is, the name of the beast or the number of its name,” the Christian leader explained.

The Stockholm, Sweden-based startup Epicenter demonstrated how such a world could become a reality through microchip technology.

In the viral video posted by South China Morning News, a woman is shown using the implanted chip to gain access to the Epicenter office by placing her arm just above the hand next to a digital reader.

“Implants are a technology are a very versatile technology that can be used for many different things and right now it’s very convenient to have a COVID passport always accessible on your implant,” chief disruption officer Hannes Sjoblad said.

Beep boop beep: Your vaccination record has been verified

Of course, we’re in the midst of a political battle in the U.S. over vaccine mandates, with cities like New York and Los Angeles requiring people to show proof of vaccination to participate in indoor activities like dining, physical fitness, entertainment or sporting events.

It’s not a huge intellectual leap to see how such mandates could go broader like showing one’s vaccine status to be able to go grocery shopping or even have a bank account, if total conformity were enforced.

“Eventually, this technology will become standardized allowing you to use this as your passport, public transit, all purchasing opportunities, etc.,” Todd Westby, 32M CEO said in a company news release at the time.

One could see how the idea of having a positive vaccine status uploaded on your chip in order to be able to buy and sell could be considered reminiscent of the biblical prophecy.

However, Christian leaders point out that taking the “mark of the beast” is not something people will do by accident, such as under the guise of complying with a COVID vaccine mandate.

“The Bible speaks of someone identified as the ‘Antichrist’ and he will require people have a ‘mark’ that people will receive to buy and sell,” California-based Harvest Christian Fellowship Pastor Greg Laurie told USA Today in a September email. “The COVID-19 vaccine — or any vaccines — have nothing to do with any of this.”

Laurie, who has been vaccinated, explained that the mark will be a pledge of loyalty to the Antichrist that no one would take it unknowingly.

“In Revelation 14, we learn that those who take the mark are doomed,” he said. “God will not doom people for taking something unwittingly.”

Jerry Newcombe from D. James Kennedy Ministries offered a similar observation in a 2017 opinion piece for The Christian Post.

“Many biblical scholars note that Revelation is not pointing to some inadvertently-adopted technology,” he wrote, but is speaking of “those who cast their lot with the opponents of Christ.”

Michael Maiden, the lead pastor of Church of the Nations in Phoenix, addressed the topic in a sermon about the end times in October, recalling someone asking him if the vaccine could be the “mark of the beast.”

“I don’t think it is,” he said. “I feel like all of this is a trial run, that things are going to escalate, but now people in power see how they can obtain more power.”

Is the book of Revelation coming true before our eyes? Parts of it, of course — that’s probably been happening for nigh on 2,000 years.

But probably not this part. Not yet, anyway.

Continue reading: Sign of the Times: Company Debuts Vaccine Passport That Can Be Implanted Inside Your Body – Video ...