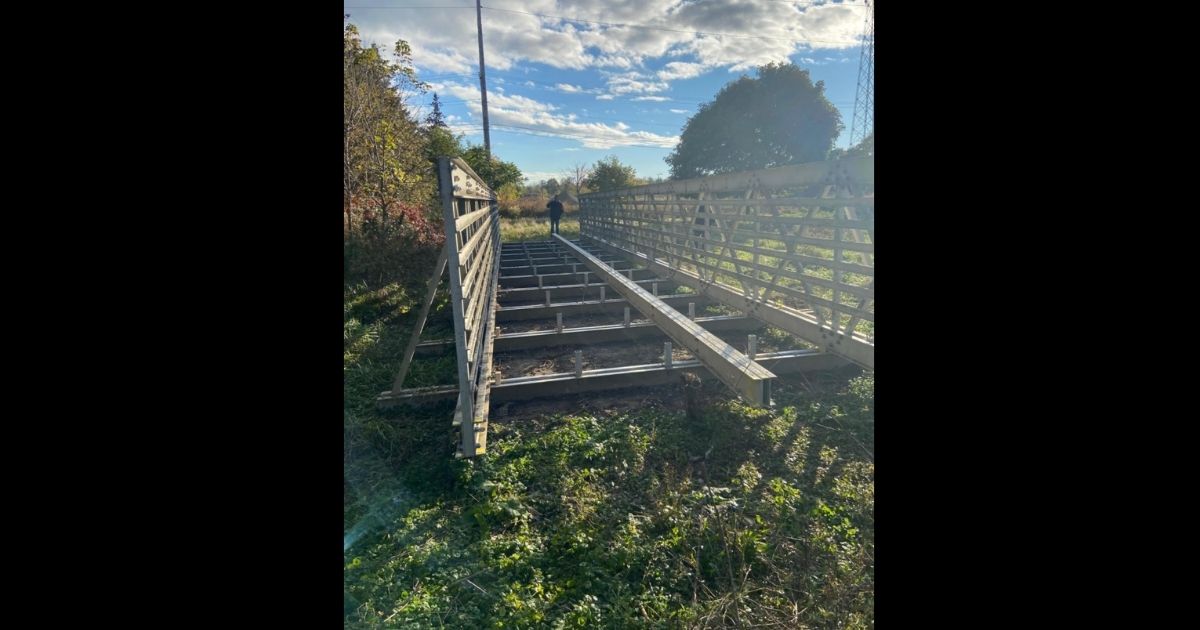 The following article, Shock Waves Sent Through Town After Entire Bridge Gets Stolen in Ohio, was first published on Flag And Cross.

It seems impossible that a bridge could just up and vanish, but that is what happened to a rather large bridge from Middlebury Run Park in Akron, Ohio.

Police first posted about the missing bridge on Dec. 10, stating that the bridge had been originally removed and stored nearby while wetland restoration was going on at the park.

On Nov. 3, authorities noted that the deck boards had been removed and brush growing around it had been cleared. By Nov. 11, the whole bridge — which was 58 feet long, 10 feet wide and six feet high — was gone.

Police asked for help tracking down the culprit. They got a lot of comments on the original post, many of them tongue-in-cheek or less-than-helpful.

“The price of wood… I’m not surprised,” one person wrote.

“What house in the area has a ‘new’ old deck?!” another wrote.

Some people questioned whether the structure could have been considered abandoned, as it was placed in a field and appeared to have been discarded. One person even offered an updated definition of “storage:”

“stor·age | ˈstȯr-ij (noun): the retention of materials by leaving them in a field behind a warehouse,” they wrote.

Others pointed out that such a large structure would require the use or rental of heavy equipment to transport. Police followed up on that and were able to track the missing property to 63-year-old David Bramley, who had apparently spotted the unused bridge, rented a crane and transported the structure to his property in Medina County.

“Friday afternoon, around 2:45 p.m., a team of police officers converged on a property in Medina County and conducted a search warrant,” the Akron Police Department shared on Facebook. “During a search of the property, the bridge was found partially disassembled.

“Bramley was arrested and charged with Felony Theft.

“Members of the Akron Police Department work tirelessly every day, to foster and strengthen relationships, while enhancing public trust throughout the community. Utilizing the spirit of those partnerships, detectives, along with law enforcement personnel from neighboring jurisdictions, were able to help locate the stolen bridge and bring this investigation to a close.

“Arrangements are being made to ship the bridge back to Akron in the coming days.”

It’s unclear what exactly possessed Bramley to (allegedly) carry through with such an undertaking. Was it need? Greed? Hubris? A big misunderstanding? We may never know.