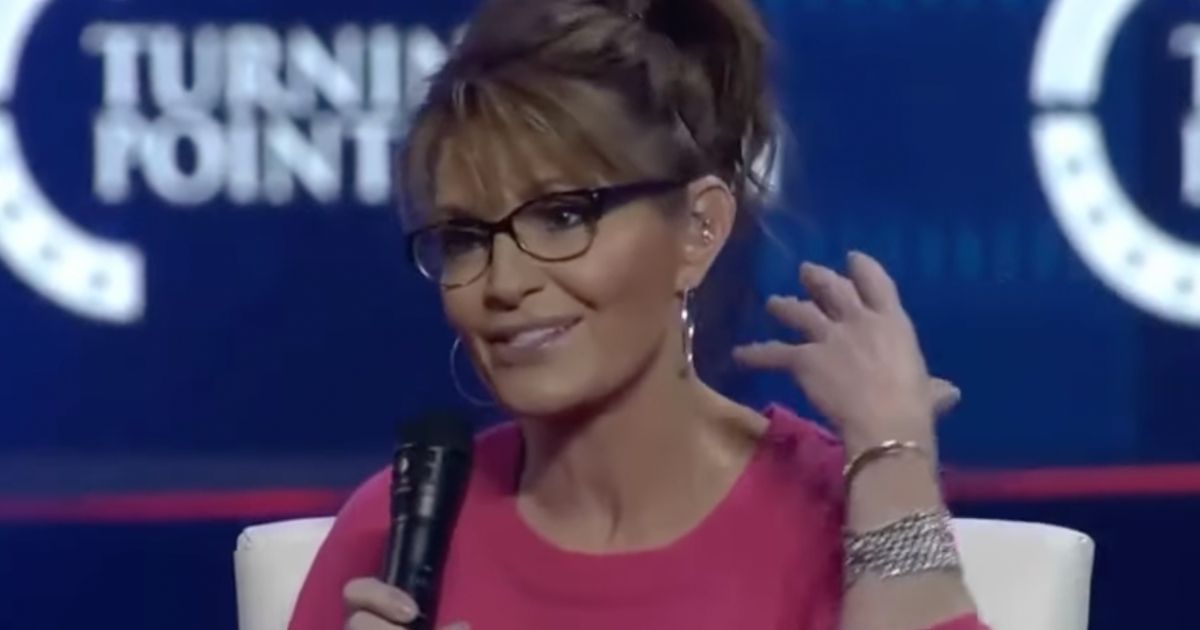 The following article, Sarah Palin Rails Against COVID Vax: ‘It Will Be Over My Dead Body That I’ll Have to Get a Shot’, was first published on Flag And Cross.

Former Alaska Gov. Sarah Palin said on Sunday it would be over her “dead body” that she receives the COVID-19 vaccine.

The 2008 Republican vice presidential nominee told Turning Point USA executive director Charlie Kirk at a conference the group hosted in Phoenix that she has already recovered from the virus and therefore has natural immunity.

“Do you remember [Dr. Anthony Fauci] said that if you had COVID, this was months and months ago, you would be naturally immune,” recounted Palin, who was diagnosed with the sickness in late March.

“So at the time, we were led to believe we wouldn’t need to have the shot. Well, then they changed their tune, and now those of us who have had COVID, they’re telling us that even though we’ve had it — we have natural immunity now — that we still have to get a shot,” she added.

“It’ll be over my dead body that I’ll have to get a shot. I will not do it. I won’t do it, and they better not touch my kids either,” Palin said.

She encouraged the audience of thousands that there is power in numbers if people resist complying with vaccine mandates.

Dr. Jeffrey Klausner — a clinical professor of population and public health sciences at the University of Southern California — told Kaiser Health News in October, Fauci has not been as definitive on the subject of natural immunity as Palin recalled.

“Everyone is just waiting for Fauci to say, ‘Prior infection provides protection,’” Klausner said.

He pointed to a study performed by Israeli researchers which was published in August. The study has not yet been peer-reviewed.

The journal Science reported the study relied on a database of 2.5 million Israelis enrolled in Maccabi Healthcare Services.

“In one analysis, comparing more than 32,000 people in the health system, [the study found] the risk of developing symptomatic COVID-19 was 27 times higher among the vaccinated, and the risk of hospitalization eight times higher” than those who had recovered from COVID, Science reported.

During a CNN interview in September, Fauci hedged when asked about the Israeli study saying “there could be an argument” that those who have recovered don’t need to get vaccinated.

However, “The one thing the paper from Israel didn’t tell you is whether or not — as high as the protection is with natural infection, what’s the durability compared to the durability of a vaccine?” Fauci said.

“You may not be protected for an indefinite period of time,” he added.

Well, other Israelis researchers looked at the very issue in a study released earlier this month — which, like the first study, is not yet peer-reviewed — and determined that natural immunity is stronger both in the early months and over time than two doses of the Pfizer vaccine.

The study concluded, “Protection from reinfection decreases with time since previous infection, but is, nevertheless, higher than that conferred by vaccination with two doses at a similar time since the last immunity-conferring event. A single vaccine dose after infection helps to restore protection.”

The Centers for Disease Control and Prevention encourages people to get vaccinated after COVID recovery for heightened protection. It is also recommending a third booster shot six months after the primary shot regimen, particularly for the immunocompromised.

The agency acknowledges natural immunity is real, but clearly, it is not comfortable advising people to rely on that protection given potential variables involved, such as the severity of the illness, age of the person, etc.

The Brownstone Institute, an Austin, Texas-based nonprofit that opposes lockdown and champions academic freedom, compiled a list in October of 30 studies showing that those who have recovered from the coronavirus have robust immunity.

The August Israeli study was among those Brownstone cited.

Dr. Marty Makary, a professor at the Johns Hopkins University School of Medicine, has written that the strength of natural immunity from COVID has not been appropriately recognized by policymakers.

“During every month of this pandemic, I’ve had debates with other public researchers about the effectiveness and durability of natural immunity,” he wrote in a piece published by U.S. News & World Report in August.

“I’ve been told that natural immunity could fall off a cliff, rendering people susceptible to infection. But here we are now, over a year and a half into the clinical experience of observing patients who were infected, and natural immunity is effective and going strong,” he recounted.

“And that’s because with natural immunity, the body develops antibodies to the entire surface of the virus, not just a spike protein constructed from a vaccine.”

Makary argued that rather than categorizing people as being vaccinated and unvaccinated, the better designations would be “immune and the non-immune.”

He tweeted on Tuesday there are now 140 studies that back the efficacy of natural immunity.

It also is completely dismissive of natural immunity, now supported by 140 studies https://t.co/Gy95i9qb8U

In other words, many in the medical field recognize it, so Palin is clearly not alone in her thinking.

The CDC and at least one study show getting a COVID shot will provide further protection, so that’s something for people to weigh as the omicron variant makes its way through the country.

Continue reading: Sarah Palin Rails Against COVID Vax: ‘It Will Be Over My Dead Body That I’ll Have to Get a Shot’ ...