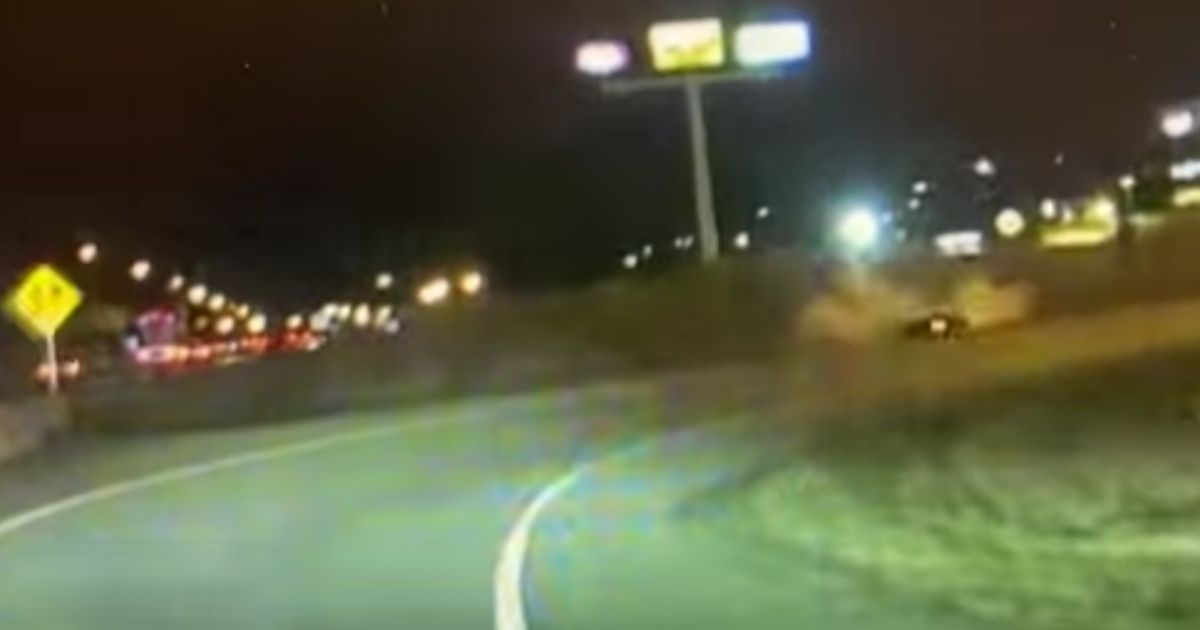 The following article, Officer Saves Toddler and Baby from Sinking Car after Driver Flees Police and Crashes into Pond, was first published on Flag And Cross.

St. John police officer Darrell Shaffer has seen some horrible things during his 24 years on the job, but what he saw on Dec. 12 left him choking back tears.

The situation started when a car was pulled over at around 11:08 p.m. for a traffic stop in St. John, Indiana. Police learned the 26-year-old male in the car had an outstanding warrant for failure to appear on drug-related charges, according to NWI Times.

Shortly after the car pulled over, the man jumped out of the car and ran, while the 24-year-old female drove off and led police on a chase over state lines.

Shaffer was one of the officers who followed the car from Indiana to Illinois and back to Indiana again, where driver lost control. The car veered off the roadway on an exit ramp.

Police dashcam shows the vehicle splashing into a retention pond and Shaffer jumping out and investigating.

At the time, the concern was that there might be children in the car, though Shaffer didn’t know for sure if there were or not. He quickly dropped 40 pounds of gear and approached the car while other officials told the driver to keep her hands out the window.

As Shaffer approached, he saw a 3-year-old girl floating in the back seat of the car.

“I didn’t know how much time I had to get her out,” he said during a news conference.

After removing the toddler through the passenger side window, he was urged to keep looking for a baby, but he couldn’t see anything that looked like a baby. He opened the back door of the vehicle.

“All I could see was water, and then there was two bags of clothes that I moved out of the way and I still couldn’t see the baby,” the officer said.

“And then I … I reached in the water and I felt the leg, then I pulled her upside down out of the water and handed her to the Lake County sheriff’s officer that was on the embankment to get her to an ambulance.”

Choking up, he described the 8-month-old as unresponsive, not breathing, not crying, her face frozen in terror. She’d been underwater for at least 90 seconds.

“I didn’t know if she was breathing,” he recalled. “I just wanted to get her out of that water and into the medic’s hands.”

By some miracle, he had reached the girls in time and was rewarded with the sight of both of them conscious and alert in the back of the ambulance before they were taken to Comer Children’s Hospital in Chicago.

A father himself, Shaffer said the encounter was especially difficult.

“(The children) did nothing wrong,” he said. “They were in a bad situation that they shouldn’t … ever have been put in.

“It’s just hard. I mean, we see stuff as officers, and firemen, and EMS, and all first responders. We see stuff that people should just never see, you know, and sometimes it hits home.

“In a high-speed pursuit like that, you don’t want anything bad to happen to anybody.”

Since that evening, Shaffer’s actions have been recognized by people near and far, not least of all Police Chief Steven Flores.

“We are very fortunate that he was there when he was and he got to them as soon as possible,” Flores said. “I truly believe that … his efforts saved those kids’ lives.

“The St. John Police Department, and our entire community, is extremely proud of Officer Shaffer and his heroic efforts. He did not hesitate, and his actions went above and beyond to save the lives of not only one, but two children.”

The girls are in the care of the Indiana Department of Child Services. The adults in the car are facing potential charges: a criminal charge for fleeing for the male, and two counts of felony neglect of a dependent as well as a felony resisting charge for the female.