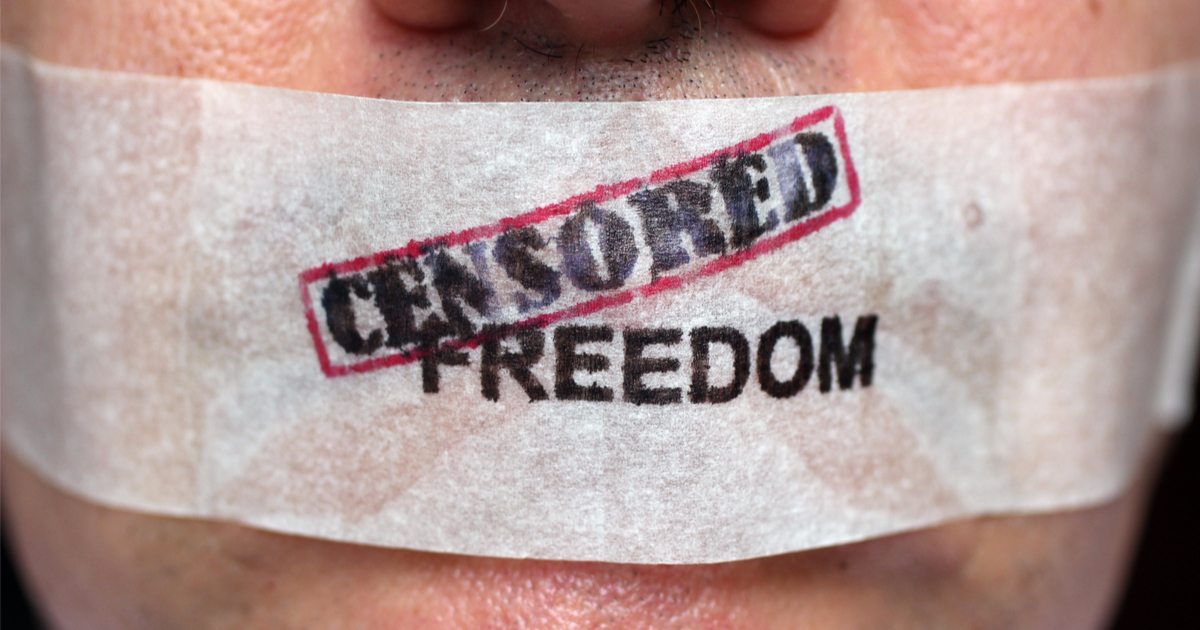 The following article, How Did Big Tech Censor Conservatives in 2021? Here’s Six Huge Ways, was first published on Flag And Cross.

As the year 2021 comes to a close, the biggest tech story didn’t have to do with new hardware or stock offerings. No, it didn’t even involve Mark Zuckerberg’s creepy metaverse demo — although it tangentially touches on the problem.

Instead, it had to do with Big Tech going into censorship in a big way, particularly after former President Donald Trump was out of office and Democrats gained control of the Senate in January. Seemingly freed from any check on their power — except for Democrats who demanded they become more censorious — they could do whatever they want. Lo and behold, that didn’t mean banning Democrats.

Of course, we’re well-acquainted with Big Tech’s bias, particularly when it comes to demonetizing us when we report on topics like vaccine issues or transgender issues. Companies like Google are invested in social engineering on a massive level — and we’re dedicated to fighting this. You can help us in our fight by subscribing.

At the conservative Media Resource Center, writer Brian Bradley cataloged the 12 worst cases of censorship he saw this year. The fact that there were some I could think of that didn’t make the list should show you how rotten this annus horribilis was. Here are, however, six of the 12 worst.

All the largest mainstream social media sites banned then-President Trump in the immediate aftermath of the Jan. 6 Capitol incursion.

The first was Facebook, which banned him on Jan. 7.

“We believe the risks of allowing the President to continue to use our service during this period are simply too great. Therefore, we are extending the block we have placed on his Facebook and Instagram accounts indefinitely and for at least the next two weeks until the peaceful transition of power is complete,” Facebook CEO Mark Zuckerberg said in a Facebook post. That two-week ban became indefinite shortly after.

Subsequently, the platform’s oversight committee announced in May that it would set a timeframe for Trump’s return after an indefinite ban was ruled to be against Facebook’s oversight rules. In June, they decided it would last for at least two years — until January of 2023.

The Board also found Facebook violated its own rules by imposing a suspension that was ‘indefinite.’ This penalty is not described in Facebook’s content policies. It has no clear criteria and gives Facebook total discretion on when to impose or lift it.

“We will evaluate external factors, including instances of violence, restrictions on peaceful assembly and other markers of civil unrest,” said Facebook vice president of global affairs Nick Clegg, in a statement.

Twitter would go on to ban him too — although, as Bradley noted at the MRC, “the site still continues to host foreign dictators and pro-genocide propaganda.” Trump had over 88 million followers at the time his account was banned.

YouTube was the last to ban him on Jan. 12. None have reinstated him.

Have an opinion that differs, even slightly, from the COVID consensus? Twitter doesn’t want to hear it.

“You may not use Twitter’s services to share false or misleading information about COVID-19 which may lead to harm,” Twitter announced earlier this month.

“Even as scientific understanding of the COVID-19 pandemic continues to develop, we’ve observed the emergence of persistent conspiracy theories, alarmist rhetoric unfounded in research or credible reporting, and a wide range of false narratives and unsubstantiated rumors, which left uncontextualized can prevent the public from making informed decisions regarding their health, and puts individuals, families and communities at risk.”

What does this entail? Who knows? One thing is for sure, however — it’s not going to be liberals caught in the crossfire of the new policy.

3) Amazon bans books that deviate from the liberal party line of transgenderism.

In March, Amazon — which has displaced almost all local booksellers at this point — announced the company would no longer carry books that didn’t embrace transgenderism as right, pure and natural.

The online megastore refused to sell Ryan T. Anderson’s “When Harry Became Sally,” having stopped carrying it in February. After Republican senators sent Amazon an open letter, the company responded to Anderson’s tome specifically: “As to your specific question about When Harry Became Sally, we have chosen not to sell books that frame LGBTQ+ identity as a mental illness,” it read, according to The Wall Street Journal.

“Amazon has finally responded. Everyone agrees that gender dysphoria is a serious condition that causes great suffering. There is a debate, however, which Amazon is seeking to shut down, about how best to treat patients who experience gender dysphoria,” Anderson tweeted.

“Gender dysphoria is listed in the APA’s Diagnostic and Statistical Manual of Mental Disorders, which Amazon sells. So the real deciding factor seems to be whether you endorse hormones and surgery as the proper treatment or counseling.”

Gender dysphoria is listed in the APA’s Diagnostic and Statistical Manual of Mental Disorders, which Amazon sells. So the real deciding factor seems to be whether you endorse hormones and surgery as the proper treatment or counseling. https://t.co/q6DNctHQyn

In addition, Amazon refused to run advertisements about Abigail Shrier’s book about the effects of the transgender craze on young people — although it continues to sell it.

4) Social media refuses to allow information questioning the results of the 2020 election.

There are certain things that fall under the aegis of conspiracy theories that Big Tech has decided you’re now no longer allowed to have — and all of them fall on the conservative side of the fence. One of them, unsurprisingly, involves the results of the 2020 election.

“On Feb. 5, Twitter censored a quote-tweet by journalist Tim Pool of Gateway Pundit journalist Cassandra MacDonald (formerly Cassandra Fairbanks), who had tweeted a video showing a van arriving at a Detroit voting location several times in the morning and apparently unloading dozens of boxes each trip. Twitter labeled Fairbanks’ tweet with its most restrictive label, which reads: ‘This claim of election fraud is disputed, and this Tweet can’t be replied to, Retweeted, or liked due to a risk of violence.'”

There were other censorship issues, including Twitter banning the account of Gateway Pundit founder Jim Hoft — a notable skeptic when it came to the results.

Consider it a conspiracy theory — but don’t expect anyone to be banned for a panoply of other conspiracy theories, including baroque theories involving the Jack Kennedy assassination or 9/11 trutherism.

In September, Lila Rose — president of pro-life group Live Action — announced that Google had banned her ads from its platform. The banned ads were for Heartbeat International’s Abortion Pill Reversal, which stops the treatment from working. Rose said it had saved 2,500 children by the time the platform had shut it down, leading one to an awfully good idea regarding what Google’s priorities are.

.@Google has also banned the promotion of our Baby Olivia video, a medically accurate (& accredited by OBGYNs), lifelike animation of human development in the womb, citing “unreliable claims.”

This is the video banned from ads: https://t.co/CwR2L2hKug

“Google disingenuously cites ‘unreliable claims’ as their reason to ban the promotion of Abortion Pill Reversal, but has obviously failed to understand the FDA-approved treatment that the reversal technology uses,” Rose said at the time.

“Live Action and pro-life medical professionals across the country are proud to promote the Abortion Pill Reversal regimen, which involves an FDA-approved, bioidentical pregnancy hormone called progesterone that has been used for dozens of years to prevent miscarriage and has already saved thousands of lives.”

Meanwhile, while Google was busy looking out for ads from anti-abortion groups, TikTokers found a game hiding in plain sight on the Google Play store which allowed the player to molest his sister as one of the challenges — and it was being advertised with just that scene. Nice work, everyone.

It’s no secret that Big Tech doesn’t like Project Veritas, but it wasn’t empowered to move against the undercover journalism outfit until this spring. When the group released a video showing a CNN staffer bragging that the network won the presidency for Joe Biden, Twitter banned founder James O’Keefe from the platform in April.

O’Keefe launched a defamation suit after he said the network accused him of operating fake accounts to amplify Project Veritas.

“A Twitter spokesperson pointed us to a section in the company’s rules which state: ‘You can’t mislead others on Twitter by operating fake accounts,’ and ‘you can’t artificially amplify or disrupt conversations through the use of multiple accounts,’” he said at the time.

“I am suing Twitter for defamation because they said I, James O’Keefe, ‘operated fake accounts.’ This is false, this is defamatory, and they will pay,” O’Keefe said. “Section 230 may have protected them before, but it will not protect them from me.”

This is just half of Bradley’s list, which also includes the banning of COVID-skeptical journalist Alex Berenson from Twitter and the Facebook papers, which documented the pernicious influence of the social media giant and how it worked to suppress content.

What will 2022 hold? It promises to be another year during which the pandemic continues to hold the world in its grip. Former Twitter CEO Jack Dorsey resigned last month and his replacement, Parag Agrawal, has made it clear he has a political animus against conservatives and plans to put his thumb on the scales of free speech.

There are only two things we know for sure. First, it’ll likely get worse before it gets better. Second, we’ll be making this list next year, too.