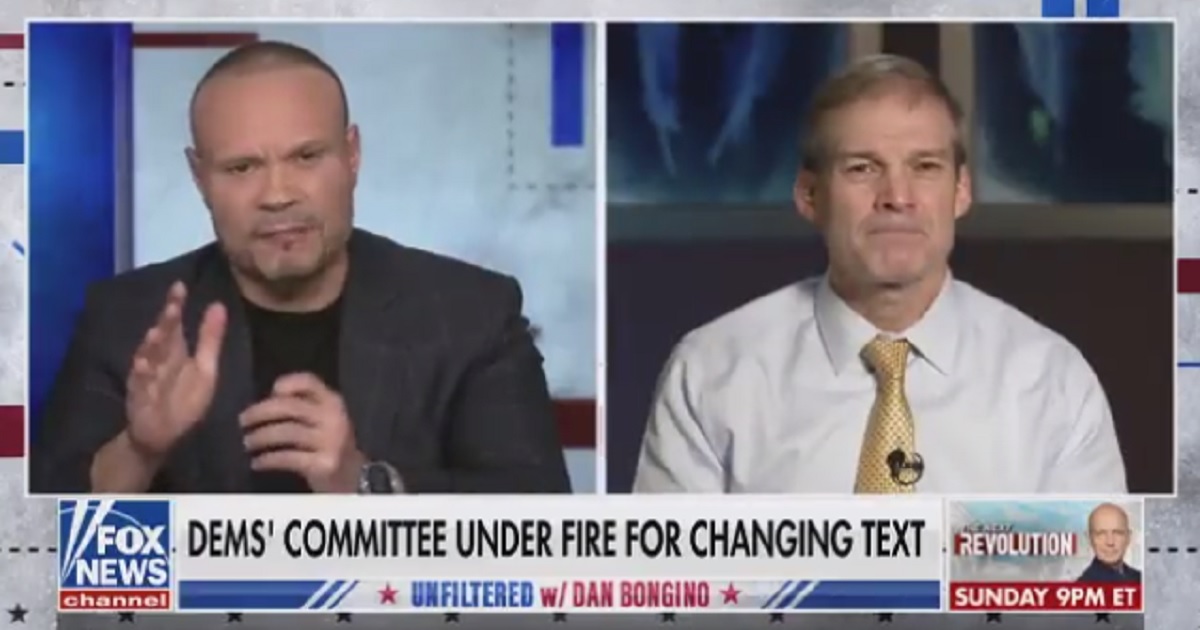 That the Trump-hating House committee investigating the Jan. 6 Capitol incursion is a fishing expedition designed to discredit the Make America Great Again movement is obvious to any semi-objective observer. The tactic is all too familiar.

The Russian collusion hoax, the Ukraine whistleblower fiasco and the Jan 6 committee are highly publicized examples of Democrats lying in the attempt to create reality. All three of these examples have at least one thing in common: California Democratic Rep. Adam Schiff, chairman of the House Intelligence Committee.

Schiff has a habit of lying to the American people about his political opponents — and who knows what else. Lying, as any child is taught, is a red line that, if crossed, will have consequences. Or will it?

The fact that Schiff is a liar is telling, as Fox News host Dan Bongino pointed out in an interview Saturday with Republican Rep. Jim Jordan of Ohio. In the interview, the “Unfiltered with Dan Bongino” host emphasized that not only do Democrats lie, they have a pattern of doing so for political purposes.

And now Schiff, along with the rest of the Jan 6 crew, is trying to put Mark Meadows, who served as chief of staff to former President Donald Trump, in jail for alleged contempt of Congress.

As The Associated Press reported, the Democratic-controlled House voted Dec. 14 to charge Meadows with contempt over his decision to cease cooperating with the committee, formally known as the Select Committee to Investigate the Jan. 6 Attack on the United States Capitol.

“Mark Meadows, didn’t do a darn thing wrong,” Jordan said in the interview, “and now they’re trying to put him in prison.”

“Mark Meadows didn’t do a darn thing wrong, and they’re trying to put him in prison”@Jim_Jordan reacts to the attempts to take down @MarkMeadows in the January 6th hearings @dbongino pic.twitter.com/zkJbSE1aYr

Habitual lying, is a sure sign that something’s not right. Altering documents is not only crossing a red line, it is a crime. This doesn’t deter Adam Schiff. He’s gotten away with such deceptions before.

Schiff claimed repeatedly that he had “direct evidence” in the Russian collusion hoax, according to Fox News. It was a lie, and Schiff got away with it.

Clinesmith got a slap on the wrist. Not only was he only sentenced to 12 months probation, he hadn’t even finished out that probation when his “good standing” as a lawyer was gifted back to him.

And now, the Jan. 6 committee is in the game.

There are no red lines, as far as Democrats are concerned. Full steam ahead.

According the The Federalist, Schiff and select committee staff altered an email between Rep. Jordan and Mark Meadows to present to the Jan. 6 Committee.

On the morning of Jan. 5, 2021, Jordan used a text message to forward Meadows a legal summary from attorney Joseph Schmitz focused on congressional certification of the 2020 presidential electoral vote count. It was a legal summary. There’s nothing sinister about that.

Yet when he presented it to the committee, Schiff presented a distorted version of that text, ending a sentence where it did not end originally, and cutting out two full paragraphs of legal analysis.

The alterations gave the impression Jordan and Meadows were having a discussion they weren’t.

When pressed by The Federalist, a Democratic spokesman for the Jan. 6 committee sent an email that stated, “The Select Committee on Monday created and provided Representative Schiff a graphic to use during the business meeting quoting from a text message from ‘a lawmaker’ to Mr. Meadows. The graphic read, ‘On January 6, 2021, Vice President Mike Pence, as President of the Senate, should call out all electoral votes that he believes are unconstitutional as no electoral votes at all.’”

Here’s the kicker. The spokesman admitted that, “In the graphic, the period at the end of that sentence was added inadvertently. The Select Committee is responsible for and regrets the error.”

What the spokesman failed to answer was how on earth a sentence could be cut off midstride and the next two paragraphs of the legal summary that gave context were deleted. How stupid do these people think Americans are? Schiff and his crew regret getting caught, nothing more.

It’s all about optics for leftists. When the truth gets in the way, they try to delete it. Funny thing is, the truth always remains — seen or unseen.

In the interview with Jordan, Bongino stressed the fact, “The purpose of Congress is not to be a law enforcement entity.”

The purpose of the subpoena for Meadows to appear before the Jan 6 committee was supposedly for some “legislative intent.”

What is the legislative intent of the Jan 6 committee? To outlaw the MAGA movement and label Trump and anyone who supports him a criminal? That’s what it looks like. Talk about bad optics.

It’s no wonder that famed Harvard law professor Alan Dershowitz has likened House Democrats to Stalin in the past. In a 2019 interview with CNS News, Dershowitz said, “What they’re trying to do is what the KGB under Lavrentiy Beria said to Stalin the dictator — I’m not comparing our country to the Soviet Union, I just want to make sure it never becomes anything like that.”

Beria, a  Stalin henchman, told Stalin, “Show me the man and I’ll find you the crime.”

That was then, this is now. Marxism under any other name stinks the same.

Trump-hating politicians will do anything to prevent Trump from running again. In the interview with Bongino, Jordan made it clear that this — deleting Trump and his supporters from the American political process — is the real purpose of the Jan. 6 committee.

That’s downright anti-American. If the Russian collusion hoax and the Ukraine debacle are any indicator, the Jan. 6 committee will go home hungry from this fishing expedition as well. There’s likely no fish swimming in that pond. They’ve poisoned the water with their lies.

The Jan. 6 committee has no credibility. It’s a sham.