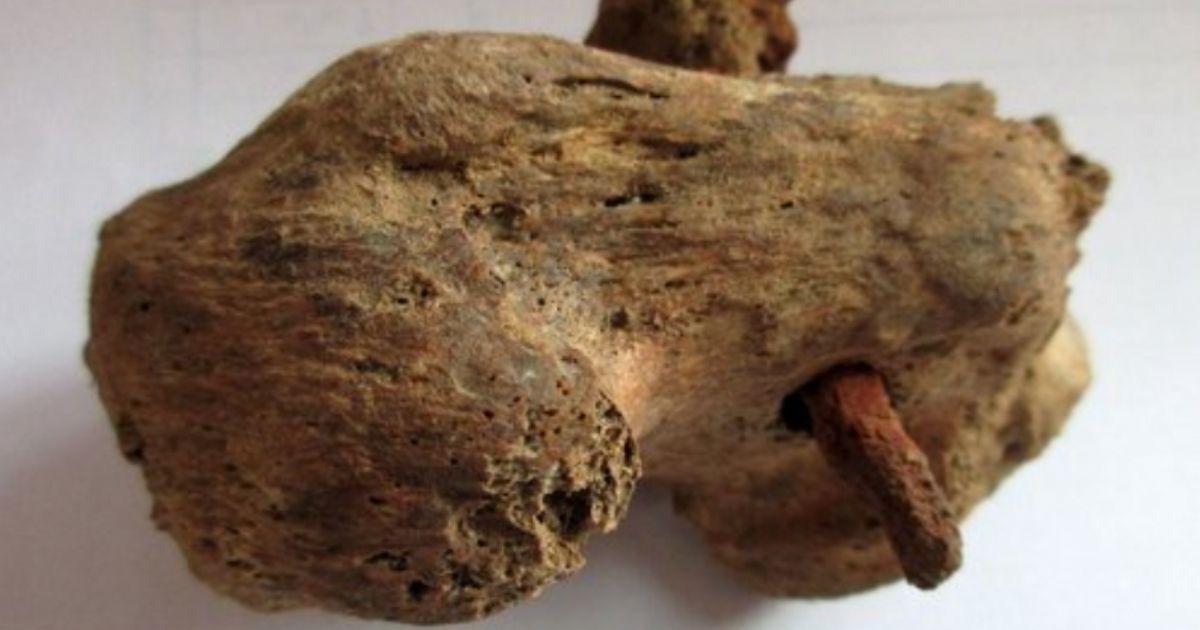 The following article, Archeologists Stunned After Full Skeleton of Crucifixion Victim Uncovered in U.K., was first published on Flag And Cross.

In 2016, Albion Archaeology began assessing an area in Fenstanton, Cambridgeshire, ahead of a proposed housing tract being built. They uncovered a sizeable Roman settlement, previously unknown, that seemed to suggest it had covered quite a large area.

In 2017, they started to assess a nearby area for another housing development and found more of what appeared to be the same large, previously unknown settlement.

There was pottery. There were many animal bones suggesting particular trades and practices. There were buildings. There were cemeteries — but perhaps most fascinating of all, there was what appeared to be very rare evidence for a style of crucifixion that uses nails. (Many times, victims were tied rather than nailed to a cross.)

According to the British Archaeology Magazine, this is only the fourth find that suggests this particular kind of crucifixion, and it’s the first known case in northern Europe.

The only prior known case of likely crucifixion where a nail was still present was found in Giv‘at ha-Mivtar, Jerusalem. The nail in that case was in exactly the same spot as it was in the heel of the skeleton found in Fenstanton.

The magazine continued to explain that the nails were thought to have been removed before burial or disposing of the body to be re-used later, but the nail in the heel of the northern European case was bent, making its removal difficult.

Another difficulty is that the bodies of the crucified weren’t always buried in cemeteries, making it difficult to find any evidence. But this particular specimen — named Skeleton 4926 — was.

The nail wasn’t even found until the skeleton was being cleaned back at the laboratory, though 12 additional nails were found around the skeleton. The position of the nail suggested that the feet had been nailed to the sides of the cross, rather than to the front.

Despite the age of the settlement being dated at around the first or second century A.D., specialists were able to determine quite a bit about the man Skeleton 4926 had been.

“The skeleton was that of a man aged roughly 25–35, with signs of poor dental health and arthritis that were common among many of the people buried here,” a statement by Albion Archaeology read.

“There were also signs of thinning on his lower legs, which may have been caused by infection or inflammation or perhaps by local irritation from being bound or shackled.”

“Twelve nails that were found around the skeleton suggest that he had been placed on a board or a bier (probably not in a coffin), but the 13th had passed horizontally through his right heel bone (calcaneum). It seems implausible that the nail could have been accidentally driven through the bone during construction of the timber support on which the body was placed –- indeed, there are even signs of a shallow second hole that suggests an unsuccessful first attempt to pierce the bone.”

Scientists are still curious as to what the man’s status was, as he appears to have been crucified and yet was given a proper burial. Crucifixion was banned in A.D. 212 for citizens, though there were still some serious crimes that could be punished with crucifixion, and slaves could still be crucified for essentially any grievance — no matter how small.

“It’s essentially the first time that we’ve found physical evidence for this practice of crucifixion during an archaeological excavation,” dig leader David Ingham of Albion Archaeology told the Daily Mail.

“You just don’t find this. We have written evidence, but we almost never find physical evidence.”