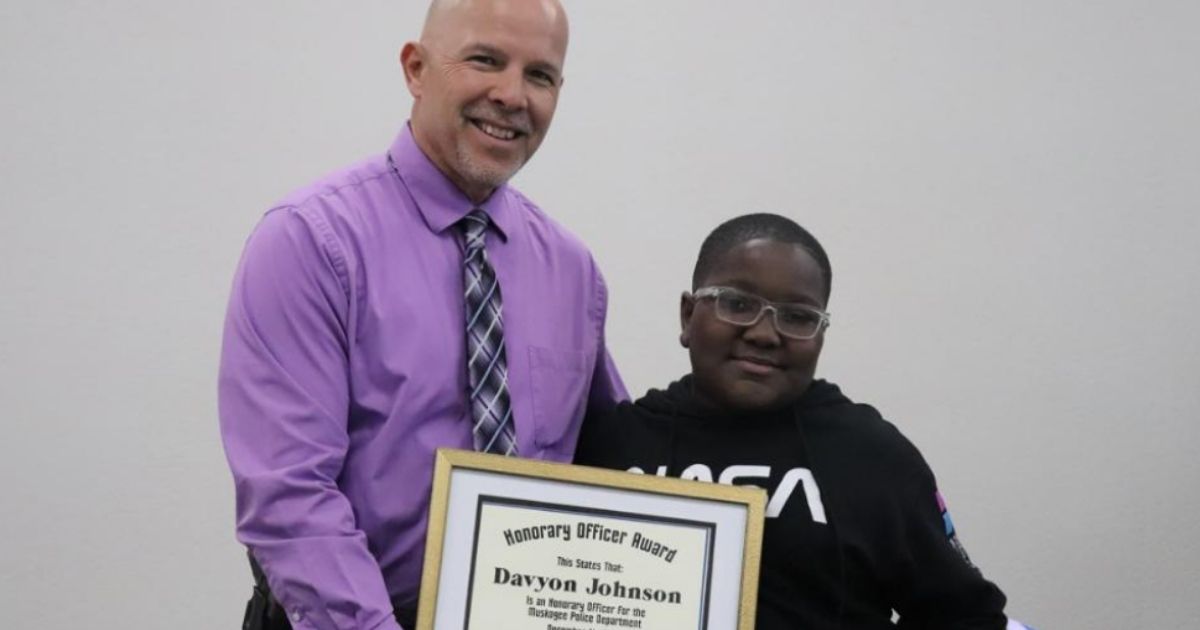 Anyone of any age can be a hero, including an 11-year-old boy from Oklahoma who saved two lives in one day this month.

Muskogee sixth-grader Davyon Johnson began his day by coming to the aid of a student who was choking on a bottle cap — by using techniques he saw online.

Later that day, Johnson helped a woman flee a burning house, according to the Muskogee Phoenix.

To recognize his work, the Muskogee Police Department, Muskogee County Sheriff’s Office and Muskogee Public Schools honored Johnson at a school board meeting, naming him an honorary member of the police and sheriff’s departments,

“I felt good, excited,” Johnson said, according to the Muskogee Phoenix.

“He has always indicated that he wants to be an EMT. So he got to put that desire into action and immediately saved that young man,” Dawson said, discussing the first incident.

“He is just a kind soul and well-liked by his peers and staff alike,” she said.

Dawkins said that during school, at the 6th and 7th Grade Academy, a student trying to loosen the cap of a water bottle with his mouth ended up with the cap in his throat. The student made his way to a classroom in which Johnson was present.

“Davyon immediately sprinted over and did the Heimlich maneuver,” Dawkins stated. “From the account of the witnesses, when he did it, the bottle cap popped out.”

A sixth grader in Oklahoma was honored for heroism for jumping into action to save a classmate who was choking and rescue a woman from a house fire all in one day. https://t.co/vUPjXN7vh9

Johnson, who in speaking of the choking student said he “burped him kind of,” stated he learned the Heimlich maneuver by watching videos on YouTube.

But Johnson’s heroic acts were not done. Later that day, he came upon a woman fleeing a burning house.

“It was a disabled lady, and she was walking out of her house,” Johnson explained. “She was on her porch. But I thought, being a good citizen, I would cross and help her.”

“I thought ‘oh, she’s not moving fast enough.’ So I ran across the street and helped her to her truck,” he recounted, according to KOTV-TV.

LaToya Johnson described how she felt about her son’s achievements to the Muskogee Phoenix.