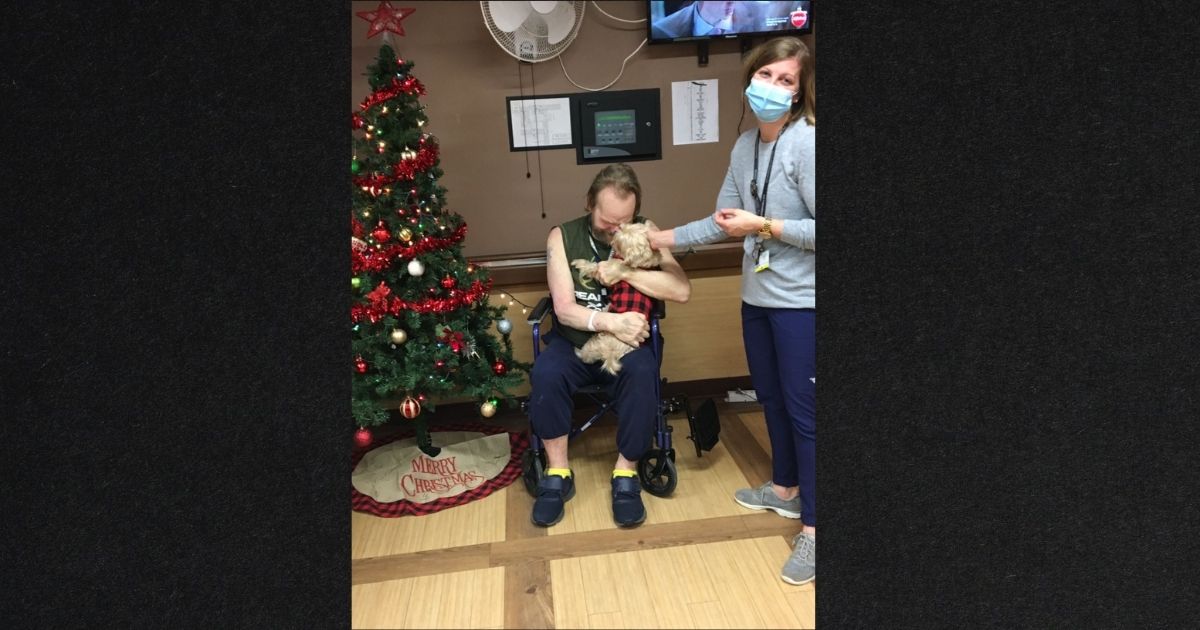 The following article, When Sick Patient Is Forced to Turn Dog Over to Shelter, Nurse Adopts It to Keep Them Together, was first published on Flag And Cross.

Many older people or people living on their own would benefit greatly from having some sort of animal companion, but some are worried about what would happen to their pet if something happened to them.

One man, 60-year-old John Burley from Rome, New York, had a beloved older dog named Boomer who was everything to him. He fell ill just before Thanksgiving and had to be hospitalized. With no one to help him out, he had to send Boomer to the Rome Humane Society.

It’s an unbearable thing, to have to send your pet to a shelter and have no other recourse. Thankfully, one of his former nurses thought so, too.

Jennifer Smith, 41, who had worked with Burley during his time at the Adult Day Healthcare program at The Grand Rehabilitation and Nursing at Rome, couldn’t stand the thought of what might happen to the older dog.

As soon as she’d heard where Burley’s faithful, four-legged friend was, she went to adopt him.

“Jennifer was calling the hospital to speak with John to get updates on his condition and to support him through this tough time,” Kimberly Hare with The Grand Rehabilitation and Nursing Home told Newsweek.

“John mentioned to her that he was devastated about losing his best friend, Boomer. It broke her heart to think that Boomer would be adopted by strangers and she couldn’t bear to think about what would happen if no one wanted to adopt this sweet 13-year-old dog.

“She went right to the Rome Humane Society that day and paid the adoption fee, took him to the vet, and went on a shopping spree for food, crate, toys, and doggy clothes. He is very spoiled.”

Burley was deeply grateful and very relieved upon hearing that Smith had scooped up Boomer. She called him every day to give him updates on the pup.

When it came time for rehab, Burley chose to return to The Grand. Smith planned a special reunion for the man and dog.

“On the day of his hospital discharge, Jennifer dressed Boomer in his best Christmas shirt and brought him to work,” Hare said. “John had no idea.

“Once John was settled in his room, Jennifer and Boomer made their way over to his nursing unit — but I told her to stay out of sight. I asked John if he was feeling up to a surprise visit and he said yes.

“When he saw Jennifer and Boomer come around the corner, he just burst into tears and reached for his pal. There was not a dry eye in the room between residents and staff. He was so happy to see the dog and so thankful to Jennifer for saving him.”

Now Boomer is a regular at The Grand, visits many people — but especially John — and has become something of a mascot.

“We are so incredibly proud of Jennifer’s dedication and selflessness. She provides the best care for our registrants and this is just one example of her outstanding commitment.”

We could use more Jennifers in the world!

Continue reading: When Sick Patient Is Forced to Turn Dog Over to Shelter, Nurse Adopts It to Keep Them Together ...