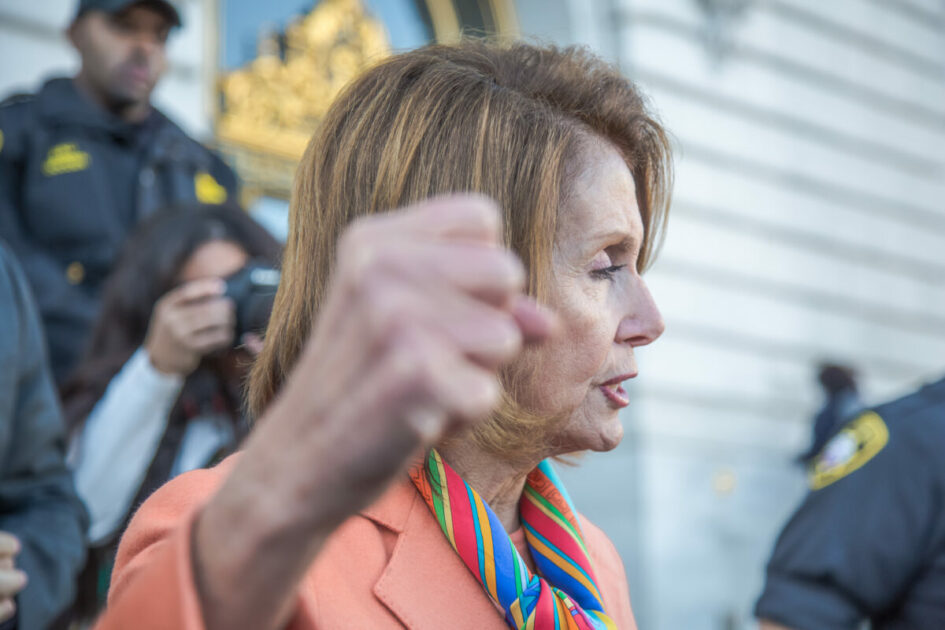 The following article, Watch Pelosi Jumps to Defense of Capitalism as Bill Threatens Her Fortune: ‘We Are a Free Market Economy’, was first published on Flag And Cross.

Last week, Business Insider reported that 52 members of Congress and at least 182 high-level staffers had violated the STOCK Act, which stipulates members of Congress, senior staffers or their family members must report stock purchases within 45 days of making them. The damage wasn’t limited to just one party; there was a mix of Republicans and Democrats on the list.

However, Pelosi’s Democrats are the ones with the power to make ethical reforms, like banning stock transactions by legislators or making them put their assets in blind trusts. She doesn’t want to do that, however, and there’s a reason — she’s made a load of money on Wall Street. (Not that the media is going to point this fact out. We will here at The Western Journal — where we try and keep all politicians honest. You can help our fight by subscribing.)

When asked by a reporter during a media briefing on Wednesday whether she would consider banning stock transactions by members of Congress, Pelosi scoffed at the notion.

“We’re a free-market economy,” she said. “They should be able to participate in that.”

“We have a responsibility to report” stock trades, Pelosi said. However, her solution was this: “But if people aren’t reporting [stock trades], they should be.”

REPORTER: “Should members of congress and their spouses be banned from trading individual stocks while serving in congress?”

PELOSI: “No…We are a free market economy. They should be able to participate in that.” pic.twitter.com/2SNqSCwFEU

It’s worth noting the STOCK Act, passed in 2012, doesn’t have a serious enforcement mechanism. Violators are fined $200, according to Business Insider — not necessarily big money, especially when you consider Pelosi’s husband made $5.3 million on a dodgy stock transaction right before a key House vote. One can afford it, too, when one’s personal wealth exceeds $120 million, like Pelosi’s does.

In May and June, according to Business Insider, Paul Pelosi purchased up to $11 million in big tech companies like Amazon, Apple and Alphabet, the parent company of Google.

The purchases came as the House of Representatives was working on antitrust legislation which ultimately did little to affect tech giants in any significant way. Pelosi ended up making $5.3 million, something that made news in July.

“Spokespeople for Speaker Pelosi told media outlets at the time that she had no knowledge of the purchases and that she owns no stock herself. Insider contacted Pelosi’s office but received no reply,” Business Insider reported in September.

“Although she didn’t break any rules, the trades were seen as fishy by many, and two memes based around Pelosi quickly sprung up. One is that the 81-year-old is a high-rolling, risk-taking star trader. Another is that she’s making the big bucks off of insider information.”

The memes were indeed beautiful:

Ok but what stocks are you buying?

Nance, what are you buying during this market downturn?

Respected Madam Speaker: any stock tips? Any insider knowledge will be extremely helpful. I’ll invest accordingly in those stocks and options. Thank you.

Thus, when Pelosi talks about the “free market,” what she’s defending is the ability of the men and women in Congress, with all of their inside information, to trade stocks as they see fit — even when they have their hands on the levers of power. This isn’t surprising when you consider that, according to Yahoo, Pelosi is the sixth-richest member of Congress, with a personal fortune of $120 million.

There’s both proposed legislation that would ban members of Congress from owning stocks and members of the progressive wing of the Democratic Party who are pushing it.

The Ban Conflicting Trading Act was introduced in March by Democratic Sens. Sherrod Brown of Ohio, Jeff Merkley of Oregon and Raphael Warnock of Georgia, according to Yahoo. However, the House version of the bill managed to draw sponsors as diverse as Democrat Rep. Alexandria Ocasio-Cortez of New York and GOP Rep. Matt Gaetz of Florida.

It is absolutely ludicrous that members of Congress can hold and trade individual stock while in office.

The access and influence we have should be exercised for the public interest, not our profit. It shouldn’t be legal for us to trade individual stock with the info we have. https://t.co/Z3UZej2eC2

It’s worth noting, then, that Pelosi’s defense of capitalism is more a defense of crony capitalism — the ability for legislators to make money off the stock market while having asymmetrical information about their trades compared to the rest of the buying public.

This kind of crony capitalism isn’t popular with the American public; when GOP Sens. Richard Burr of North Carolina and Kelly Loeffler of Georgia were revealed to have sold off stocks last year after receiving early briefings about the impacts of the coronavirus, both were pilloried; it arguably cost Loeffler her seat.

Politically, banning stock purchases for House members likely wouldn’t be a losing move for Pelosi. But personally, it could affect her $120 million fortune — and that’s something she’s apparently not willing to risk.

Continue reading: Watch Pelosi Jumps to Defense of Capitalism as Bill Threatens Her Fortune: ‘We Are a Free Market Economy’ ...