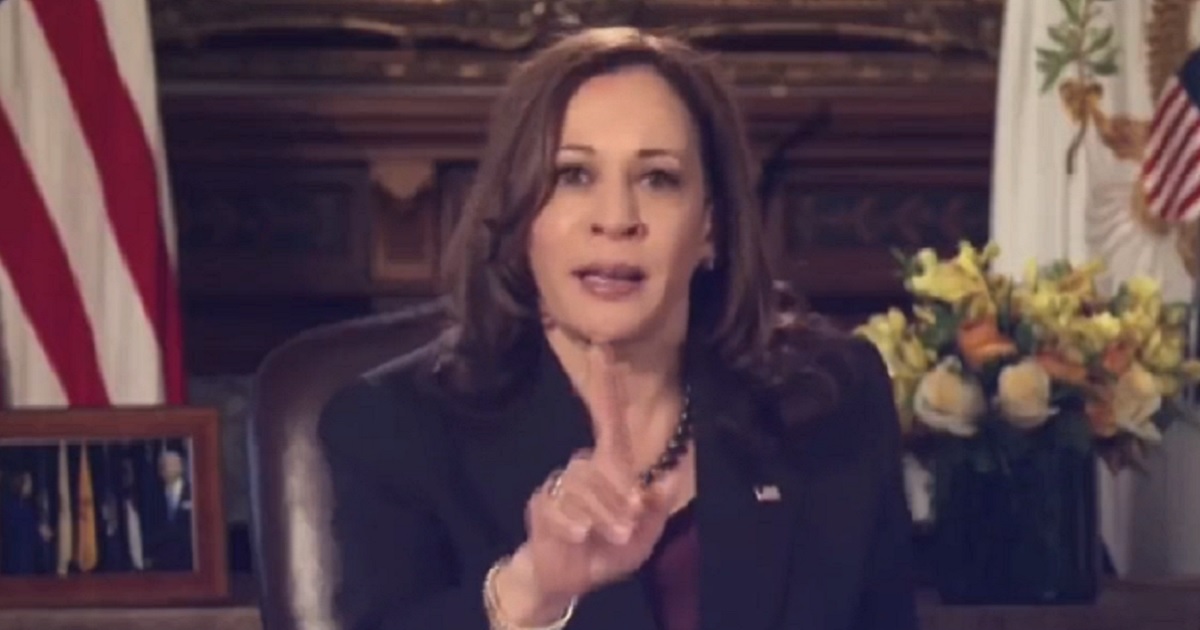 The following article, Watch: Kamala Harris Lashes Out During Interview After Being Asked Who ‘The Real’ President Is, was first published on Flag And Cross.

Vice President Kamala Harris, who has made a name for herself as not only the first black, female, and black female vice president, but also the least popular vice president in history (never stop following your dreams, ladies), got a little bit heated Friday when she was asked a silly, provocative question during a Comedy Central interview.

Harris joined host Charlamagne Tha God, whose programs are best known to me for the medium they provide to Democrats seeking to pander to black America, with varying degrees of success.

You may recall such hits as Joe Biden’s whitesplaining that the black voter who would choose President Donald Trump over himself “ain’t black” or the cringeworthy moment that Hillary Clinton told Charlamagne that she carried hot sauce around in her purse.

Harris already got herself in trouble under Mr. Tha God’s watchful eye during the 2020 Democratic primaries, having previously cackled heartily about the first time she smoked pot with callous disregard for all the black Californians sent to prison for pot during the time she served as the state’s attorney general and, what’s worse, it turned out to be a bogus story.

Of course, that was positively ages ago in the grand scheme of American political news, and, after all, Harris would go on to be selected as now-President Joe Biden’s running mate despite having publicly stated she believed the woman who accused him of sexual assault, so no one in her camp seems to have much faith in the fortitude of the American voting public’s long-term memory, anyway.

Joining Charlamagne (whose real name is Lenard Larry McKelvey) on his Comedy Central show, “Tha God’s Honest Truth” Friday, Harris touted the Biden administration’s “Build Back Better” economic package, which of course, since it involves lots of public spending, the administration condescendingly assumes can be sold off as the answer to all of black America’s problems.

However, the host struck a nerve when he asked what easily could have been interpreted as a softball question as to who the “real” president was, Joe Biden or West Virginia Senator Joe Manchin, one of two moderate Senate Democrats and a lawmaker standing in the way of the massive spending plan.

For Democrats, watching Biden’s agenda stalled, the question is embarrassing. And the vice president’s reaction was even more so.

Harris visibly flushed, and one got the impression she was resisting the urge to take her earrings and rings off and lunge at the screen.

“And don’t start talking like a Republican,” she continued, literally bouncing up and down in her seat as though she could barely remain in it, “about asking whether or not he’s president.”

“And it’s Joe Biden, it’s Joe Biden and I’m vice president and my name is Kamala Harris,” she continued as Charlamagne tried to talk, inexplicably reiterating her own position and name, for some reason.

She, at this point, was delivering a very assertive and sassy raised finger but appeared to fall short on substantial commentary for a moment, further underscoring the cringy anger that was either authentic or feigned to make a point, but either way, made for an incredibly bad look.

Our @VP can absolutely be the superhero that America needs to protect democracy if she applies *this* type of passionate pressure to progressive roadblocks like @Sen_JoeManchin. Hit our YouTube page to watch the full interview! Link in bio! #TGHT pic.twitter.com/BE2zRT5YlO

As though the heated reaction wasn’t a poor enough choice on its own, Harris went on to accuse Manchin of “holding up progress” and hurting black Americans with his refusal to vote for the administration’s radical social spending.

Ah, the old “if you oppose gratuitous social spending you must be a racist” line. I’m sure that’s all Manchin needs to hear to be convinced to betray his constituents (West Virginia voters went for then-President Donald Trump in the 2020 election by almost 70 percent), his personal convictions, and his fiscal common sense.

In a Twitter post with the interview, Charlamagne claimed to be very impressed with this display and declared that this was the Kamala Harris the world needed more of. Twitter commenters rather begged to differ.

What has @POTUS done for black America? Name me one thing

Inauthenticity at its finest

It was a fair question, and I’m glad it was finally asked. She never did give a solid answer, just talking points rolled into a spicy comeback.

No wonder her staff are all quitting… if she talks to people like this on a tv show imagine how she treats people behind closed doors.

There was a lot more of this, as remarkably, the majority of the comments were cynical and accused Harris and the Biden administration as inactivity and low rhetorical blows.

I couldn’t possibly say what Harris was going for here, but whatever it is, it flopped royally.

All she managed to show the American public was how sore of an issue it is with the administration that the entire Democratic Party hasn’t fallen in lockstep with their radical progressive agenda and that they are still, unfortunately, subjects to the checks and balances of our republican system.

Too bad for them — but millions of Americans who aren’t crazy about their agenda still have a seat at the table by way of their elected representatives in Congress, and by the look of Harris and Biden’s poll numbers, they’re not feeling very good about anything that’s going on in Washington D.C.

Harris can repeat “It’s Joe Biden” all she wants, we all know he’s doing a terrible job as president and, at least for now, his terrible plan for our economy has been thwarted.

Continue reading: Watch: Kamala Harris Lashes Out During Interview After Being Asked Who ‘The Real’ President Is ...