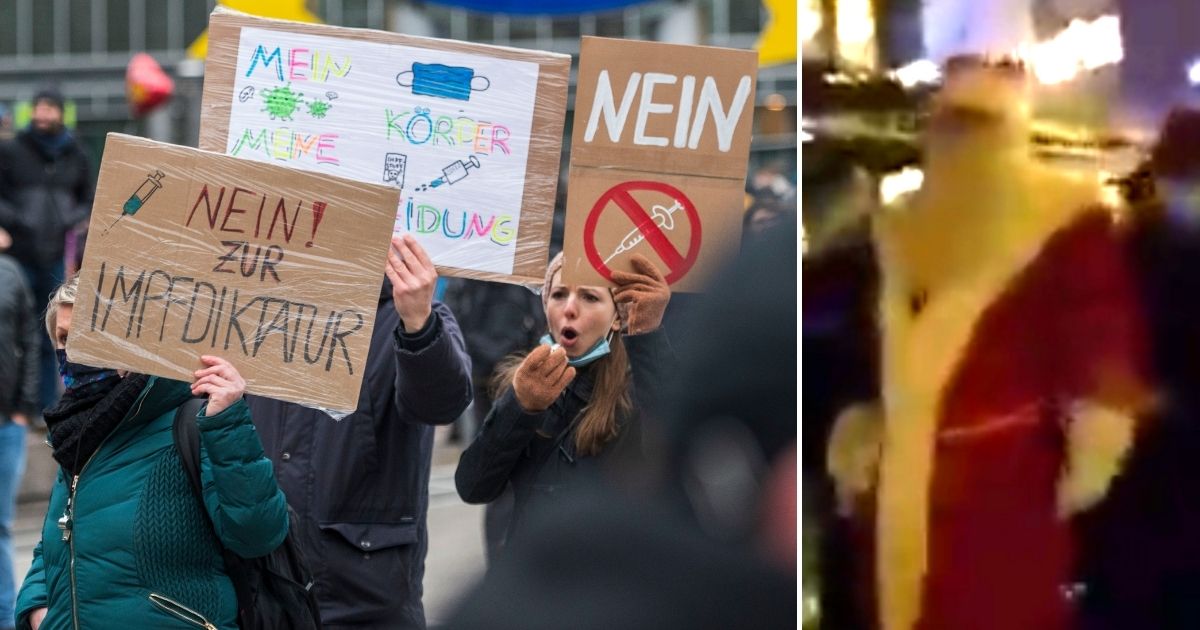 The following article, Santa Ripped from Bustling Christmas Market and Led Away in Handcuffs After Protesting COVID Measures, was first published on Flag And Cross.

Yes, Virginia, there is a Santa Claus — and he got arrested when he participated in a COVID-19 protest in Germany.

In the latest example of pandemic hysteria combined with zero tolerance for those who protest the government-sponsored COVID nanny state, a man dressed as Santa Claus was arrested at a Christmas market in the German city of Stralsund Monday after he protested new rules restricting access to activities deemed nonessential.

(These pernicious regulations could be coming back to the United States soon, too — and we’re dedicated to fighting forced compliance here at The Western Journal. You can help us fight by subscribing today.)

According to the Washington Examiner, the unidentified Santa was taken into custody after he refused to show identification and was led away in cuffs by the authorities.

“The 47-year-old from Stralsund was obviously an actor in the gathering,” local police said in a social media post, according to the Examiner. “He was not used as Santa Claus at the Christmas market there.”

Police defended the arrest in a social media post, “fact-checking” rumors that had spread on social media — such as that Santa had been arrested for not wearing a mask or that he worked in the market.

“At a non-registered meeting in #Stralsund a person in #Weihnachtsmann costume (Santa Claus) refused to give his personal details yesterday,” the post said, according to a Google translation.

“Those in attendance filmed it. We have a fact check on the video for you.”

However, it’s not like the video makes police look any better:

This is apparently what happens when Santa goes to a “non-approved gathering” — as the police described in their fact-check — and refuses to give identification.

“After the man’s identity was known, he was released from police measures at around 7:15 p.m. and is now at large again,” the police said in a media release (translated via Google).

“It subsequently emerged that the 47-year-old was suspected of having committed crimes against the Assembly Act in connection with demonstrations critical of [coronavirus restrictions].”

And as for the non-approved demonstration, it was in protest of draconian COVID restrictions imposed this month by German authorities.

According to CNN, outgoing Chancellor Angela Merkel and her successor, Olaf Schultz, announced that unvaccinated people who haven’t recently recovered from COVID would only be able to access the most basic public services — supermarkets, pharmacies and the like — and could only interact with two people from different households.

Furthermore, mandatory vaccinations could begin as early as February when they’re voted through parliament.

As for the vaccinated, they too bear some brunt from the new policies. Bars and nightclubs will be forced to shut down if the case rate in an area reaches a certain threshold and the government has limited the number of spectators at large events like soccer matches, CNN reported.

All that right jolly old elf wanted, it seems, was to live his life like he would if we were dealing with any other endemic disease. At this point, even the most fervid lockdown fanatic concedes that’s what we’re doing — and yet, Germany is partying like it’s 2020 and that the first priority of the government is to assure not a single person gets the novel coronavirus, normal life be damned.

Oh, for the police in Stralsund to be visited by the ghosts of lockdowns past, present and future this Christmas season.