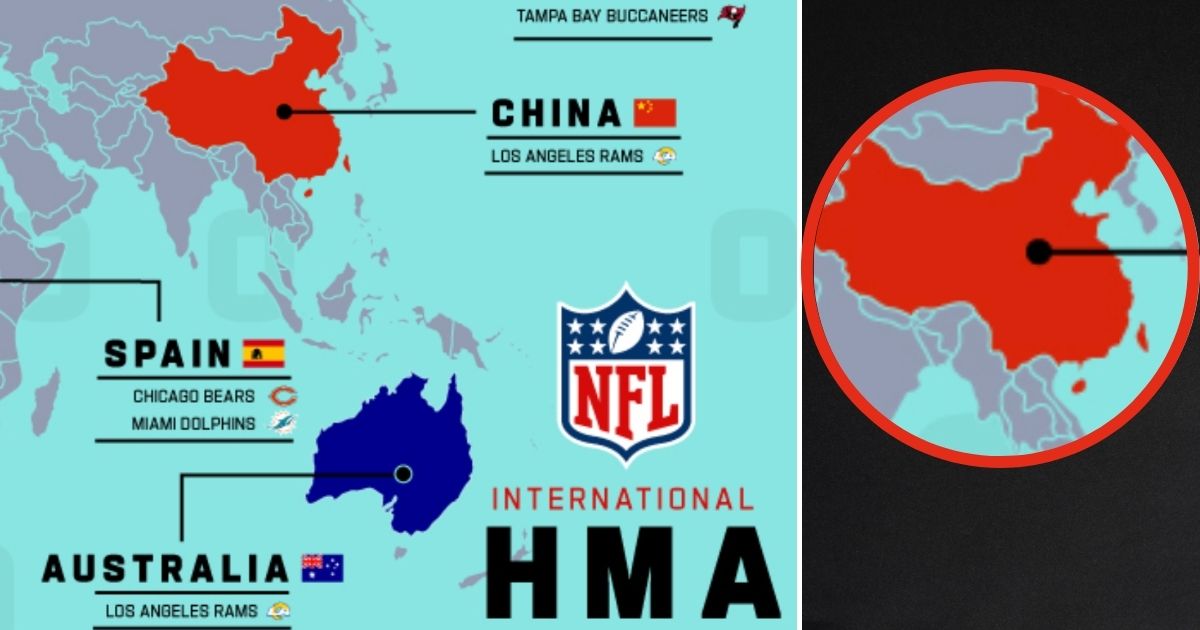 The following article, New NFL International Map May Appear to Short China, But Closer Look Reveals League Did a Big Favor for Them, was first published on Flag And Cross.

In a complete kowtow to China, the National Football League has included Taiwan as part of China in its map of countries where the NFL is marketing itself abroad.

The NFL announced Wednesday that 18 teams have exclusive rights to market in 26 so-called International Home Marketing Areas, according to an NFL release.

“NFL fandom begins with our clubs,” said Christopher Halpin, NFL Executive Vice President, Chief Strategy & Growth Officer. “This important initiative enables NFL teams to develop meaningful, direct relationships with NFL fans abroad, driving fan growth and avidity globally. We were very pleased with the number, creativity and level of commitment of club proposals across the board in this initial application period and look forward to teams launching their efforts early next year.”

China was one of two nations that will be the international fan base of the Los Angeles Rams.

But what generated the most attention was not which teams will now add foreign fans, but the NFL’s decision to cater to China’s whims by making Taiwan a part of China.

In 1949, the Nationalist government of China took refuge on the island — then called Formosa — just off the Chinese coast after losing the revolution to Mao Zedong. China’s Communist leaders consider that Taiwan is rightfully part of its turf. In recent months they have stepped up diplomatic and military pressure on the fiercely independent island, which has historically maintained its independence largely because of military aid from nations such as the U.S.

Republican Sen. Ted Cruz of Texas was among those who noted that the NFL is more than willing to cater to China for the sake of money.

The NFL, which is chasing dollars from the Chinese Communist Party, shows Taiwan as part of China. Disgraceful cowardice. https://t.co/EsDkUwJ3Dj

NEW: The NFL map announcing its International Home Marketing Areas (with the LA Rams getting China) endorsed the CCP’s claims that the island nation of Taiwan is part of the People’s Republic of China. So far no response from the NFL on why…@DCExaminerhttps://t.co/dNGr2jEwTH

When Fox News asked the NFL why the democratic nation of Taiwan was labeled the same color as the red of Community China, it said it did not get an answer.

China takes maps seriously. Earlier this year, China stomped its foot in a fit of diplomatic pique after NBC did not include Taiwan in its map of the communist nation as part of NBC’s Olympic coverage.

At the time, the Chinese consulate in New York said by not including what it wants but cannot have, NBC “hurt the dignity and emotions of the Chinese people,” according to NBC.

“The map is an expression of the national territory, symbolizing national sovereignty and territorial integrity,” its statement said, according to Bloomberg.

“We urge NBC to recognize the serious nature of this problem and take measures to correct the error,” the statement said.

China’s state-controlled Global Times newspaper also criticized NBC for not including Taiwan on its map, calling it part of the “dirty political tricks” being played against China.

With that in mind, on Friday, the Biden White House cut a Taiwanese official’s video feed because it showed China and Taiwan as separate colors on a map, according to Fox News.

Continue reading: New NFL International Map May Appear to Short China, But Closer Look Reveals League Did a Big Favor for Them ...