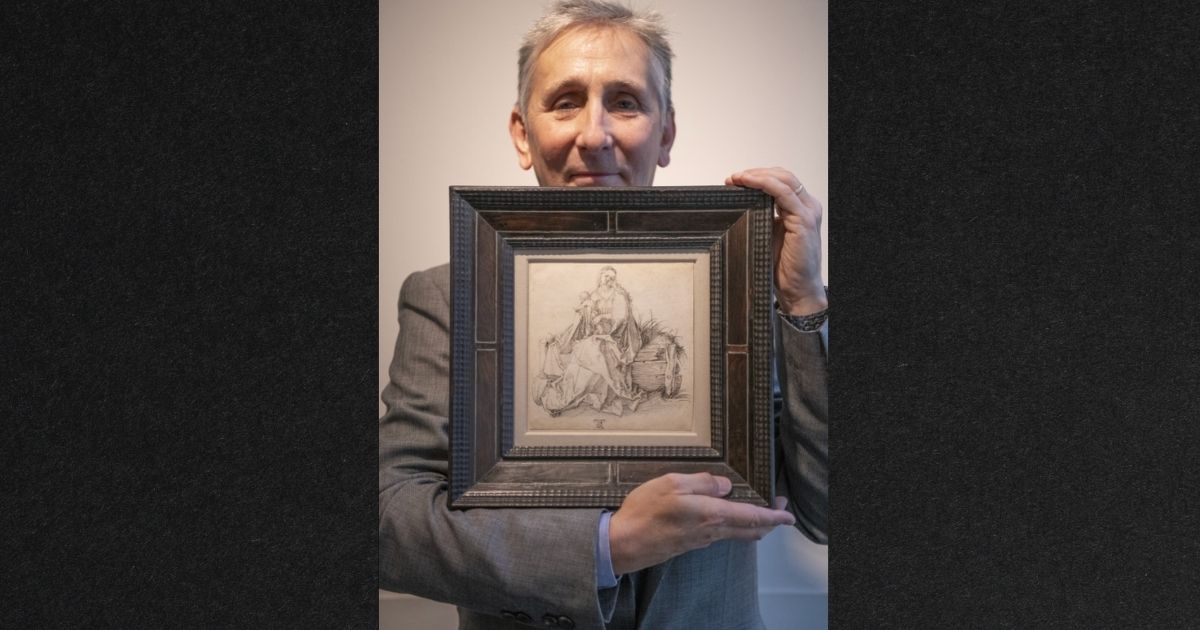 The following article, Discovery of A Lifetime: Man Buys Drawing For $30, Then Figures Out True Origin, was first published on Flag And Cross.

Everyone who scours estate sales, frequents thrift stores and buys the contents of old storage units hopes to land it big: To beat the system, to find a treasure worth far more than its price tag.

And there are enough stories like these that people keep hoping, searching and buying.

Clifford Schorer, former president of the Worcester Art Museum and art collector, made the discovery of a lifetime in a very roundabout way in 2019. He was headed to a retirement party for the director of the Yale Center for British Art, Amy Meyers, when he stopped along to way to nab an interesting gift from Brainerd Phillipson, a local who sold rarities out of his own home.

He managed to find a William Blake book of poetry, but before he left, Phillipson asked him a question that would change the trajectory of his life. Phillipson wanted to know if Schorer knew anything about art.

“Then Brainerd told me that his friend has an Albrecht Dürer drawing,” he told the New York Post. “I said, ‘No. He doesn’t have a drawing. He has an engraving. There are zero drawings by Dürer that are both unknown and privately owned.'”

A renaissance artist, Dürer’s paintings and drawings are rare. In 1978, one of his watercolors sold at Sotheby’s for $1.3 million.

With Schorer’s permission, Phillipson passed along his contact information to the friend.

“Eleven days later,” he told the Post, “I got a text with an image that looked like a typical print of Madonna and child, but it was so pixilated that I couldn’t see much. Then I got a higher resolution image and was dumbfounded.”

When he visited the man and finally saw the piece in person, he was shocked and certain that the piece was either an extremely skilled forgery or the real deal.

The unnamed owner of the piece had gotten it three years earlier at an estate sale in Massachusetts for $30. He’d made a career out of reselling, though it was clear to Schorer from the man’s home and cars that he hadn’t made it big yet and could use some cash.

It had formerly belonged to an architect in the area who’d inherited it from his grandfather, who’d bought it in Paris in 1919. According to the Post, they had thought it was a reproduction, too.

When the most recent owner spotted it at that estate sale, though, he saw Albrecht Dürer’s initials and while he thought it was probably a replica, he also found it to be “a wonderfully rendered piece of old art, which justified purchasing it,” according to the Boston Herald.

Schorer appeared to have the same opinion, and while the details of the exchange have not been made public, he offered the owner an advance of $100,000 for it and took it to London to be analyzed by renowned paper specialist Jane McAusland, who has worked with pieces from William Turner and Leonardo da Vinci.

“My own belief was my own foolishness,” he told the Post. “If it was not a drawing by Dürer, it would be worth a couple thousand dollars. But three days later I was on a flight to London. The [coach] seat next to mine was empty and I set the drawing down there.”

The first news was bad news. McAusland told him that, based on “false fox marks” (which are added to increase the aged appearance of a piece) and the presence of a modern adhesive on the back of the paper, the piece looked to be a fake.

Unconvinced, Shorer asked the specialist to clean the adhesive off and see if a beam of light through the cleaned paper would show a particular watermark that would identify the piece as genuine.

“There is a watermark known only to Albrecht Dürer drawings — a trident with a ring next to it,” Schorer explained. “That’s the symbol of Jakob Fugger, the richest man who ever lived. He controlled a large percentage of the European economy, plus copper and linen production, and was the financial backer of the Pope. He made the paper for Albrecht, who was his court artist.”

She found it. The drawing was really a Dürer piece.

Since then, the 500-year-old drawing — “The Virgin and Child with a Flower on a Grassy Bank” — has made the rounds at various galleries, and while there are no immediate plans to sell it, should an opportunity arise, the $30 will have been the investment of a lifetime.

“We believe it will be worth a record price,” Schorer said. “The speculation is that this will be at least $50 million.”

Continue reading: Discovery of A Lifetime: Man Buys Drawing For $30, Then Figures Out True Origin ...