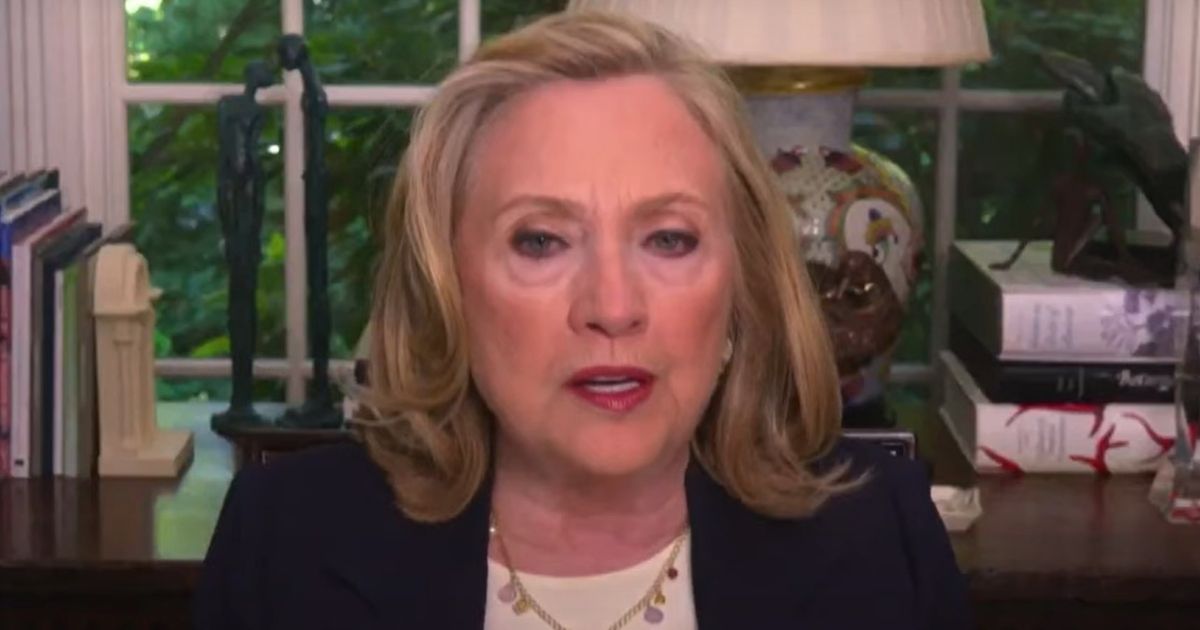 The following article, Crooked Hillary 2024? Clinton Raises Eyebrows with Potential Moves for Another Presidential Campaign, was first published on Flag And Cross.

As President Joe Biden’s poll numbers plunge amid the multiple crises he has inflamed with his reckless policies, speculation is mounting that the woman former President Donald Trump called “Crooked Hillary” might want to take another stab at the White House.

Clinton is opportunistically injecting herself into national politics amid talk that the 79-year-old Biden might not run for re-election in 2024, according to former Trump adviser Jason Miller, the CEO of social media platform Gettr.

“The fact of the matter is that Crooked is circling around Joe Biden almost like a buzzard looking at the carcass on the ground, saying, ‘It’s not going to be Joe Biden, it’s not going to be Kamala Harris. How can I go and insert myself into this national discussion and remind people that I’m still here?'” Miller said Thursday on Steven Bannon’s “War Room” podcast.

Clinton appears to be making a series of calculated moves to position herself for consideration as the Democratic Party’s 2024 presidential nominee.

Of course, the public never heard it because she lost to Trump — and then spent the next five years screeching that the election was rigged against her by “Russia, Russia, Russia!”

Miller suggested that Clinton was desperately trying to portray herself as emotional and approachable with fake tears to counter longstanding criticism that she’s robotic and unlikeable.

“Hillary’s trying to humanize herself and inject herself into the 2024 presidential discussion. That’s all it is,” Miller said on “War Room.” “Let’s just be brutally crass and direct about it.”

During last week’s “Today” show interview, Clinton also invoked Trump’s name — a surefire way to make headlines — by saying she believes he’ll run again, and that this is a grave threat to the country.

This is the same talking point that Democrats and their media puppets repeatedly spouted in the lead-up to the 2020 election — only to have the nation crumble once Biden got installed in the White House.

“If I were a betting person right now, I’d say Trump is going to run again,” Clinton said. “But I want people to understand that this is a make-or-break point.”

It’s interesting that she is ramping up a self-serving PR campaign as poll numbers for both Biden and his flailing vice president, Kamala Harris, are in freefall.

The situation has gotten so bad that White House press secretary Jen Psaki underscored that Biden does plan to run in 2024.

“The president has every intention of running for re-election,” Psaki said during Monday’s news briefing.

The fact that the White House felt compelled to say this speaks volumes about the utter disarray roiling this administration. It’s typically a foregone conclusion for a president in his first year to seek re-election.

But with Biden, nothing can be taken for granted — not merely because he’s 79 but because his nonstop stream of verbal blunders and humiliating gaffes have made his mental fitness a serious concern, with grave national security implications.

The VAST majority of Americans don’t want Biden to run again. I wonder why that is? Maybe because he’s not cognitively capable of running the country? He’s not up to the task, and he needs to GO!

why is anyone surprised that everything is falling apart under Biden?

this is the entirely predictable outcome of putting a totally talentless, completely corrupt, obviously senile machine politician in the White House

Four aides close to then-candidate Biden told Politico in December 2019 that it was “virtually inconceivable” that he would run for re-election in 2024.

“If Biden is elected,” a top campaign adviser said, “he’s going to be 82 years old in four years and he won’t be running for re-election.”

Even if he didn’t want to run again, Biden has no choice but to vehemently insist that he’ll seek re-election, because it would be political suicide for him to make himself a lame-duck president in his first year.

Instead, the Politico report said, Biden and his team had “settled on an alternative strategy: quietly indicating that he will almost certainly not run for a second term while declining to make a promise that he and his advisers fear could turn him into a lame duck and sap him of his political capital.”

As the nation collapses under this feckless regime, Biden’s implosion is good news for Clinton — who undoubtedly will be lurking in the shadows, waiting to pounce.