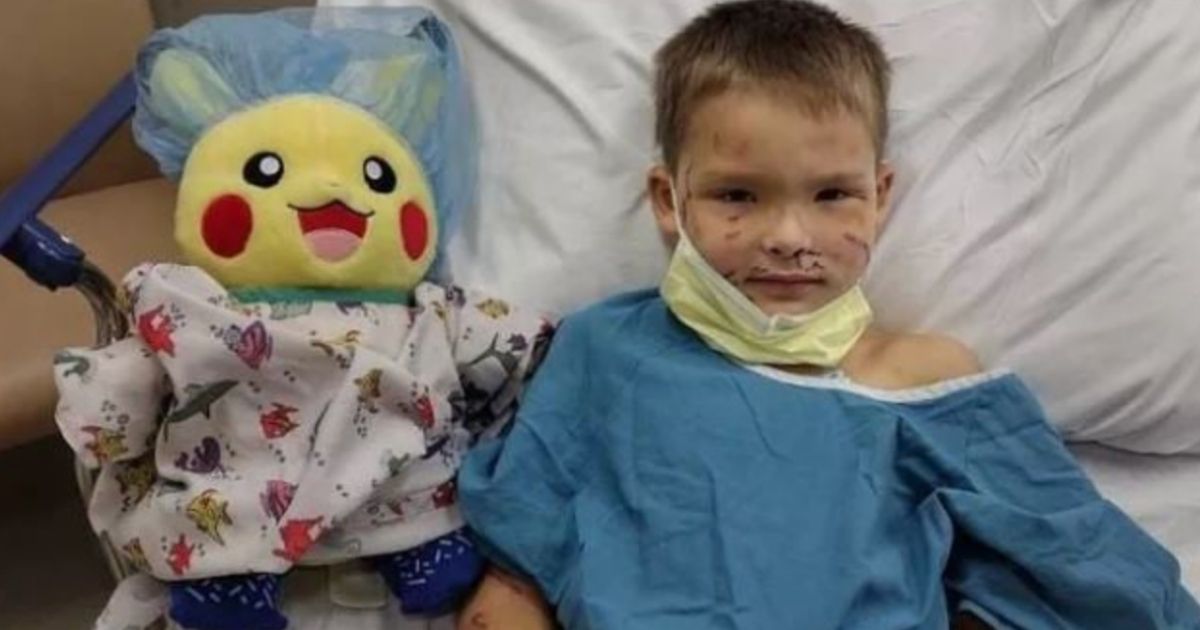 The following article, After Boy Survives Brutal Dog Mauling, Police Promise to Throw Him the ‘Best Christmas Ever’, was first published on Flag And Cross.

Oct. 13 has become a terrible date for the Heater family in White Lake Township, Michigan. On that day this year, their 9-year-old was attacked by two dogs and was severely injured.

Hunter was at a friend’s house, jumping on a trampoline, when the two dogs got out of their cages and attacked, according to a GoFundMe set up for the boy.

He was torn up from head to toe, his body was covered in 75 lacerations and his skull was fractured. He had to have 200 stitches and 40 staples. The severity of the situation was not lost on him.

The dogs “missed his jugular by less than 2 cm,” he had fluid on his brain, he’s experienced memory loss and he had to go to physical therapy to relearn how to walk.

The family has been left with a mountain of medical bills and a lot of healing to do, both physical and psychological.

“We haven’t fully processed them all, we are still receiving more and there is still more to come depending on his emotional … counseling and therapy,” dad Tyler Heater said of the bills.

Thankfully, family has stepped up and started a GoFundMe for the Heaters, raising over $23,000 to help with the costs associated with Hunter’s recovery.

Hunter is doing relatively well, considering the severity of his injuries, but this attack has the family financially and emotionally drained, and not exactly prepared to put on the Ritz this Christmas.

The White Lake Police Department has selected the family as the recipient of their annual Christmas giveaway, in whiche they “adopt” a family and bring Christmas to them.

“Christmas gifts, if they need assistance with food, we try to put together a whole Christmas dinner,” Lieutenant Matthew Ivory told WXYZ-TV, explaining what their gift would cover. “Any way we can help is what we do.

“Our biggest goal in adopting … them was to take the burden of Christmas and trying to give their family a Christmas in the wake of this tragedy, take that burden off of them so that they can focus on him and his recovery.

The police department announced their selection on Facebook, tying the fundraising aspect to their “No Shave November” event.

“The White Lake Police want to make this holiday season extra special for Hunter, his brother Mikey and their whole family, by giving them the ‘Best Christmas Ever!’ ” the post read.

“To make this happen, White Lake Police Officers are donating money to the cause and in return are allowed to grow beards throughout the new year. The public can join this cause by stopping in at the White Lake Township Police Department and purchasing a beard. For a $5.00 donation, you can purchase a beard, sign it, and stick on the wall in our lobby.” The department also included a PayPal link on the post for those interested in donating that way.

The gesture is certainly appreciated by the family — and especially the parents — who will be able to focus on one of their most important Christmas gifts: Their son.

“Honestly, having my son here is the best Christmas, but just helping with Christmas presents and being able to get our kids stuff that we probably would not be able to do right now, is huge,” Rachel said.