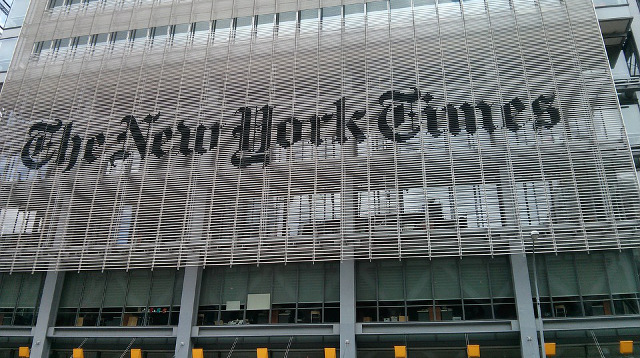 The following article, New York Times Turns on Biden, Begging Him Not to Run in 2024, was first published on Flag And Cross.

As sure as the sun rises in the east and sets in the west, the New York Times will align itself with the left side of the aisle.  The longtime progressive paper has been propping up Democratic administrations and agenda for decades now, and, up until this point, the Biden White House was no exception.

But the nation is swiftly shifting, seeing Joe Biden as a once-reluctant candidate-turned-ineffective Commander in Chief, and The Times is asking serious questions about whether or not he’s truly fit to run again in 2024.

New York Times columnist Bret Stephens on Tuesday implored President Biden to not seek reelection in 2024 and announce his intentions as soon as possible so potential Democratic contenders could begin making preparations to replace him.

In a piece headlined, “Biden Should Not Run Again — and He Should Say He Won’t,” Stephens, a conservative and strong critic of Donald Trump, argued that Biden’s age, as well as his seemingly “uneven” cognitive state, needed to be candidly discussed because it wasn’t healthy for him, his office, the Democratic Party, or the country to remain in limbo about what to do if he decides not to run.

Stephens also argued it would be “liberating” for Biden’s presidency if he announced he wouldn’t run, and that it would energize a currently “listless” Democratic Party.

He was brutal in his assessment.

“Is it a good idea for Joe Biden to run for reelection in 2024? And, if he runs again and wins, would it be good for the United States to have a president who is 86 — the age Biden would be at the end of a second term?” he wrote. “I put these questions bluntly because they need to be discussed candidly, not just whispered constantly.”

Stephens noted it was “fair game” for reporters to question former President Ronald Reagan’s age in the 1980s after he took office at the age of 69 and won reelection in his 70s, but that it had somehow become “horrible manners” to raise similar concerns about Biden, who turned 79 last month.

“It won’t do. From some of his public appearances, Biden seems … uneven. Often cogent, but sometimes alarmingly incoherent,” he wrote. “What’s the reason? I have no idea. Do his appearances (including the good ones) inspire strong confidence that the president can go the distance in his current term, to say nothing of the next? No.”

The suggestion arrives just weeks after White House Press Secretary Jen Psaki somewhat surprisingly suggested that Biden would definitely seek reelection, and just days after CNN went so far as to float a list of 11 potential replacements for Biden on the 2024 ticket.

Continue reading: New York Times Turns on Biden, Begging Him Not to Run in 2024 ...