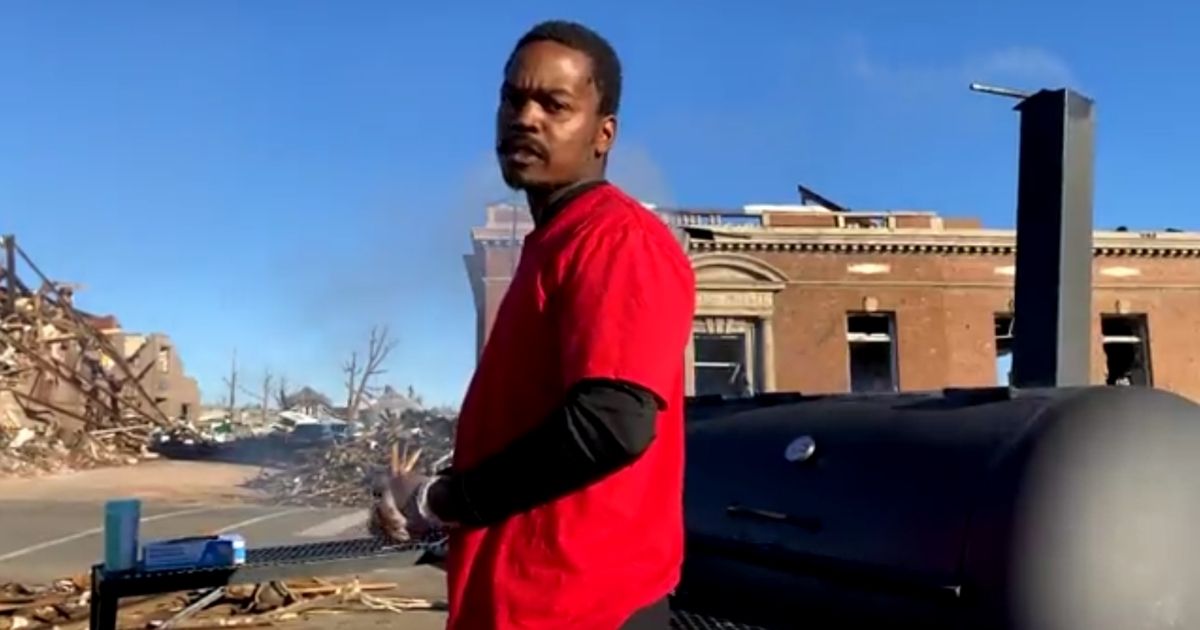 The following article, Man Shows Up in the Middle of Storm-Ravaged Kentucky with Grill and Truckload of Food, was first published on Flag And Cross.

The tornadoes that ravaged multiple states across the country over the weekend were undoubtedly a tragedy. At the same time, the community response has inspired hope amidst the damage.

Mayfield, Kentucky, was one city hit extremely hard by the natural disaster. When one man saw the destruction, he immediately jumped into action.

In a series of videos posted to Twitter, ABC News reporter Victor Ordoñez told the story of one good Samaritan named Jim Finch.

Ordoñez said Finch had driven 30 minutes “with a grill and a truckload of food” to help provide for people who had their homes and businesses destroyed by the storm.

“So I just figured I’d do what I can do, show up with some food and some water.”

This man drove half an hour with a grill and a truckload of food and parked right in the middle of #Mayfield, Kentucky. pic.twitter.com/xrVbrMdJ9S

In a second video, Ordoñez showed the destruction around the very area where Finch set up his grill.

“This was the scene right before Jim Finch, the man in the video, set up his grill,” Ordoñez explained. “There was later Church service in that parking lot across from him.”

This was the scene right before Jim Finch, the man in the video, set up his grill. There was later Church service in that parking lot across from him. pic.twitter.com/RQBvb2y1Ao

Finch said he was not trying to promote any sort of business. He just wanted to fill a need he saw during a difficult time.

“I got sausage, eggs, just a little simple stuff that you can have and not have to worry about making a mess,” Finch said. “You know, grab-and-go type of food.”

When Ordoñez asked if he had a restaurant, Finch replied, “No, sir. It just needed to be done.”

Jim wore a smile the whole morning, we laugh when I asked if he had a restaurant. He shook his head, “it just needed to be done,” he said. pic.twitter.com/tpZ1LMvdOA

In the same Kentucky town, First Christian Church of Mayfield saw a sign of God’s providence. While nearly its entire building was destroyed, an altar with a carving of Leonardo da Vinci’s “The Last Supper” remained unharmed.

“It’s the center of our worship experience,” senior minister Dr. Milton West told Today. “It survived along with a cross that sits on it.”

While the damage caused by the storm is undeniable, it is encouraging to see Mayfield citizens taking the opportunity to come together as a community during this time of healing.

Continue reading: Man Shows Up in the Middle of Storm-Ravaged Kentucky with Grill and Truckload of Food ...