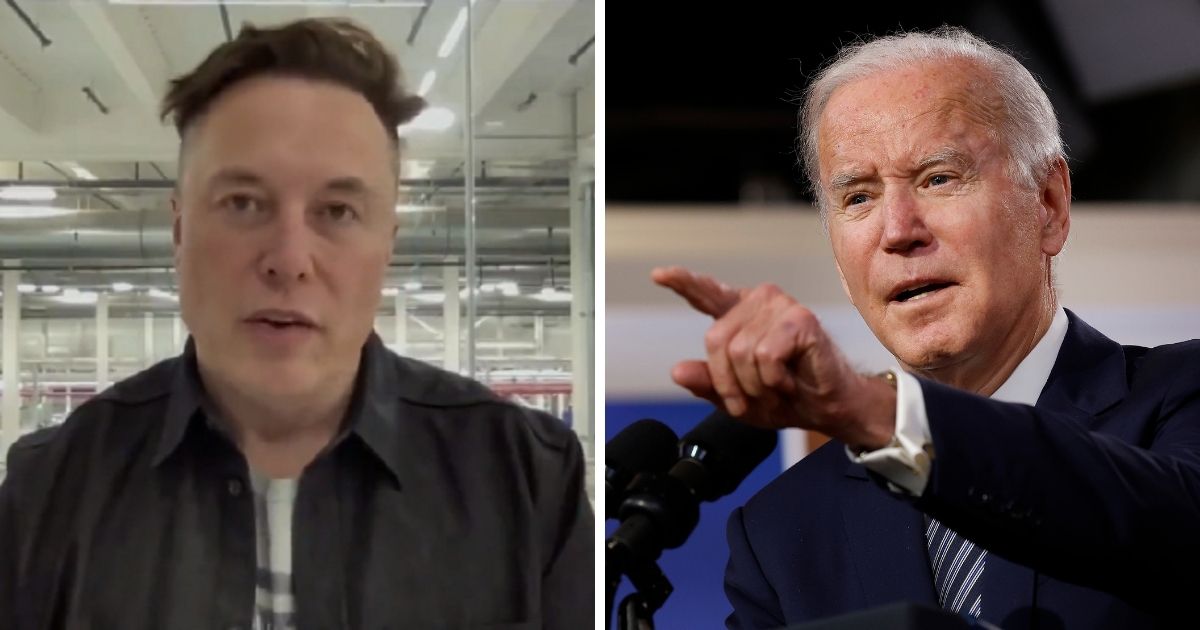 Elon Musk is a mixed bag for American conservatives.

Though the billionaire recently blasted Biden’s Build Back Better bill, the Los Angeles Times reported that Musk and his companies have received a total of $4.9 billion in government subsidies over the years that helped him build his empire.

Nevertheless, Musk now says funding for electric charging stations embedded in the Build Back Better bill are “unnecessary,” according to the The Washington Examiner. He went so far as to say the government should toss out the whole bill on the grounds that “the federal budget deficit is insane.”

“Honestly, it might be better if the bill doesn’t get passed … The federal budget deficit is insane” pic.twitter.com/awM8BzRanc

“Honestly, it might be better if the bill doesn’t get passed,” Musk said. “We’ve spent so much money, it’s like, the federal budget deficit is insane.”

Musk is not alone. Even Democratic Sens. Kyrsten Sinema of Arizona and Joe Manchin of West Virginia understand the legislation is economically unfeasible. Under intense party pressure to support the bill, neither of the senators has (to date) caved in.

The Build Back Better bill attempts to play to the usual feel-good causes, such as universal pre-K and expanded child tax credits. The problem with the utopian vision of the leftists is that it is disconnected from reality. The reality of the situation is the U.S. simply cannot afford the $2.2 trillion dollar legislation.

Though I’m not a professional economist, being from Wyoming I do have some common sense. The Build Back Better legislation looks like economic suicide to me.

But I’m no Elon Musk. Elon Musk is a smart guy. That’s simple enough to see. Biden should listen to him.

The New York Post reported that Musk sees the biggest threat to humanity as the declining birthrate.

“I think one of the biggest risks to civilization is the low birthrate and the rapidly declining birthrate,” Musk said Monday at the Wall Street Journal’s annual CEO Council.

“And yet, so many people, including smart people, think that there are too many people in the world and think that the population is growing out of control. It’s completely the opposite. Please look at the numbers — if people don’t have more children, civilization is going to crumble, mark my words.”

According to the World Bank, the global birthrate has been steadily declining since 1963. The U.S, birthrate dropped 4 percent in 2020, the lowest rate on record, according to the BBC.  According to the Brookings Institution, a liberal think tank, 2021 could see between 300,00 and 500,00 fewer births.

How did we get to this sorry state?

In a world where sexual relations between humans are transactional, traditional values are reduced to power and economics. and human minds are increasingly shaped not by human parents but machines and propaganda, it is not difficult to diagnose the root problem.

We have always lived in a broken world. There is no Golden Age in the past to which we can return. Neither can we tear down history and begin anew by creating a utopia through human means.

In “The City of God,” a masterpiece of Western civilization, St. Augustine marks the distinction between the “City of Man” and the City of God.” Men are not gods. Modern leaders seem to have forgotten that fact.

Humans cannot create reality; they can only influence it. Reality has borders just as nations do — if they are to remain nations.

The “City of Man” is built in the confines of reality. It cannot be otherwise. The Build Back Better bill knows no borders. Even Elon Musk, who would colonize Mars,  understands this.

As Jesus said: “Render therefore unto Caesar the things which are Caesar’s and unto God the things that are God’s.”

The root cause of our troubles, unless I’m way off base, is that we have all but forgotten the City of God.

We better remember very soon, or it may be too late.

“We’re running this incredible deficit, something’s got to give,” Musk said. “This can’t keep going.”

Let’s hope someone is listening.

The ONLY thing Biden has brought back better is the Taliban !