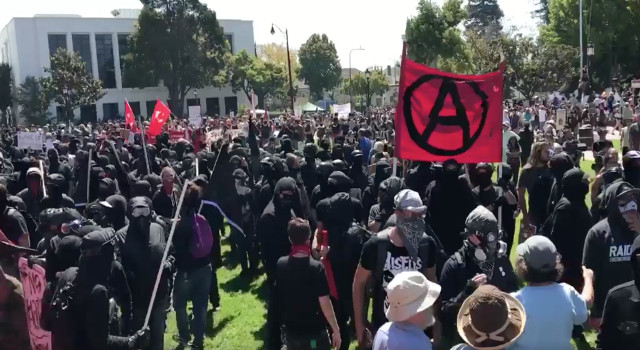 The following article, Report: Prosecutors Are Trying to Break Up a Network of US Antifa Cells for the First Time, was first published on Flag And Cross.

It’s one of the great paradoxes of the modern left. Antifa isn’t real, but it’s also an anti-fascist organization — and if you’re against people who call themselves anti-fascists, what does that say about you?

It’s not that the charade works particularly well, especially when organizations that openly advertise themselves as antifa — a contraction of “anti-fascist,” a particularly inapt descriptor — actually have websites with instructions on how to apply for membership. (We’ve been covering the very real threat posed by antifa for years here at The Western Journal — and you can join our fight to bring America the truth by subscribing.)

In California, of all places, the realities of antifa — the fact that it exists and that its members are indiscriminate hooligans — are coming home to roost. For the first time, a U.S. prosecutor is trying to break up a group of antifa cells with felony conspiracy and assault charges.

According to a Newsweek writeup by antifa chronicler Andy Ngô, the San Diego County district attorney’s office has charged 11 alleged antifa rioters on charges of beating up supporters of former President Donald Trump — along with other random individuals who happened to be in the vicinity — during a Jan. 9 fracas in Pacific Beach, California.

Search and arrest warrants for eight of the suspects were issued last week in Los Angeles and San Diego counties. Law enforcement seized guns and ammunition during the searches, in addition to body armor and drugs.

The antifa groups gathered to confront individuals protesting Trump’s loss in the 2020 election, with the counterprotesters carrying “shields, banners and signs displaying the antifa logo,” according to Ngô. The criminal complaint said they used social media to call for action against those attending the Trump rally in the days beforehand.

“ANTIFA is known to use force, fear, and violence to further their own interests and to suppress the interests of others,” the complaint read.

“This tactic is referred to as ‘Direct Action’ and is known to mean acts of violence such as assault, battery, assault with deadly weapons, arson, and vandalism. The alleged object of this conspiracy was to incite and participate in a riot using direct action tactics.”

“The Antifa-affiliated group surrounded several minors who they believed to be attending the Patriot March, sprayed them with mace and chased them up the boardwalk, shoving one of the minors to the ground. The minor was surrounded and beaten resulting in the minor victim being taken to the hospital to be treated for a concussion.”

Naming them in this threadpic.twitter.com/WvFmov6zMl

It wasn’t just the pro-Trump protesters who suffered antifa’s wrath, either. Local photographer John Cocozza said he was attacked by members of the left-wing mob.

“Police were standing 40 feet away and did nothing,” Cocozza said. He said he sustained bruising on his back when one of the rioters hit him with a wooden stick. “That guy was aiming for my head. I saw him coming and I turned at the last moment.”

The scheduled Trump rally in Pacific Beach had not even started when Antifa members attacked people, said John Cocozza, a victim of Antifa attacks that day in PB.

“That’s one of the main things the news media got wrong,” Cocozza added.

The thuggery was not coming from both sides.

“Video evidence analysis shows that overwhelmingly the violence in this incident was perpetrated by the Antifa affiliates and was not a mutual fray with both sides crossing out of lawful First Amendment expression into riot and violence,” District Attorney Summer Stephan’s office said in a news release, according to the San Diego Union-Tribune.

Eight of the 11 antifa suspects were arraigned in court this week. All of them pleaded not guilty.

Amazingly, this occasioned a few liberal blue checks to take to Twitter and loudly insist that antifa isn’t real. These included Shane Burley (author of “Fascism Today” and “Why We Fight: Essays on Fascism, Resistance, and Surviving the Apocalypse”), left-wing journalist Jordan Chariton and actress Tina-Desiree Berg:

Obviously this headline and article are absurd, but so is this move to state repression, to take a right-wing fantasy about what antifa is and then to build a case around it. This is a dangerous precedent. https://t.co/QrO2F3Vy75

Antifa isn’t like Tinkerbell: It doesn’t stop existing if you don’t give it attention.

Again, if antifa cells aren’t real, someone should point this out to Portland’s own Rose City Antifa — which, as Ngô noted, has a recruitment page on its website.

Portland’s antifa cell has a website (Rose City Antifa) and a section where they talk about how to become a member. https://t.co/WQHROjKN0m pic.twitter.com/jfg4OhejtJ

But again — not a real thing! Don’t pay attention to it. Also, “antifa” means “anti-fascist” — so if you’re anti-anti-fascist, what does that really make you?

It makes you someone who believes freedom of speech should be free of the thug’s veto, that’s what.

Continue reading: Report: Prosecutors Are Trying to Break Up a Network of US Antifa Cells for the First Time ...