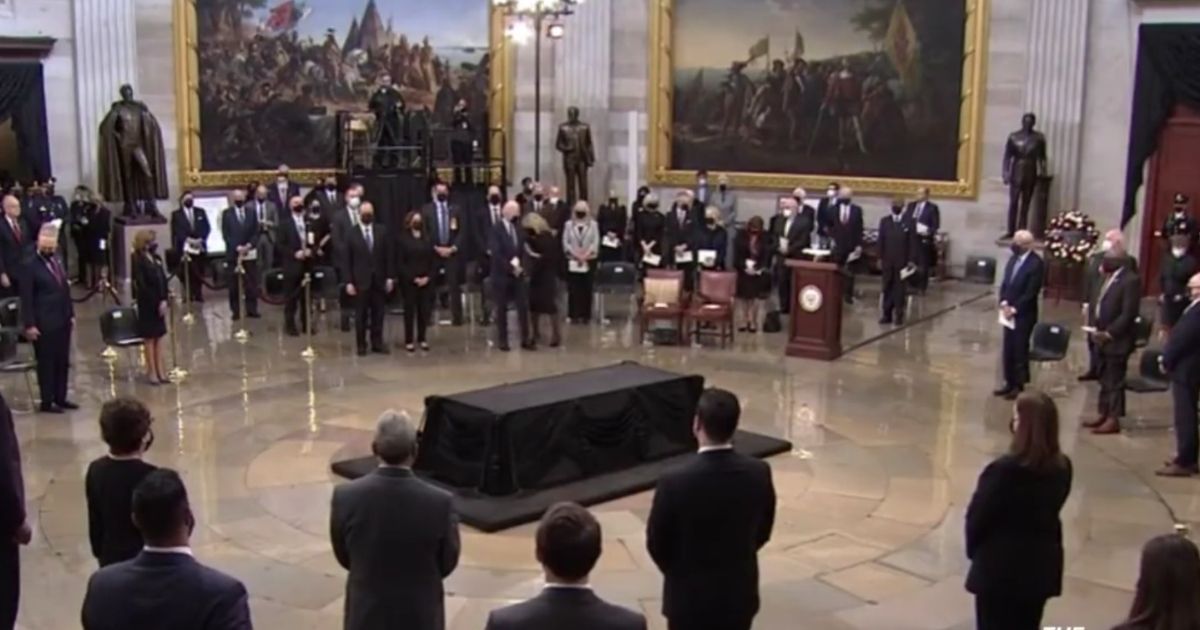 The following article, Watch: Joe Biden Asks Jill Biden to Switch Seats So He Doesn’t Have to Sit Next to VP Harris, was first published on Flag And Cross.

Throughout the past few weeks, multiple reports have alleged tension between President Joe Biden and Vice President Kamala Harris. An awkward interaction between the two on Thursday will certainly not quell those concerns.

According to CNN, Biden and Harris were among many politicians in attendance at the United States Capitol on Thursday. They were there to honor former Senate majority leader and Republican presidential nominee Bob Dole, who died Sunday.

Harris arrived before Biden and found her way to her designated chair with her husband, Doug Emhoff. Afterward, Biden entered the room with his wife Jill Biden and the uncomfortable exchange commenced.

As Biden walked past Harris, he appeared to purposefully avoid eye contact with her.

Once Biden found his seat, he continued to ignore Harris, who stared straight ahead awkwardly. Biden then turned to talk to his wife, Jill.

After the camera cut to a wide shot, Biden could be seen moving toward his wife. The two eventually switched seats, setting Biden further away from Harris.

Benny Johnson, host of “The Benny Show,” posted a video of the interaction on Twitter.

AWKWARD, SHADE WAR:
Joe Biden Refuses to acknowledge Kamala as he walks right past her in US Capitol. Then Joe asks Jill to SWITCH SEATS so he won’t be close to VP. Neither make eye contact as Joe looks AT THE CEILING and Kamala looks at the floor.

CRINGE. See for yourself: pic.twitter.com/urCVJOq8Qa

Since it is unclear what Biden is saying in the footage, it would be impossible to prove that he switched seats to get away from Harris. However, the video sure makes the two look like they do not want to be near one another.

Even if Biden’s intention was not to avoid his vice president, the optics are terrible in light of recent events.

According to a separate article from CNN in November, Biden staffers were growing tired of “entrenched dysfunction and lack of focus” from Harris and her staff.

Harris staffers told CNN that the vice president was “not being adequately prepared or positioned” by Biden and his staff.

“It is natural that those of us who know her know how much more helpful she can be than she is currently being asked to be,” California lieutenant governor Eleni Kounalakis said. “That’s where the frustration is coming from.”

After the report, Harris went on ABC News for a one-on-one interview with “Good Morning America” co-host George Stephanopoulos.

“We’re getting things done, and we’re doing it together,” Harris said. She added that she did not feel she was being underused, but she never fully denied the reports of tension with Biden.

“That should have been an easy interview for her,” he said. “I mean, Stephanopoulos — he’s a hardcore Democrat. That’s where you go to clean things up, and she couldn’t even do that.”

As rumors about Biden and Harris continue to abound, they are not helping themselves with their awkward interactions in public.

Continue reading: Watch: Joe Biden Asks Jill Biden to Switch Seats So He Doesn’t Have to Sit Next to VP Harris ...