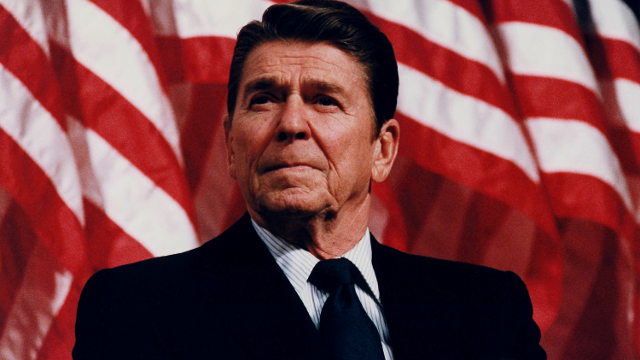 The following article, Watch: In 1984, Reagan Predicted Biden’s Build Back Better Debacle, But America Didn’t Listen, was first published on Flag And Cross.

Then-President Ronald Reagan was prescient in 1984 when he predicted what the Democrats would do if they ever regained the full levers of power in Washington again.

And pretty much everything he foresaw, President Joe Biden and the Democrats are working to implement.

When the 40th president took office in January 1981, the nation was entering its steepest recession since World War II, with unemployment hitting nearly 11 percent shortly into his first term.

Reagan’s landslide victory in the 1980 election really came in response to Democratic President Lyndon Johnson’s “Great Society” of the 1960s, which had led to the economic stagnation and overall malaise of the 1970s.

Both inflation and interest rates hit double digits by the end of the decade.

President Jimmy Carter perfectly encapsulated the American mood at the time under the weight of big government programs, regulations and high taxes in his “Crisis of Confidence” speech in July 1979.

“The symptoms of this crisis of the American spirit are all around us. For the first time in the history of our country, a majority of our people believe that the next five years will be worse than the past five years,” he said.

In his first inaugural address, Reagan proclaimed, “In this present crisis, government is not the solution to our problem; government is the problem.”

“It is time to reawaken this industrial giant, to get government back within its means, and to lighten our punitive tax burden. And these will be our first priorities, and on these principles, there will be no compromise,” he added.

And that’s what Reagan did, slashing the top marginal individual tax rate during the course of his presidency from 70 percent to 28 percent and the top corporate rate from 48 percent to 34 percent.

The policies worked like a charm, with the American economy experiencing its greatest expansion since World War II and creating 18 million jobs.

Reagan warned when he was running for re-election in 1984 under the theme “Morning in America” what the Democrats would do if they ever took back the levers of power in Washington, and it is, in fact, what Biden and the Democrats are trying to do right now.

“Is there any doubt that they will raise our taxes?” he asked, to which the crowd at the Republican National Convention in Dallas, yelled, “No!”

Reagan continued with a series of questions that elicited the same response.

“Cut back our defense preparedness? Raise interest rates? Make unilateral and unwise concessions to the Soviet Union? And they’ll do all that in the name of compassion.

“It’s what they’ve done to America in the past. But if we do our job right, they won’t be able to do it again.”

Build Back Better and the nearly $2 trillion American Rescue Plan, passed earlier this year, represent the very policies Reagan identified as destructive to the American economy.

The House version of Build Back Better, passed last month, increases various taxes on businesses and investments, including a new minimum corporate income tax, that would disincentivize companies from growing and creating new jobs, according to the nonpartisan Tax Foundation.

Further, millions of Americans, including many in the middle class, will see their individual tax bills go up.

All the trillions of dollars in spending have led to the highest inflation rate the nation has experienced in over 30 years.

The New York Times reported that the single most expensive piece of the legislation sets aside $555 billion for climate change programs and new regulations.

The budget deficit hit $2.77 trillion in fiscal 2021, the second-highest in U.S. history behind 2020, when both Republicans and Democrats passed trillions in COVID relief.

No Republican signed on to the American Rescue Plan earlier this year because so little of it actually had to do with COVID.

Instead, it extended enhanced jobless benefits through September and created a significantly elevated $3,600 per child, per year tax credit, which went out to parents’ bank accounts in $300 payments for each child per month.

Democrats continued the latter program in Build Back Better.

The Congressional Budget Office scored the Biden plan last month and found it would add $367 billion to the deficit between 2022 and 2031, CNBC reported.

The Democrats’ bill also relies on budget tricks such as only funding the child tax credit increase through 2022, knowing full well if they launch the entitlement, it will be politically difficult to stop it. In other words, the final price tag for the new programs will be much higher.

Because of the spending coming out of D.C., the Federal Reserve will likely be forced to raise rates in order to tamp down inflation, according to MarketWatch.

Cut back on our defense preparedness, check.

Unilateral concessions made to the Soviet Union, now Russia, check.

Biden greenlit the Nord Stream II gas pipeline into Europe after Trump had put the threat of sanctions in place to stop it.

Further, The Wall Street Journal reported in August that Russian President Vladimir Putin informed Biden at their Geneva summit in June that he opposed the U.S. setting up a base in Central Asia nations such as Uzbekistan, Kyrgyzstan and Tajikistan to replace the military and intelligence gathering capabilities lost when the U.S. surrendered the Bagram airbase in Afghanistan to the Taliban.

The Russian leader added that China would also be against such a move, and Biden apparently acquiesced to Putin’s wishes.

So that’s pretty much a clean sweep.

Biden, through his Build Back Better legislation and other policy decisions, is fulfilling everything Reagan predicted in 1984 that Democrats would do if given the reins of power.

Even “1984” author George Orwell likely would have been impressed with Reagan’s prescience.