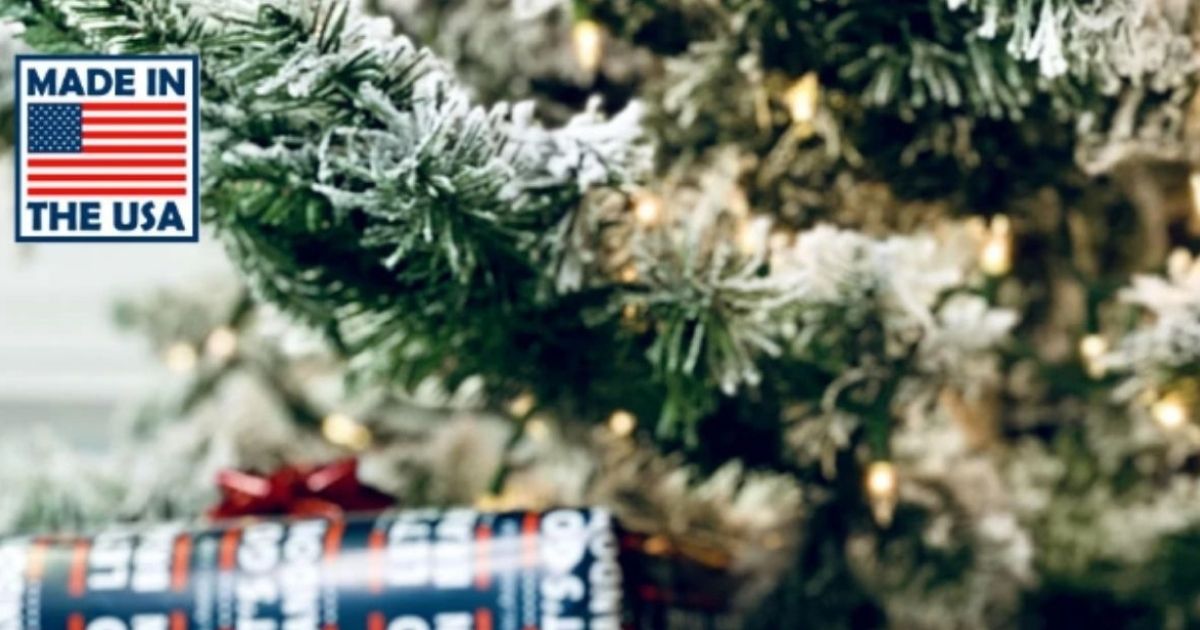 The following article, Company Working 24/7 as This Novelty ‘Let’s Go Brandon’ Wrapping Paper Flies off Shelves, was first published on Flag And Cross.

A conservative apparel and accessories company is working overtime this holiday season, thanks to the staggering unpopularity of President Joe Biden, whose catastrophic policies have ravaged the nation.

Bring Ammo, which rolled out its anti-Biden “Let’s Go Brandon” wrapping paper in mid-November, said orders have skyrocketed during the past four weeks.

“We’ve never seen anything like this, thanks Joe!” Bring Ammo founder Seth Weathers said in a news release.

Weathers, a GOP political strategist, said the comical wrapping paper started out as a joke, but then quickly snowballed into an unexpected trend.

The demand has been so off-the-charts that it’s keeping a family-owned Georgia print facility busy around the clock, Weathers said.

This is not the first time that Bring Ammo unveiled a viral product. Several months ago, the company launched a “Fauci the Clown” T-shirt.

“We’re having fun with the snowflakes and we’re putting money in our local community, that makes for a very Merry Conservative Christmas,” Weathers said.

Happy customers shared photos of their “Let’s Go Brandon” wrapping paper and other merchandise on Twitter.

A female Trump supporter tweeted: “Best part? It’s made in the USA!”

Be legendary this Christmas with Let’s Go Brandon Wrapping Paper!

Best part? It’s made in the USA! pic.twitter.com/Q4KRLNwAWs

One guy joked that his wife wouldn’t let him put a “Let’s Go Brandon” ornament on their Christmas tree, so he proudly displayed it on his end table.

Wife wouldn’t let me put on the good tree. pic.twitter.com/qhbMyRzVx1

One lady said her parents love the “Let’s Go Brandon” ornament so much that they hang it on their chandelier, “to be sure everyone can see it.”

Thank you @BringAmmo ! My parents favorite ornament! They wanted to be sure everyone can see it…that silly Christmas tree just wasn’t a good enough display!

The slogan became a viral nationwide trend in October after an NBC reporter disingenuously described the chant “F*** Joe Biden!” emanating from the crowd at a NASCAR race as “Let’s Go Brandon.”

At the time, the reporter was interviewing NASCAR champ Brandon Brown.

Crowd chants “#FJoeBiden” at #NASCAR during an interview; the reporter tries to play it off as“Let’s go Brandon”

The mantra quickly became a popular meme and has since been chanted at countless college football games and other events.

The trend continues! Chants and signs of “Let’s go Brandon!” have joined the trend of “F*** Joe Biden!” chants across college stadiums. pic.twitter.com/ayVi3dIFAT

The hilarious mantra even spawned a No. 1 iTunes song.

The startling popularity of the chant underscores how deeply unpopular Biden is — and his plunging approval ratings affirm this.

From his Afghanistan disaster to the border crisis to raging inflation to terrifying crime waves roiling the nation, Biden has been an epic failure.