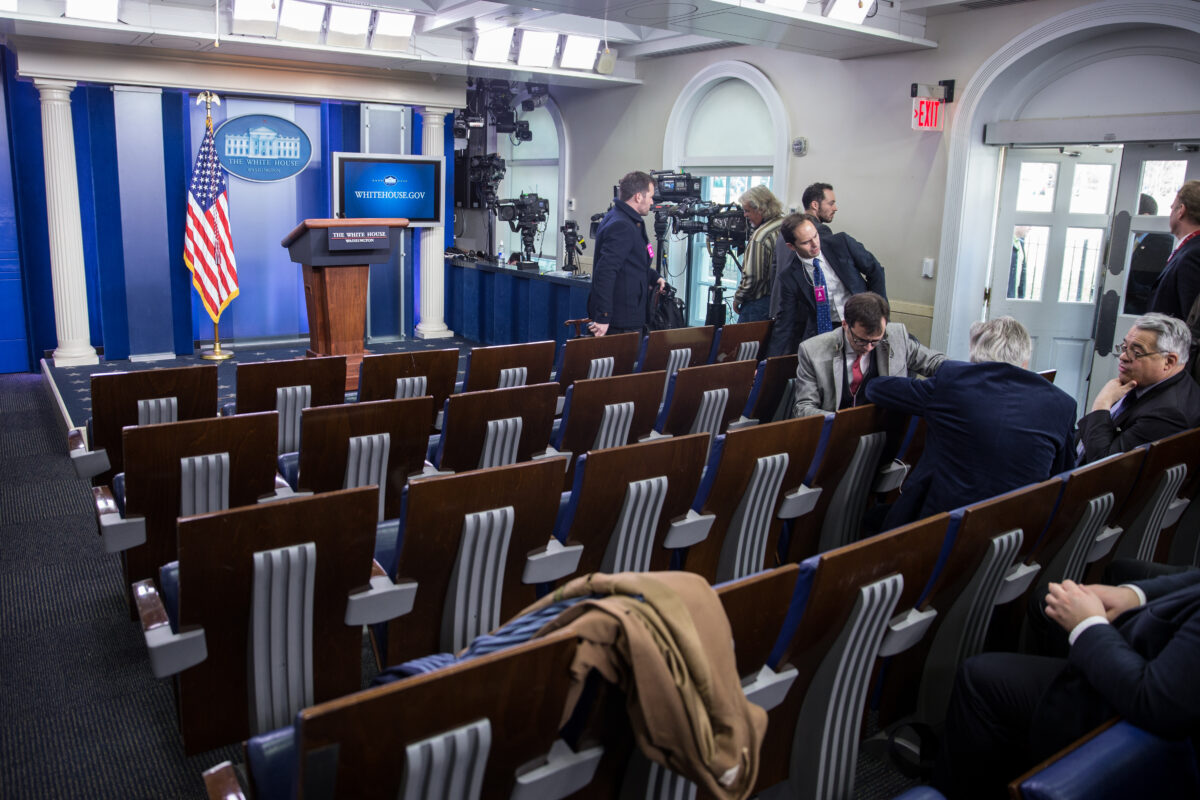 The following article, Biden Blasts Elevator Music to Drown Out Shouting Reporters as He Walks Off Fake White House Set, was first published on Flag And Cross.

President Joe Biden has grown notorious for his staff’s efforts to shield him from the media.

Even the overly friendly mainstream media has grown annoyed that access to the 2020 election’s conquering progressive hero has been severely limited, at best.

Biden, who has set the record as the oldest sitting president in U.S. history, also set the embarrassing record of the longest a sitting U.S. president had gone without giving a solo news conference in a century.

Since then, his handlers still keep him on a very tight leash. Whether it’s herding reporters away from the president if questions get too tough or, as rumor has it, enacting a special protocol called “the wall” to shield him from the prying eyes of the free press, Biden’s interactions with media are very carefully mitigated.

Now, it appears, they’ve added a new trick to their repertoire.

They’re just blasting elevator music over the probing questions of nosy reporters who won’t take “thanks everyone, that’s it for today” as an answer.

It sort of reminds you of how the Academy Awards producers will let the music swell to nudge long-winded actors off the stage, only for reporters.

As noted, this most certainly isn’t the first time that the Biden team has employed rather underhanded tactics to shelter the president from reporters.

Here are some of their other tactics:

President Biden ignores shouted questions from reporters about whether there is a crisis at the border.

His staff shoos them away. pic.twitter.com/La8TCfAetf

Biden laughs as he has his staff herd away reporters shouting questions about Afghanistan and the 13 US service members who faced death at the hands of terrorists yesterday.

It’s also worth noting that Biden has indicated he’s been given important instructions for how many questions he’s allowed to take when his handlers do loosen the leash a bit, under apparent threat of punishment if he doesn’t comply:

Reporters just yelled questions at Biden as he was leaving. He wasn’t planning on taking any and then he turned around:

“I’m sorry, this is the last question I will take. Then, I’m really going to be in trouble.”

Who is he in trouble with???? pic.twitter.com/h3FAXvw7cj

This is pretty much what we’ve come to expect from the Biden administration, which is really quite unsettling.

Former President Donald Trump’s rhetoric about how the “fake news is the enemy of the people” let members of the media canonize themselves for years on end.

Yet now, it’s quite noteworthy that while the former president never shied away from speaking to reporters — far from it — Biden himself, undoubtedly the media’s choice in 2020, doesn’t want to talk to his supposedly adoring public.