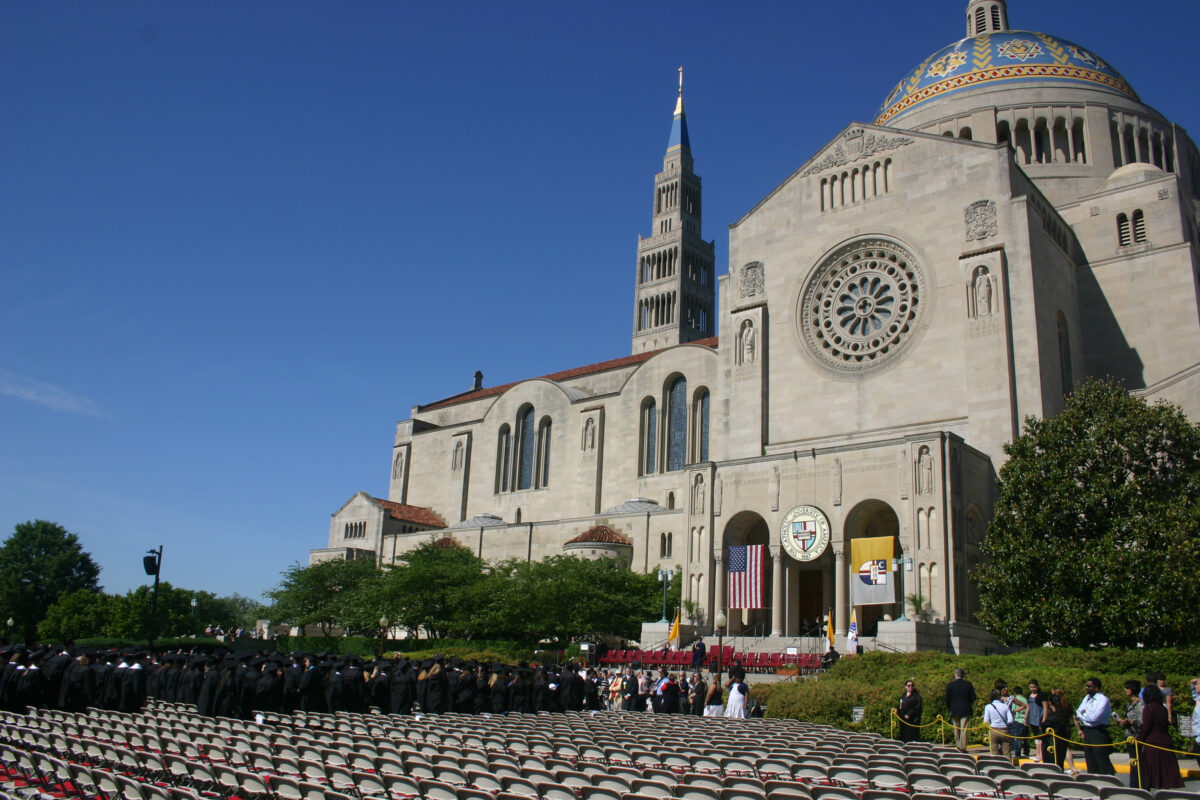 An icon at the Catholic University of America that puts a George Floyd-like character in the place of Jesus Christ has drawn the ire of students.

The college unveiled the icon as part of its Black History Month celebrations, according to a news release, noting that “The icon, Kelly Latimore’s ‘Mama,’ was created following the death of George Floyd and is evocative of the Pieta — a mother mourning her son.”

The college, which calls itself the pontifical university of the Catholic Church in the United States, has two copies of the icon on display – one in its campus ministry office and the other outside the chapel at its law school, according to The Daily Wire, which quoted a student it did not name as saying, “to put up something clearly blasphemous defeats the mission of the university.”

Karna Lozoya, vice president for university communications, told The Daily Signal, “You can identify Jesus by the marks in the halo.”

“It is just another symptom of the liberalization and secularization of our campus.” https://t.co/EkJtP229tw

In an interview with The Christian Century, artist Kelly Latimore made it clear that the icon was driven by Floyd.

“It was commissioned by my partner Evie Schoenherr as a way to mourn George Floyd,” he said, later speaking about “God being present in the dead black body.”

“The common question that people asked was, ‘Is it George Floyd or Jesus?’ The fact they’re asking that question is part of the problem. My answer was yes. This non-answer frustrated the hell out of a lot of people,” he said.

Blayne Clegg, a junior at the college, told Fox News there was no question in his mind that the icon is not appropriate.

“There’s a fine line between recognizing the innate dignity and righteousness of human beings that are made in the image of God and embracing brazen, progressive politics,” Clegg said. “I haven’t found anybody who’s been able to give a serious theological justification for this kind of heretical, blasphemous idolatry.”

“Jesus has been depicted as many different races, but Jesus is always depicted as nothing but Jesus, the sinless son of Almighty God,” Clegg said. “There has never, to my knowledge, been any serious, respected Catholic theologian or icon maker who has depicted Jesus Christ as another human being.”

“It’s hard to imagine that progressive politics could be fully embraced by university faculty and staff and administrators at the Catholic University of America,” he said.

A college spokesperson tried to blunt the anger.

“The icon ‘Mama’ is a pieta depicting Mary and her Son, Jesus Christ. The letters in the halo are Ὁ ὬΝ, which is shorthand in Greek for ‘I Am.’ The letters are used in icons only in connection with Jesus Christ, the Son of God,” the school said in a statement to Fox.

“There are those who would like to see George Floyd as the male figure in the icon. That is not how we read it. The image represents to our community a good-faith attempt to include religious imagery on campus that reflects the universality of the Catholic Church.”

But for many, the verdict is in. A petition on Change.org is calling for the painting to be removed. As of Tuesday night, the petition had 1,088 signatures.

“We are asking through this petition that the University’s administration remove these images from public display on our campus, as we believe they are disrespectful, and sacrilegious,” petition organizers wrote.

“As students at the Catholic University of America, we believe that it is extremely grave that our university, the official university of the Catholic Church in North America, would cast another in the image of our Lord in this way, particularly for political purposes,” it said.

“No political or social cause ever justifies depicting another in the place of Jesus Christ,” the petition said.