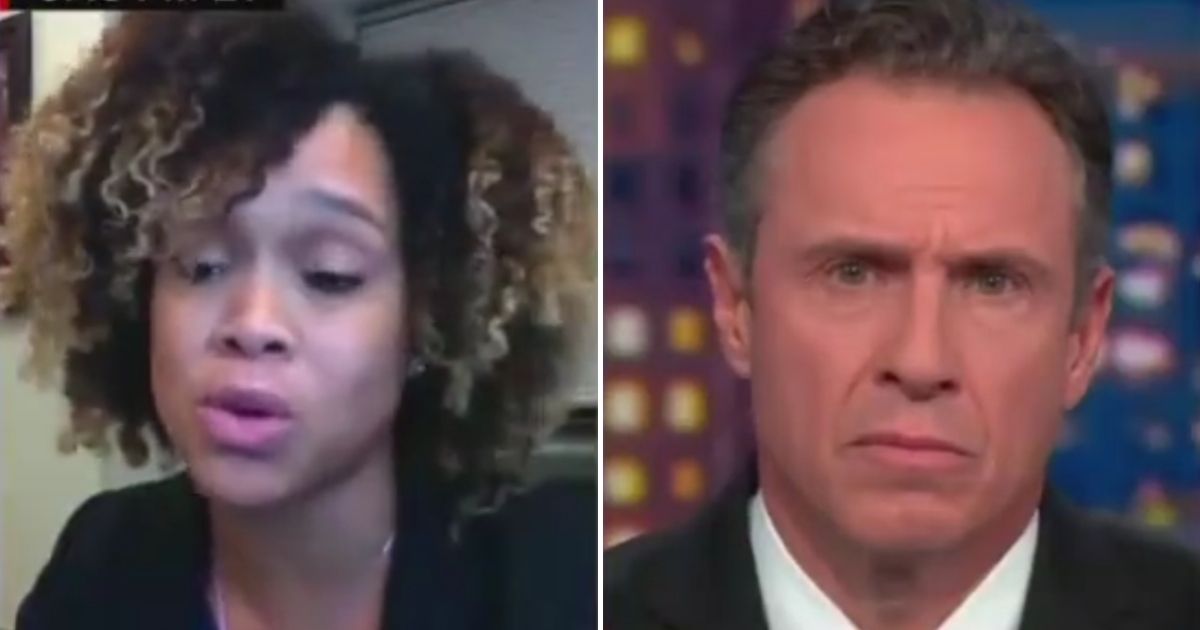 The following article, Watch: CNN Guest Defends Rosenbaum, Brushes off His Usage of the N-Word, was first published on Flag And Cross.

Baltimore State’s Attorney Marilyn Mosby joined Chris Cuomo for his prime-time CNN program on Friday night — as the left was angrily digesting the verdict in the Kyle Rittenhouse case — to argue for why the prosecution shouldn’t have admitted that one of the men Rittenhouse shot was behaving in a violent, criminal manner that evening.

Oh, and she also accused “this white boy,” Kyle Rittenhouse, of pretending to show remorse on the stand.

Yup. This is real life.

Rittenhouse was found innocent on all charges on Friday, having been accused of reckless homicide and attempted reckless homicide when he shot three men, killing two, during riots in Kenosha, Wisconsin, last year.

Mosby cynically cried foul. Amazingly, she did so by willingly mentioning that the first man Rittenhouse shot, Joseph Rosenbaum, had not only been belligerently violent that evening, but that he’d used a racial slur ahead of his interaction with Rittenhouse. She indicated she not only thinks wasn’t a big deal, but that it was wrong to mention this in court in the first place. Rosenbaum, by the way, was also a convicted child sex offender.

While Mosby doesn’t think that his use of the N-word or criminality should have been acknowledged by the prosecution, she does think that the color of Rittenhouse’s skin indicates that the verdict was a farce.

She also accused Rittenhouse of a “disingenuous” display of emotion on the stand when the 18-year-old, who was 17 at the time of the shooting, broke down in sobs while describing what happened.

“What I can tell you is that this verdict is really not surprising,” Mosby said to Cuomo. “I mean, at the end of the day when we look at it from a legal perspective, we have this young white boy, who went on the stand in a disingenuous emotional state, they did this, it was an effective defense strategy, right?”

Beyond parody: Baltimore State’s Attorney Marilyn Mosby asserts that Rittenhouse is racist but rushes off Rosenbaum using the N-word. She also argues the prosecution should have not admitted that to the jury, nor his arson and threatening behavior that night. pic.twitter.com/RzUU5LQlyv

“To ensure that these folks, seven white women, four white men, one Hispanic man, that would innately sympathize with this young white boy who was, according to the defense, left with no other choice but to defend himself from the scary Black Lives Matter rioters and looters attempting to attack him,” she continued.

It is a scary thing for a state’s attorney to tell us what was in the heart and mind of this young man when he took the stand.

This woman is the city of Baltimore’s top prosecutor, and she thinks she has the authority to determine whether an accused man is sincere or not when he displays signs that the circumstances under which the accused crime was committed caused trauma and emotional distress for him?

And, what’s more, that her doubt that his emotions were sincere should be taken into account when determining whether the jury arrived at the correct conclusion about his innocence?

That’s not all. Mosby goes on to essentially argue that the prosecution should have made sure to obscure the fact that Rosenbaum was engaged in criminal activity that night and used racial slurs; in essence, she would have preferred the prosecution paint him as something he was not. But she indicates that Rittenhouse, on the other hand, was only let off because he was white.

This should alarm and concern you, at best. Do you want to live in a country where the government’s opinion on whether you’re being genuine or not on the stand is taken into account during a trial? I most certainly don’t, and neither should anyone in this country, regardless of race, creed or political party.

“I think the greater question, just from a prosecutorial perspective, Chris, what was surprising to me was the prosecutor’s approach, and not just villainizing, but criminalizing the first victim in this case,” Mosby said.

“I don’t think it was effective for the prosecutor to tell the jurors that this victim tipped over an empty port-a-potty, swung a chain, lit a metal garbage dumpster on fire or used the N-word and most disturbingly, that if the victim were alive today that he’d be prosecuted for arson,” she continued.

“And so, while I can appreciate that the prosecutor was attempting to emphasize that vigilante … execution is unacceptable, what I think that he inadvertently did was to provide validity to Kyle Rittenhouse’s self-defense claim, which in my opinion, undermined the entirety of the prosecution’s case which was rested upon the fact that Kyle Rittenhouse was the provocateur, and was not entitled to self-defense.

“So by villainizing and criminalizing the dead victim, the jury was able to disassociate the criminal acts of the victim, who wasn’t able to be present, and sympathize with the killer expressing remorse in their presence,” she concluded triumphantly.

Bear in mind, Mosby willingly offered up the insight that the prosecution had pointed to Rosenbaum’s use of a racial slur, which only further undermines her argument that he was in any way sympathetic.

She also went out of her way to tie Rosenbaum to the whole cause of Black Lives Matter. Why?

This was perhaps the only way to politicize the Rittenhouse verdict in the progressive left’s favor, which is why it’s such a flimsy case. If Rosenbaum can’t be seen as sympathetic, they can’t make the Rittenhouse case about race and social justice, which it’s not.

Just like Mosby accused the prosecutor of doing, she has unwittingly made her own case weaker and even more laughable by comparison, in addition to her highly concerning disregard for the merits of the justice system in which she herself serves.

Of course, nothing was more laughable than the reaction from Cuomo, who listened in passionate earnest to her disturbing and outlandish comments, clearly sympathetic as she offered up her dumpster fire of a hot take on the verdict.

“You make a strong point,” the host said at the conclusion of her comments.

And that, my friends, is everything wrong with the progressive leftist media establishment in a single clip.