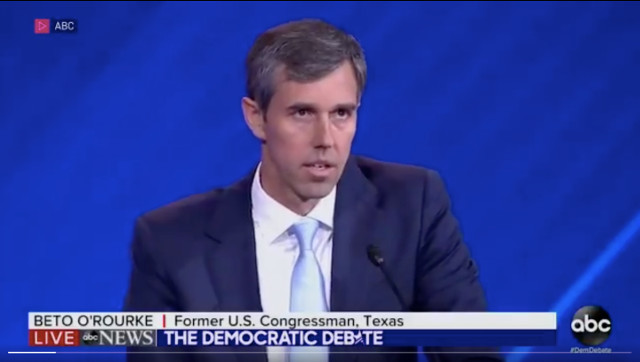 The following article, Twice-Beaten Beto Says He Wants Toxic Biden to Stay Away from His Gov Race in 2022, was first published on Flag And Cross.

Beto O’Rourke is officially running for governor of Texas, but has made it clear that he wants President Joe Biden to not interfere in his campaign.

CNN asked O’Rourke in an interview, “Would you like the president to come and campaign with you?”

“I’m focused on Texas and on my fellow Texans. Those are the people most important to me. There’s no politician, there’s no other person from outside of this state who can help to change the course of this election, for better or for worse,” he added.

O’Rourke is already fighting the odds as a Democrat in Texas. He was beaten by Texas Republican Ted Cruz in 2018 for the U.S. Senate seat. He then had a brief run as a 2020 presidential candidate, but dropped out in November 2019.

His decision to steer clear of Biden comes as no surprise since the president’s approval ratings have been plummeting and Biden’s support did little to help gubernatorial candidate Terry McAuliffe, who, earlier this month, lost to Republican contender Glenn Youngkin in Virginia.

“58% of Americans say President Joe Biden hasn’t paid enough attention to the nation’s most important problems, as a majority disapproves of the way he’s handling his job as President,” CNN reported on Nov. 8, after releasing a poll.

CNN’s poll also outlined that 36 percent of Americans are concerned about the economy, and, among that group, 72 percent think Biden has neglected the important issues. Nearly 6 out of 10 also said that they did not think Biden had the right priorities.

Though Biden’s polling numbers nationally are suffering, in Texas, he’s even more widely disapproved of.

According to the latest Texas Tribune/University of Texas poll, only 35 percent of Texans approve of how Biden is handling the presidency, with 55 percent disapproving.

One major issue that Biden is suffering from in Texas is immigration. Being a border state with constant immigration problems, this has always been an important issue to Texans.

Daron Shaw, a University of Texas at Austin professor, pointed to polling that showed Biden exceptionally weak on border security and immigration as a cause for his decline in Texas popularity.

Only 22 percent of Texans approved of his handling border and immigration issues, and 63 percent disapprove.

“It’s emblematic of the notion that the Biden administration is tone deaf and doesn’t really get the problem and is kind of floundering around,” Shaw told the Texas Tribune.

O’Rourke’s hesitancy toward Biden’s interference is natural since O’Rourke himself is already not polling very well.

As a poll from the Dallas Morning News and University of Texas at Tyler shows, Abbott is clearly favored by voters. Forty-five percent said they would vote for Abbott, only 39 percent for O’Rourke and 16 percent would vote from someone else.

O’Rourke is even less favored than actor Matthew McConaughey, who is very much a hypothetical candidate at this point.

O’Rourke faces a tough fight in Texas. Texas is not known for being supportive of members of his party, so it will be an uphill battle for the twice-beaten Democrat.

Continue reading: Twice-Beaten Beto Says He Wants Toxic Biden to Stay Away from His Gov Race in 2022 ...