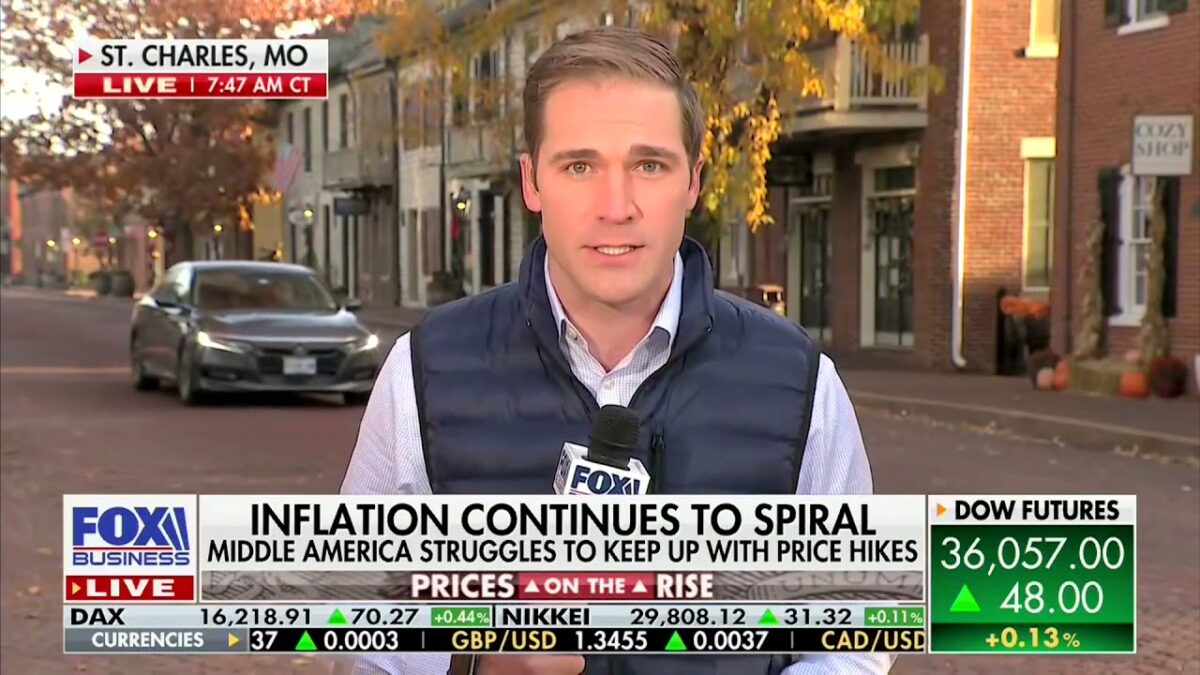 The following article, Fact Check: Biden Says Under His Leadership America Is ‘Leading the World in Economic Growth’, was first published on Flag And Cross.

President Joe Biden embellishes the truth — some would say he lies — regularly, and he was at it again on Monday when he claimed the U.S. is leading the world economically coming out of the COVID-19 pandemic.

He recounted during a White House event, in which he renominated Jerome Powell as chair for the Federal Reserve, that the U.S. has come a long way since unemployment peaked at 14.8 percent in April 2020 to its current 4.6 percent.

Of course what he failed to mention is much of that ground was made up while former President Donald Trump was still in office.

The unemployment rate hit 6.3 percent in January, the month he left.

“And it’s a testament to the economic policies we fought so hard to pass and to put in place, especially the American Rescue Plan,” he added.

Well, the president’s pronouncement is not quite accurate. Actually, it’s false.

China’s Gross Domestic Product will have grown at an estimated 8 percent during 2021, while the United States will be just shy of 6 percent.

CNBC reported China’s economy grew at 4.9 percent in the third quarter, while the U.S. hit a paltry 2 percent, the slowest increase since the end of the 2020 recession.

“Overall, this is a big disappointment given that the consensus expectation at the start of the quarter in July was for a 7 percent gain and even, our own bearish 3.5 percent forecast proved to be too optimistic,” wrote Paul Ashworth, chief U.S. economist at Capital Economics.

“We expect something of a rebound in the final quarter of this year — if only because motor vehicles won’t be such a drag and any negative impact from Delta should be reversed.”

Fortune reported in January that China’s growth rate during the pandemic means that it will overtake the U.S. as the world’s largest economy as early as 2026.

Meanwhile, economists with the U.K.-based Centre for Economics and Business Research estimate Beijing will surpass America in 2028.

“The skillful management of the pandemic and the hits to long-term growth in the West mean that China’s relative economic performance has improved,” the CEBR report said. “We now think that the Chinese economy in dollar terms will overtake the U.S. economy in 2028, a full 5 years earlier than we thought last year.”

Why has the American economy slowed so much under Biden’s leadership?

Here are a few reasons.

First, there is the $1.9 trillion American Rescue Plan, which passed in March with no Republican support.

It incentivized people not to go back to work by extending enhanced unemployment benefits until September and adding a monthly $300 per month, per child tax “credit” — read direct payment — to parents’ bank accounts.

Then, of course, there is Biden’s so-called energy plan.

On day one, he issued executive orders canceling the Keystone XL pipeline and halting oil exploration on federal lands.

The United States is producing nearly 2 million barrels of oil a day less under Biden than it was at its peak under former President Donald Trump, during whose administration the nation became a net energy exporter for the first time in nearly 70 years.

Predictably, with less supply and rising demand, gas prices have risen by an average of a $1.30 per gallon nationwide.

The price of gas impacts everything we buy, so unsurprisingly inflation has hit a 30-year-high of 6.2 percent.

One of the best things the American economy still has going for it is that it is still under the 2017 Trump Tax Cuts and Jobs Act regime, but Biden wants to end that, too.

China stands to be one of the major beneficiaries if Biden and the Democrats manage to pass Build Back Better, with its significant tax increases.

In the name of paying for at least some of the slew of new entitlement programs contained in the legislation, Democrats have proposed raising the corporate tax rate from 21 percent to 26.5 percent.

When combined with state corporate taxes, the U.S. would have an average combined rate of 30.9 percent, the third-highest among Organisation for Economic Co-operation and Development countries.

Under the House tax plan, the U.S. would have the third-highest corporate rate in the industrialized world, behind only Colombia and Portugal: https://t.co/o7UUMh0P5J pic.twitter.com/JxSG1514zg

Under Biden’s plan, the combined corporate tax rate would go from slightly above China’s 25 percent to well above it.

He noted that the Trump tax cuts were a resounding success.

“Within months, our economy took off like a rocket,” he recounted. “America gained more than 7 million new jobs, unemployment plummeted to the lowest rate in 50 years and more than 10 million people were lifted off of welfare — the largest reduction in poverty in modern history.”

“Cutting taxes on American employers was a central part of our efforts to bring jobs and factories back home to the United States — and it worked,” Pence explained.

“After losing 60,000 factories under the previous two administrations, America gained 12,000 new factories, because employers were no longer driven away by an exorbitant tax burden.”

He predicted if the Democrats’ bill passed, “job growth will trickle to a standstill,” with factories once again shuttering and heading overseas.

“Worse yet, China stands to become one of the biggest beneficiaries of the Biden tax hikes,” Pence argued.

President Biden, America is not currently leading the world economically, and your policies are a good part of the reason why.

Keep the tax cuts in place; remove the restrictions you’ve placed on energy development, and the U.S. can once again return to the top spot.

He Can’t be Dumb enough to think we believed His Garbage! He is being insulated from Reality and it shows!

The current unemployment numbers are terribly misleading. 4.6% unemployment among those STILL included in the Labor Force Participation Rate – those with a job or who are actually LOOKING FOR A JOB. The number of people that have ceased working or looking for work is down significantly!