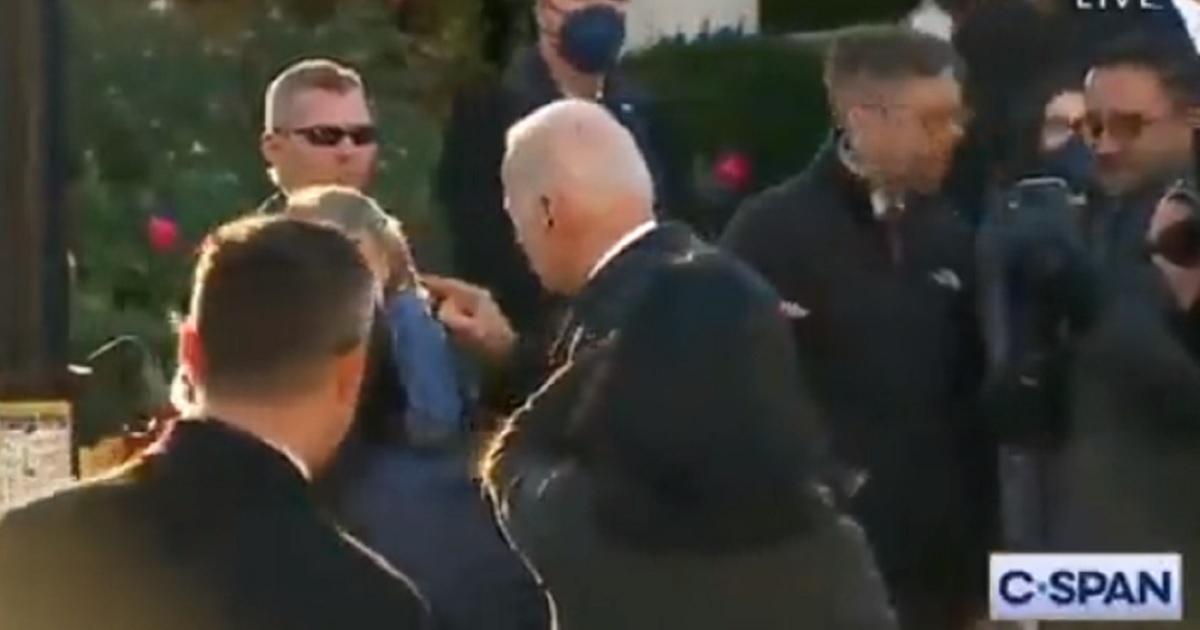 The following article, Watch: Joe Biden Gets Smacked by a Little Girl After He Leans In, Touches Her, was first published on Flag And Cross.

When multiple women accused then-candidate Joe Biden of inappropriate contact in the spring of 2019 during the early stages of the presidential race, he released a not-quite-apology video in which he called the incidents “gestures of support and encouragement” that had been misinterpreted.

He promised to be “much more mindful about respecting personal space.”

“Social norms have begun to change. They’ve shifted,” Biden said in a video recorded on a cell phone.

“And the boundaries of protecting personal space have been reset. And I get it. I get it. I hear what they are saying. I understand.”

Spoiler alert: He didn’t get it.

Yes, we may not have seen as many creepy violations of personal space during the campaign if just because, for most of it, we were all being told to mask up and stand six feet away from each other. During the first few months of the new administration, the newly minted president was also on his best behavior.

However, just as sure as he’d been caught repeatedly on video doing what he was sort-of apologizing for in April of 2019, he’s kept at it in the White House.

Thankfully, some people aren’t having it. I’m not talking about the mainstream media outlets; they couldn’t care less. I’m talking about a little girl caught on camera this week fending off the president’s advances on her personal space.

Here’s footage of the young lady who wasn’t having it at the annual pardoning of the Thanksgiving turkeys at the White House on Friday:

The girl was evidently scared by Uncle Joe, but that didn’t stop him from approaching, pointing his finger at her — at which point, she smacked his hand away.

That exchange didn’t get much play in the media’s coverage of the pardons of Peanut Butter and Jelly.

(Mariana Alfaro’s lede in The Washington Post’s coverage: “It was Peanut Butter and Jelly time at the White House.” That meme turns 20 next year, so way to keep it fresh, WaPo. Was there not a “Gettin’ Jiggy Wit It” reference you could throw in, as well?)

“Turkey is infrastructure,” Biden joked. “Peanut Butter and Jelly are going to help build back the Butterball.”

See? Biden’s infrastructure plan is called Build Back Better, geddit? Ho, ho. For whatever reason, none of his speechwriters saw fit to work in a quip about how Peanut Butter and Jelly weren’t getting pardoned out of compassion but because, since runaway inflation is here to stay, Biden needs them to lay and hatch a whole lot of turkeys so the White House staff can afford to have Thanksgiving next year.

It’s not that one expects front-page coverage from Mariana Alfaro or the Post about creepy Uncle Joe surfacing again during the turkey pardon.

(This is, after all, a dumb and corny bit of Beltway ephemera so despised by this writer that I’d personally pen a 10,000-word piece of effusive praise for the first president — Democrat or Republican — who kills, plucks and dresses the turkeys in front of a horrified White House press pool.)

Absent that, however, you’ll get dumb and corny coverage about Biden’s dumb and corny jokes that glides over yet another little incident proving Biden didn’t really “get it” back when he said he was going to be “much more mindful about respecting personal space.”

And there’s good reason to suspect he never will.

For a refresher on Biden’s history, Donald Trump Jr. posted a video last year compiling “Joe Biden’s creepiest hits.” There was no shortage of them.

This kind of thing shouldn’t be difficult for the president to stop unless, at heart, he cannot conceive of anyone who wouldn’t want him being abnormally affectionate — even little kids — if the whimsy strikes him.

That seems to be the bedrock issue. Since he was  30 years old, and President Richard Nixon was in the White House, Joe Biden has been one of the most powerful men in American political life. Who wouldn’t want him in their personal space, he seems to be saying? He doesn’t mean anything untoward, he just likes showing “gestures of support and encouragement.” Doesn’t everybody want that from the president?

On Friday, the little girl in question was young enough not to know the office of the man offering her a gesture “of support and encouragement,” and she gave him a definitive answer. Perhaps he’ll “get it” now. One has doubts, however.

Continue reading: Watch: Joe Biden Gets Smacked by a Little Girl After He Leans In, Touches Her ...