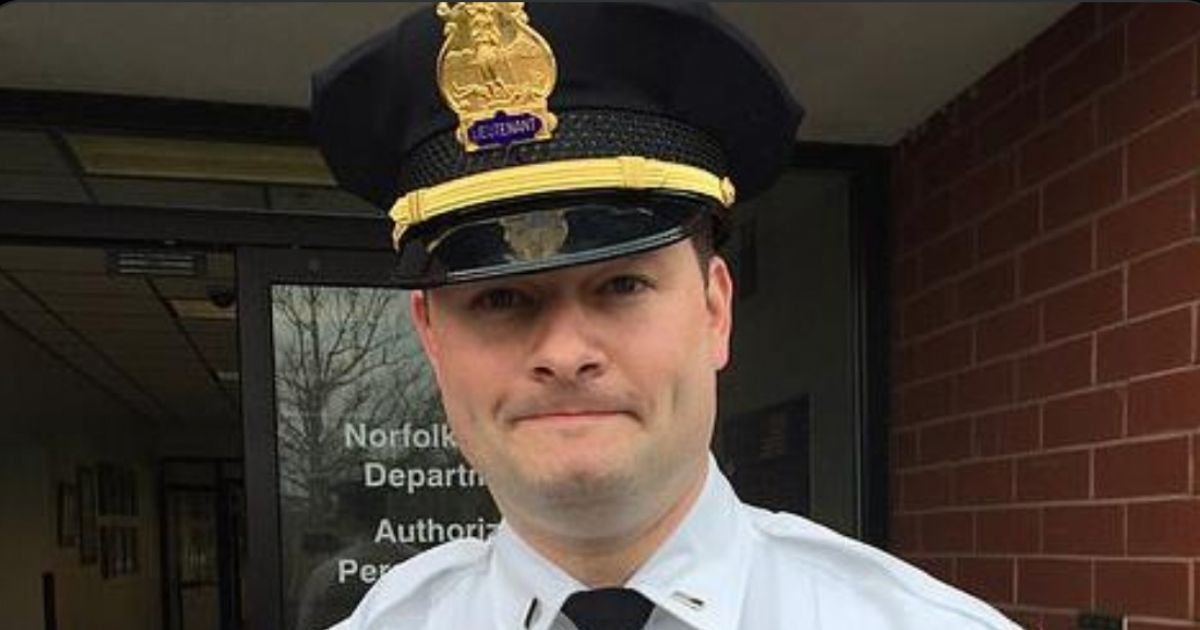 The following article, Veteran Cop Fired for Support of Rittenhouse, Now He’s Demanding Return of His Job, was first published on Flag And Cross.

A Virginia police officer who lost his job after he was outed as having donated to the legal defense fund for Kyle Rittenhouse would like a piece of the justice Rittenhouse received on Friday.

“God Bless. Thank you for your courage. Keep your head up. You’ve done nothing wrong. Every rank-and-file police officer supports you,” he wrote at the time, according to the Daily Mail.

When hackers spilled his name along with others supporting Rittenhouse, the donation became a major issue in Norfolk, and he was fired, even after 19 years on the job.

“His egregious comments erode the trust between the Norfolk Police Department and those they are sworn to serve,” City Manager Chip Filer said, according to The Washington Post.

“The alleged statement and action by a member of Norfolk’s Police Department is alarming and by all means not consistent with the values of our city or the standards set for our employees,” Norfolk Mayor Kenneth Cooper Alexander chimed in.

Even Norfolk’s police chief joined in.

“I want the residents of Norfolk to know that their police department will represent and uphold our organizational values of Service, Honor, Integrity, Equality, Leadership, and Diversity,” Norfolk police chief Larry D. Boone said. “A police department cannot do its job when the public loses trust with those whose duty is to serve and protect them.”

But now with Rittenhouse being found not guilty, Kelly wants his job back, according to the Daily Mail.

He has support from several people online, including Candace Owens.

Today I started a fundraiser for Lt. Bill Kelly—17 year police veteran who was fired in April after the despicable @guardian revealed that he anonymously donated to Kyle Rittenhouse’s legal defense.
Please share and support!https://t.co/OIOsTbXU56

Kelly said his support for Rittenhouse was not political, but based on his opinion of the evidence relayed by the media.

He said he wanted Rittenhouse to have “the chance to defend himself in front of a jury. I know that lawyers are expensive, and it’s hard sometimes to get the message out there. I wanted to make sure that he had the means necessary to make his claim in court.”

He said he did not want the police department linked to his personal opinion and recalled the outpouring of hate when his anonymous donation became linked to him.

“It wasn’t people local, it was people from all around the country who read an article and sent a nasty tweet. In the absence of that outcry, there would not have been any kind of disciplinary action against me, I’m confident,” he said.

Kelly said his opinion on the Rittenhouse case was purely personal.

“This is America. You can agree with your neighbors and other people in your community, and you can disagree with them. Just because someone has a different opinion than you, it doesn’t mean you should destroy their lives, take their job away. My opinion on the self-defense claim of Mr. Rittenhouse has no impact on my ability to do my job as a police officer,” he said.

Kelly noted that the chief who condemned him marched in a Black Lives Matter event in full uniform.

“The hypocrisy is dumbfounding. For the leader of our organization to be able to advocate support for a movement that is at the very least divisive in America today, in uniform while on duty … he was holding carried the name of a person who had recently been shot by a Norfolk police officer,” he said. “Yet I cannot, off-duty, on my own time make a donation and some comments that are well within the realm of public, acceptable discourse?”

Kelly said police officers who are not part of a liberal clique fear they will become targets if their real views are known.

“It made me feel disposable. Not only how it affected me, how it affected other officers. I was contacted by others who said they immediately deleted their social media accounts after I got fired out of fear that they would go through them and find something innocuous to use against them,” he said.

“I’ve been contacted by officers who say, ‘What if Trump runs in 2024 and I put a sign for him in my front yard, can media get a hold of that? If enough people complain, will I lose my job?’ The effects of this kind of censorship are wide. It ripples through the entire department. It’s a chilling effect,” he stated.