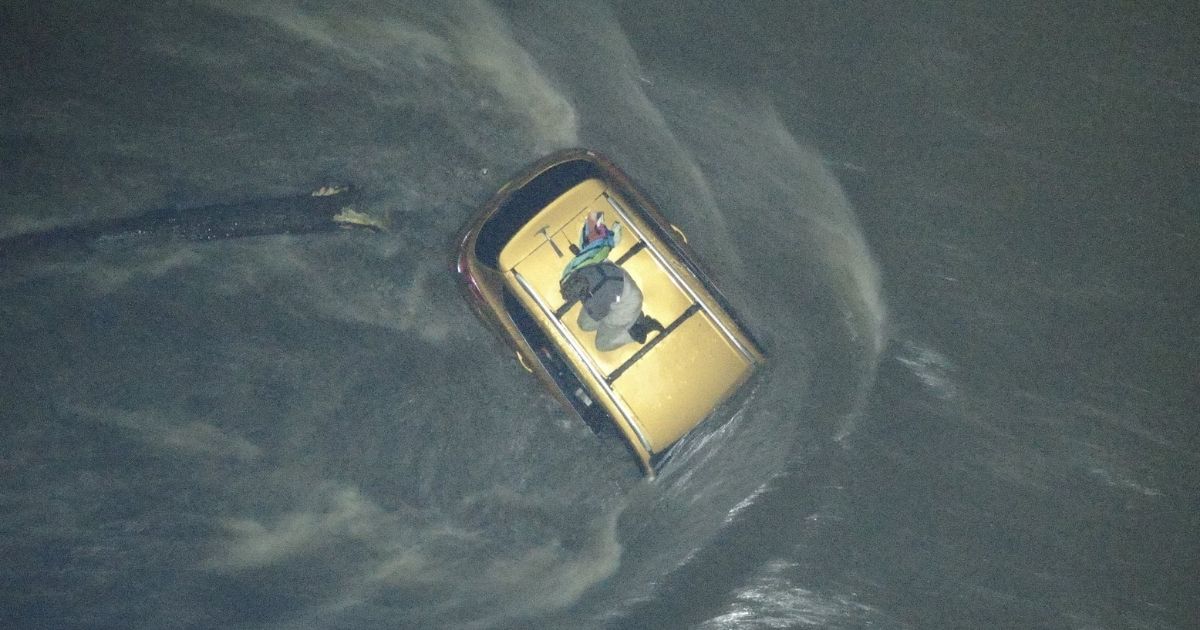 The following article, Woman and Dog Rescued Moments Before It’s Too Late: Car Plunges Into River, was first published on Flag And Cross.

Around 10 p.m. Saturday, Laura Larsen was about to cross the Yakima River in Yakima County, Washington, something she’d done dozens of times without incident.

She later told the Yakima Herald that she was familiar with the area, as she’s a bit of a rock hound and enjoys perusing the river and its surrounds for interesting formations and rare rocks.

But this time was different. This time, the water level was too high — and she didn’t realize it until she was in too deep.

“[W]e were on a gravel area near the river just across a shallow side channel we’ve been across frequently,” Larsen wrote in a comment on Facebook on Sunday. “Unfortunately, the water level rose quickly and drastically, and the fog contributed to a huge misjudgement as to depth, in our attempt to return to safety.”

Despite the initial error in judgment, she was able to quickly do exactly what needed to be done once she realized her predicament.

“When the engine died, we were swept downriver so quickly, there wasn’t time to do much more than get the windows down before the power failed, grab my phone, and get onto the roof to call for help,” she explained. “I was able to break out the rear window and get my dog out onto the roof with me.”

Larsen said the dog, Bailey, is her service animal.

Thankfully, rescue teams were on the scene in short order and the car stayed at least partially afloat until help arrived.

After using a drone to locate Larsen and her pup, the Yakima County Fire District #5 and City of Yakima Fire Department were able to send a raft out to them.

“Just before 10 PM last night, units were dispatched to a reported Water Rescue,” the district posted on Facebook. “Using [forward-looking infrared]-enabled drones, a woman, along with her dog, was located stranded in the Yakima River, on top of her vehicle.

“Using a raft, the woman and her dog were removed from the roof of the car. The raft drifted downriver to additional first responders. The woman was treated by EMS personnel and released to herself and her family.

“This is a great example of teamwork between multiple agencies.”

Based on her comments on the fire district’s post, Larsen has a good attitude about the whole ordeal. Many have criticized her decision to cross in the first place, but she admitted her mistake and was thankful for the swift rescue.

“Not my proudest moment or top 10 favorite experiences, but we made it out safely by God’s grace and the actions of those incredible folks,” she wrote. “Grateful.”

Larsen’s mom popped into the comments as well to voice her appreciation for the first responders.

“Thank you to everyone who got Laura and Bailey out of the river!” Kathy Marie Larsen wrote. “As her mother, I appreciate all of you so very much!”

As for Larsen herself, she’ll be avoiding any repeat instances, saying, “I could do with a bit less excitement for the next few months or decades.”