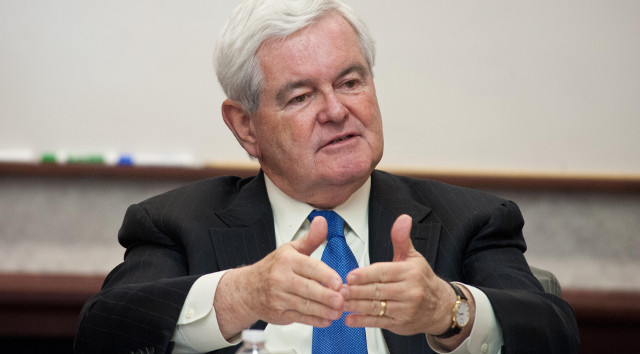 Former Speaker of the House Newt Gingrich equated current Speaker Nancy Pelosi to a “dictator” over her current stint presiding over the lower chamber during an interview this week with Turning Point USA founder Charlie Kirk.

With House Minority Leader Kevin McCarthy widely expected to take the gavel after the Democrats take their beating in 2022, Kirk asked the former speaker and presidential candidate if he had any words of advice for the California Republican.

Gingrich went for the jugular when speaking about Pelosi on “The Charlie Kirk Show.”

“It’s very hard job. And he has done a balancing act. He’s faced with a dictator,” he added of Pelosi.

“And I mean this literally: Nancy Pelosi runs a dictatorship,” he said. “She kneecaps people. She coerces them, she does things to Republicans that are a violation of 240 years of American history and she is extraordinarily destructive freedom.”

“She’s a thug,” he added. “She brutalizes people, she runs over them. She establishes rules that are crazy.”

He also accused House Democrats under Pelosi’s leadership of subverting rules when meeting with “whistleblowers.” He told Kirk that Democrats often conduct their dirty business away from the Capitol so as to avoid having to be transparent by not having their guests check in with the Capitol Police.

“She has established on the House side of the hill a dictatorship, and literally … the Senate today is much freer and much more open than the U.S. House,” Gingrich also said. “It’s truly humiliating. And you can see that everything we think of as freedom is being crushed by the Pelosi dictatorship.”

“I think it’s truly more frightening than the Justice Department, because in the end, if you end up with a Congress which is totally dictatorial, it will then lead to an even more dictatorial government,” he concluded of Pelosi.

Pelosi has of course unilaterally forced her mask mandate on House members. Just this week, Republican Rep. Marjorie Taylor Greene of Georgia announced she had accrued $60,500 in Pelosi’s mask fines.

I have $60,500 in mask fines from Nancy Pelosi, who is a hypocrite because she does not wear a mask at times.

Here she is during the vote on Infrastructure bill, with her mask down.

Of course, who can forget that Pelosi also initiated a military occupation of the U.S. Capitol grounds earlier this year that lasted months. That occupation was handled by partisan Gen. Russel Honoré:

I salute the urgent, diligent & strategic work that he and his team continue to do in this mission. https://t.co/tHYs94ZDaF

Then there was this week’s Pelosi-backed censure of GOP Rep. Paul Gosar of Arizona regarding a meme he posted online.

Is there anything more dictatorial than a tyrant eating ice cream on late-night television while people across the country worry about their next meal? Is there anything more thuggish than a woman whose district was locked down last fall while she enjoyed being catered to by a hairstylist?

BREAKING: Nancy Pelosi’s office has confirmed the speaker got her hair cut indoors in a San Francisco salon, but released a statement claiming she didn’t know she’d done anything wrong. https://t.co/cEEr1p074r

Nancy Antoinette, as some began to call her last year, has taken the speakership in a dangerous direction. Like other Democrats in the COVID era, she revealed herself as little more than a power-hungry bully with no interest in holding historic mores or basic ethics.

As Gingrich so eloquently put it, the woman is a dictator.